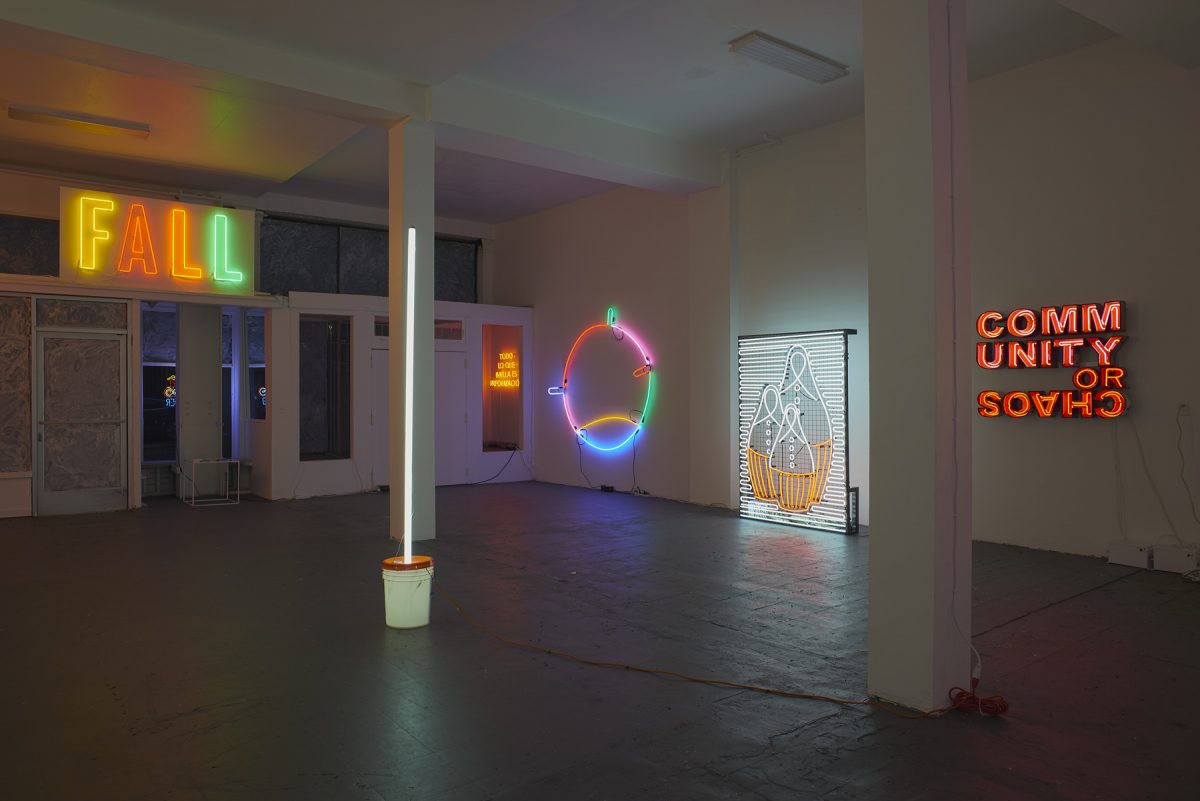 An illumination by Jens Hoffmann

As far as we can discern, the sole purpose of human existence is to kindle a light in the darkness of mere being.

Ever since the Big Bang created our universe more than ten billion years ago, our Earth has been bathed in light coming from the sun. Light is mentioned in the third verse of the Book of Genesis—the first book of the Hebrew Bible (the Tanakh) and the Christian Old Testament—in which God creates the world and illuminates it by saying, “Let there be light.”

Light, and in particular sunlight, is an essential source of energy and has an incredible effect on how we wander through the world. Every schoolkid knows that thanks to photosynthesis, plants thrive and grow to serve as an essential part of the food chain, not to mention also producing the oxygen we breathe.

Ever since the Greek philosopher Plato proposed his famous allegory of the cave—that the world we see is not the real world, and that philosophers have an obligation to tell the rest of society about authentic existence outside the cave—light has also functioned as a metaphor for education, knowledge, spiritual and intellectual liberation, and hope. We are “illuminated” or “enlightened” with intelligence; light draws us out of “darkness” by puncturing ignorance with bright “rays” of wisdom.

Over the centuries humans have conjured other sources of light. Fire was the earliest, used in the caves of our ancestors as well as in the candles and spirit lamps that were still the main generators of light after dark only one hundred years ago. Today we rely almost exclusively on light powered by electricity, which began with the invention of the incandescent bulb by Thomas Edison and progressed to fluorescent lighting and contemporary light-emitting-diodes, or LEDs.

We have also learned to control light, using it to illuminate our houses and city streets at night, as well as to communicate with one another, as in brightly lit advertising logos, glittering entrance signs to bars and restaurants, and dazzling theater marquees. More practical uses include lighthouses to help boats navigate, Morse code flashes between ships at sea, and the ubiquitous traffic lights around our cities.

One popular source of artificial light, whose heyday came in the mid-twentieth century, is neon. The French scientist, inventor, and engineer Georges Claude is widely considered the father of the neon tube; he was building on the inventions of Heinrich Geissler and other scientist-inventors such as William Crookes, Johann Wilhelm Hittorf, and Daniel McFarlan Moore. In 1910 Claude patented his discovery that neon produces light but (crucially, for its commercial applications) not heat when electricity passes through it. Bright, colorful, bended neon tubes soon began appearing in outdoor advertising of all kinds. One of the first and most celebrated instances was the large sign for the Italian vermouth manufacturer Cinzano, which starting in 1913 illuminated Paris above Boulevard Haussmann with white letters about a yard tall. The first neon signs in the United States arrived from Claude’s company in Los Angeles in 1923: a pair of signs for a Packard car dealership run by the American businessman and industrial pioneer Earle C. Anthony.

“Let There Be (More) Light” features twenty-one artists who use light as a medium, and who look to the early pioneers of neon and fluorescent art for inspiration. There are many connections between light and art. The most direct one is that they both enable enlightenment—one literally, by bringing light into a dark space, and the other intellectually and aesthetically. In “Let There Be (More) Light” the artworks on display are intended do both simultaneously. Indeed, it is difficult not to think of Plato’s allegory of the cave in the context of the exhibition, given the architecture of the gallery space: two tall but small rooms in a cave-like storefront in San Francisco’s bustling Tenderloin neighborhood, a socially and economically heterogeneous zone marked by a distressing and conspicuous collision of concentrated poverty, homelessness, and crime on the one hand and enormous prosperity, wealth, and achievement on the other. The site embodies the contradictory nature of the larger world today in a direct, unidealized, and rather rare manner.

Dan Flavin is probably the best-known artist to work with light in the gallery space. He introduced the concept to the art world in the mid-1960s, in the very early days of Minimalism, when he diagonally mounted an industrially fabricated fluorescent light tube onto a gallery wall. Another forerunner in the use of light as an art material is Robert Irwin, who was associated with the Light and Space movement in California (focusing on the sensory experience of art), and used neon in a less sculptural and more tactile way than Flavin. Other iconic artists who have worked with light include Bruce Nauman and Keith Sonnier. Nauman’s neon works critically examine advertisements and consumer culture, making direct allusions to early commercial neon signs, often with a dark sense of humor. Sonnier has created understated, abstract sculptures with neon lights and other materials such as glass, wire, latex, metal, and even bamboo. He radically reinvented the idea of sculpture in the late 1960s with pieces that, specifically because of his use of neon, can be seen as drawings in space, dialoguing with the architecture surrounding them. Joseph Kosuth is another artist who started using neon early in his career, often in sober and formally restrained ways related to his focus on text and language. He was trying to reduce the work of art to pure communication, information, or ideas, and rejected the traditional notion of the aesthetically elaborate, visually pleasing art object.

Both Sonnier and Kosuth present works as part of “Let There Be (More) Light” alongside a wide range of more recent works by artists from around the globe who all consciously reference the early creators of neon and fluorescent art and continue to pursue their concerns. In their hands, light is a vernacular medium producing bright communications and glowing forms, political manifestations and social critiques. They are renewing popular and critical interest in the history of art made with light and ensuring its continued relevance in the twenty-first century. 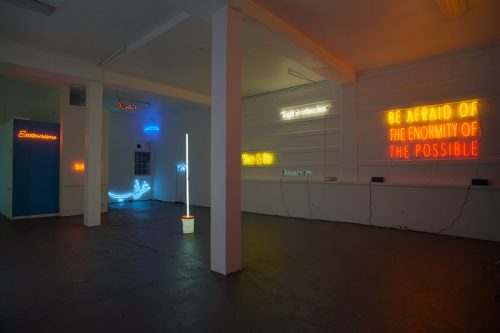 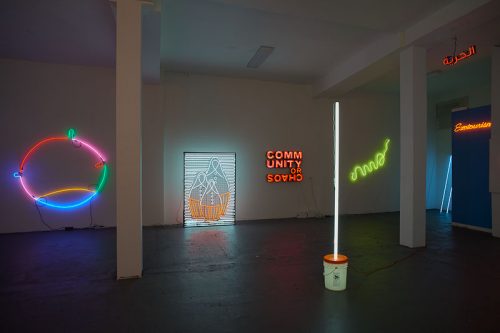 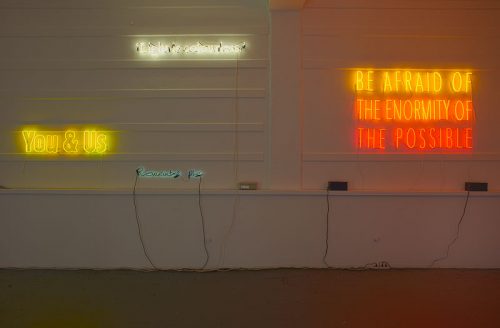 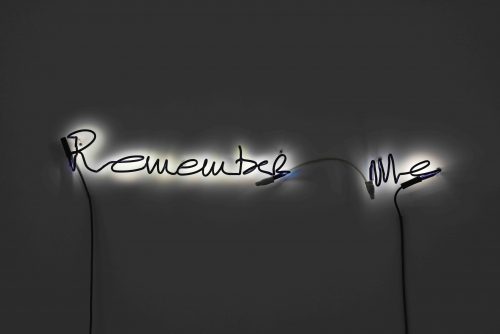 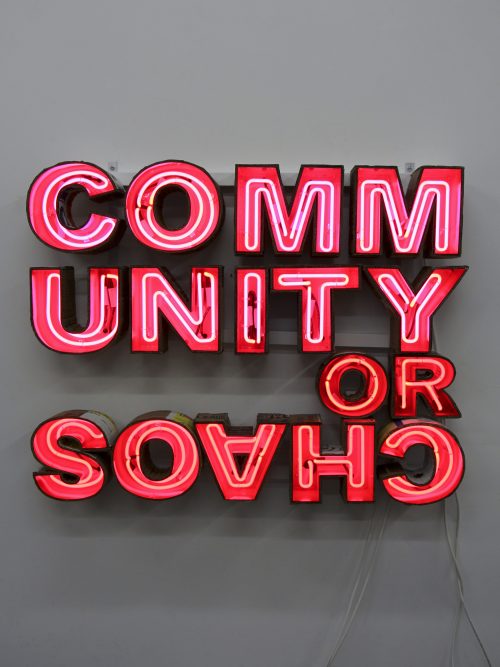 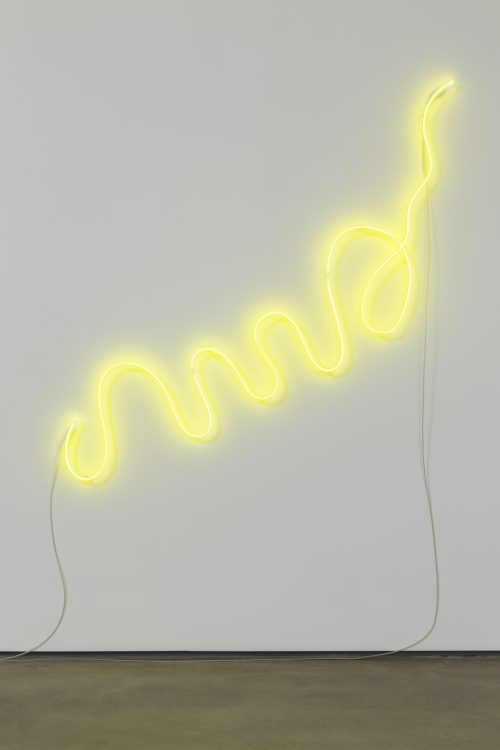 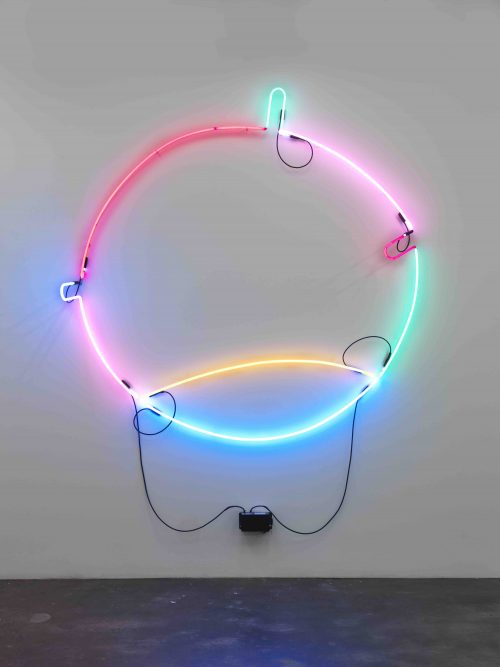 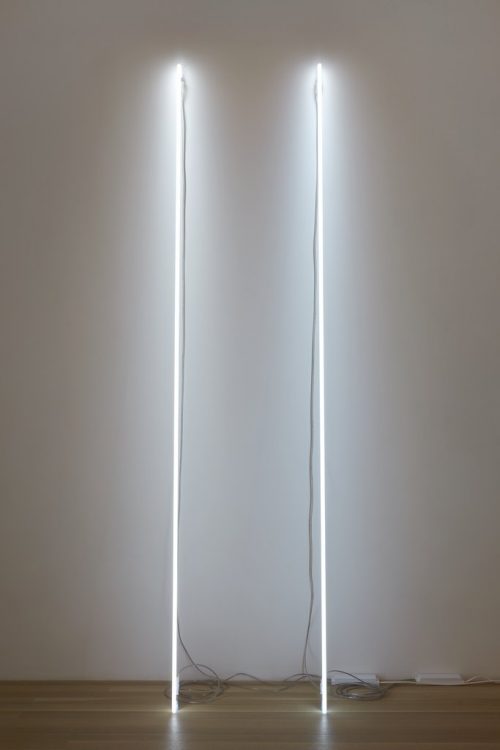 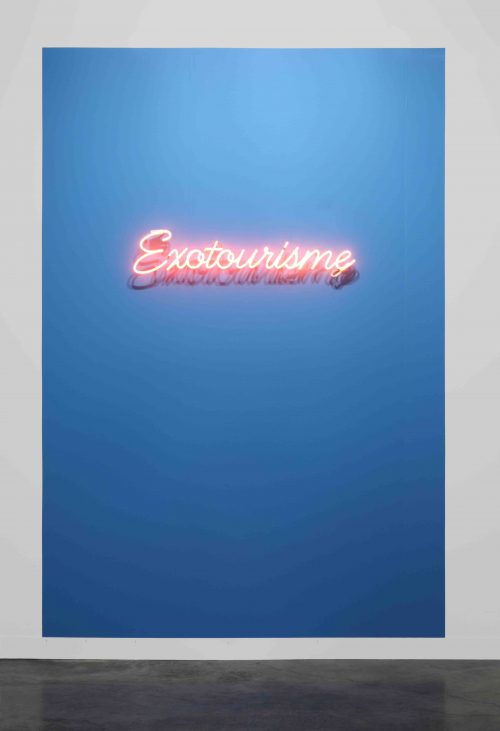 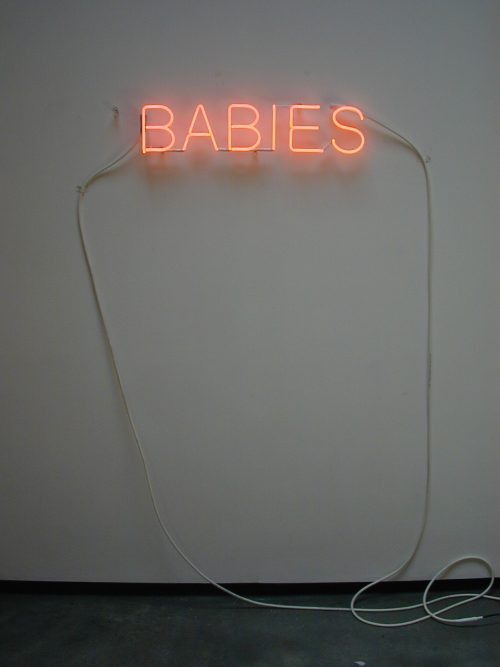 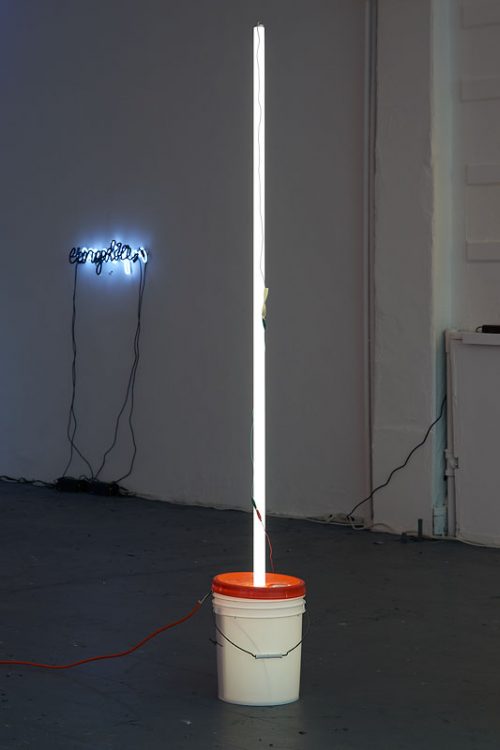 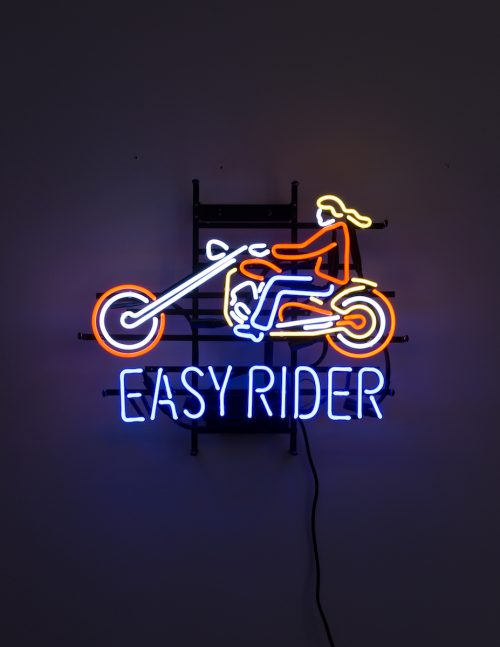 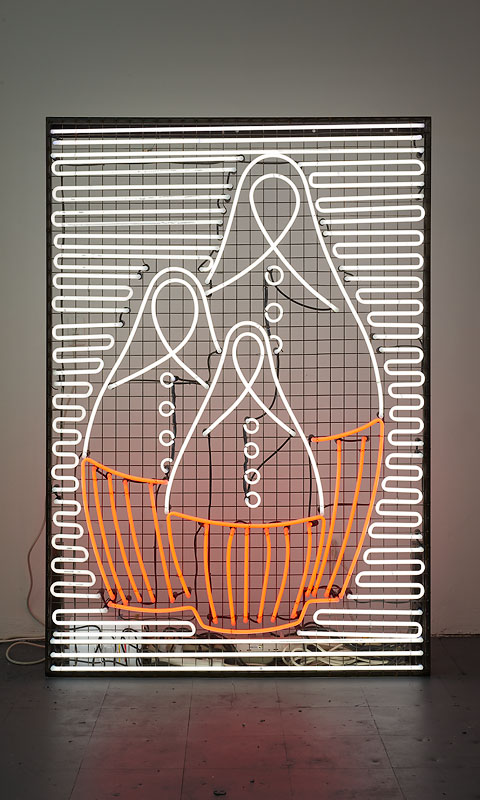 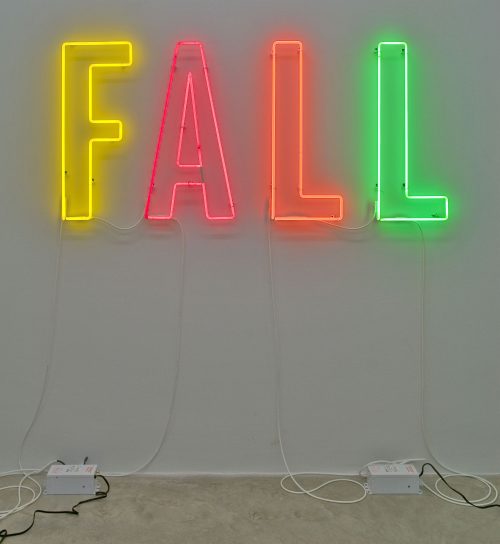 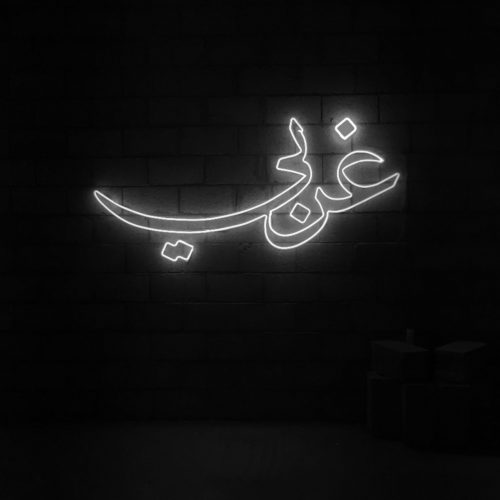 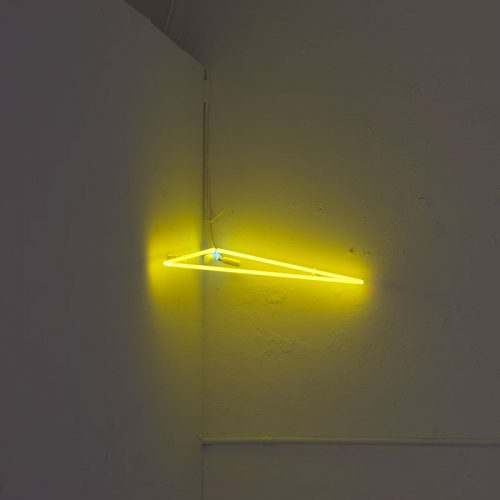 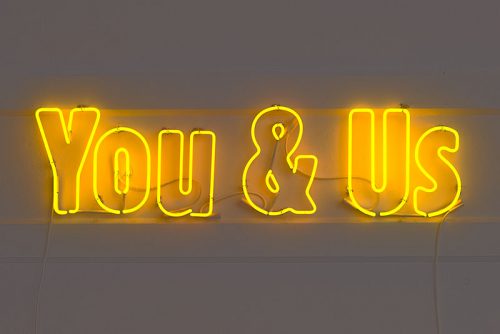 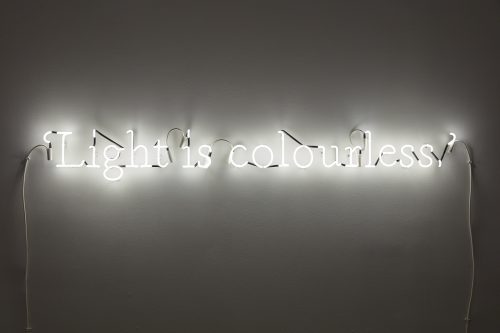 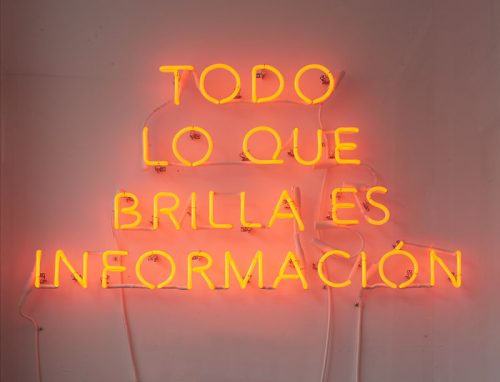 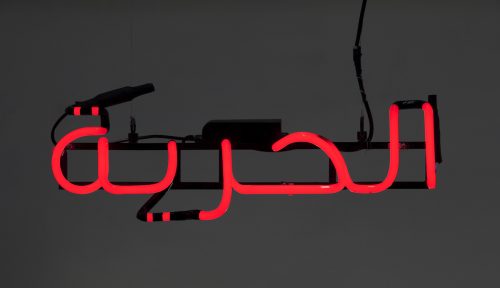 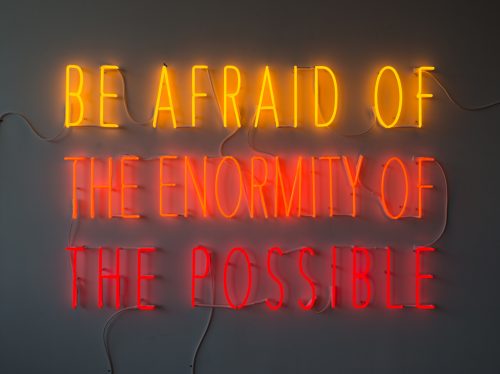 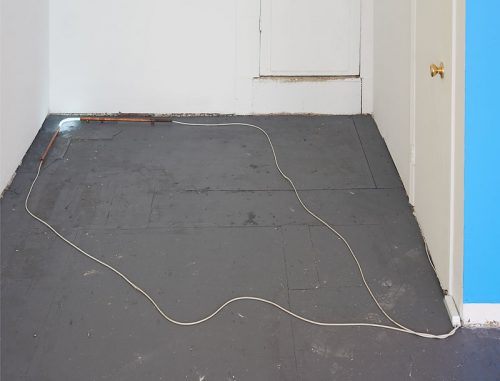