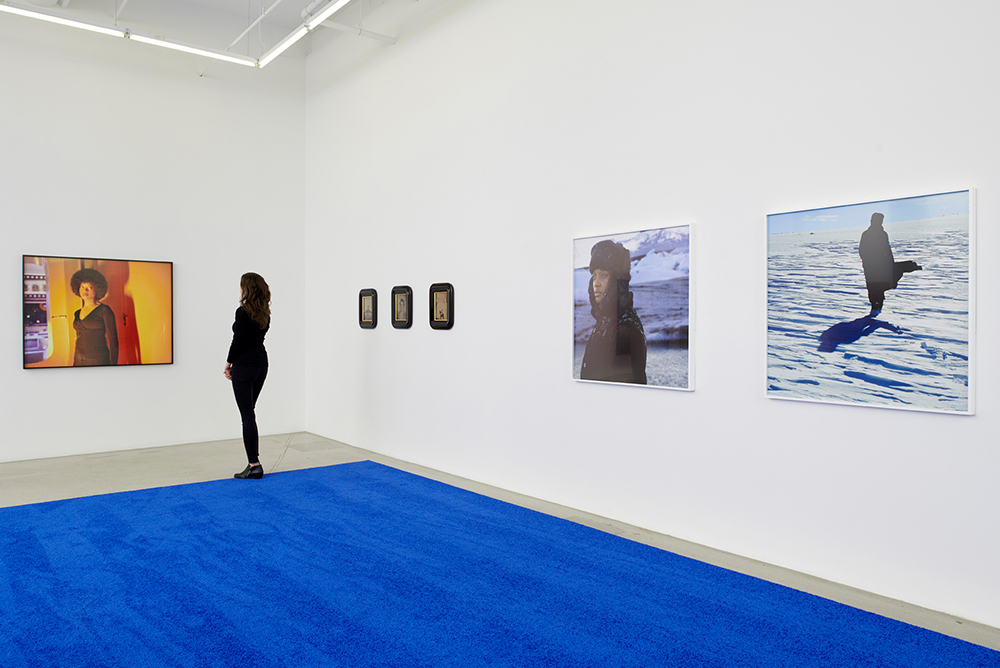 Jessica Silverman Gallery is pleased to present “Isaac Julien’s America,” a solo show of new and historic works about the struggle for freedom and equality in a globalized world. The show is inspired by three pioneers: Frederick Douglass, an ex-slave, orator and the most photographed man of the nineteenth century; Matthew Henson, the African-American explorer who discovered the North Pole; and Angela Davis, the radical feminist and former Black Panther turned social justice activist. The photographic works in the exhibition interrogate and “creolize” the genres of portraiture, landscape, costume drama and Blaxploitation film. Together, they explore an imaginary country with expansive borders, a cluster of historical subcultures that are united by their desire for pride and self-possession, a diaspora vision that seeks to infiltrate contemporary America’s sense of itself.

Julien’s perspective on America has its roots in long personal letters written by his grandfather, who lived in Brooklyn, NY, to his mother, who resides in London, England. Throughout his childhood, Julien’s St Lucian parents regularly discussed the prospect of re-uniting with family and pursuing a better life by migrating to North America. However, the artist didn’t end up stepping foot on American soil (or meeting a grandparent) until he was 24 years old when he attended an independent film conference in Manhattan. Since 1984, Julien has lived in the US on and off and, in 1989, set Looking for Langston in Harlem.

Conversation between Isaac Julien & Sarah Thornton was shot on March 14, 2020, by Dana Morrison and edited by Adam Finch. Opening reception: Friday, March 13, 6-8pm
Lessons of the Hour (2019) re-imagines significant moments in the life and work of Frederick Douglass. Created in consultation with Professor Celeste-Marie Bernier, the work is informed by three prophetic speeches by Douglass – “What to the Slave is the 4th of July?,” “Lecture on Pictures” and his final talk, “Lessons of the Hour.” Shot in Washington, D.C., England and Scotland, Lessons of the Hour has an intriguingly ambiguous geography and features a range of historical figures committed to human rights, including: J.P. Ball, the African-American photographer; Anna Murray and Helen Pitts, Douglass’ wives; Anna and Ellen Richardson, the English Quaker sisters who purchased Douglass’s freedom; and Susan B. Anthony, the suffragist who was his longtime friend. 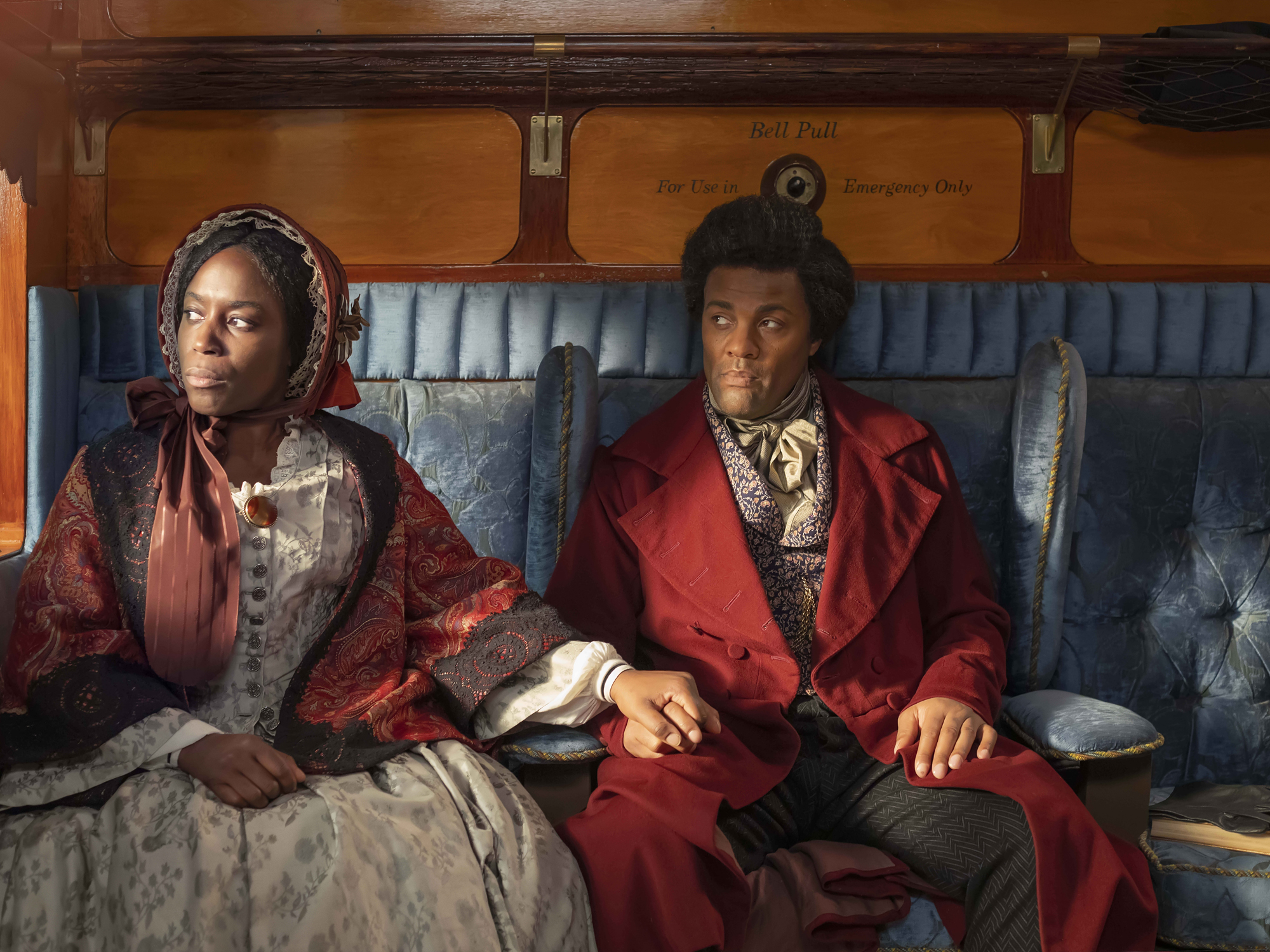 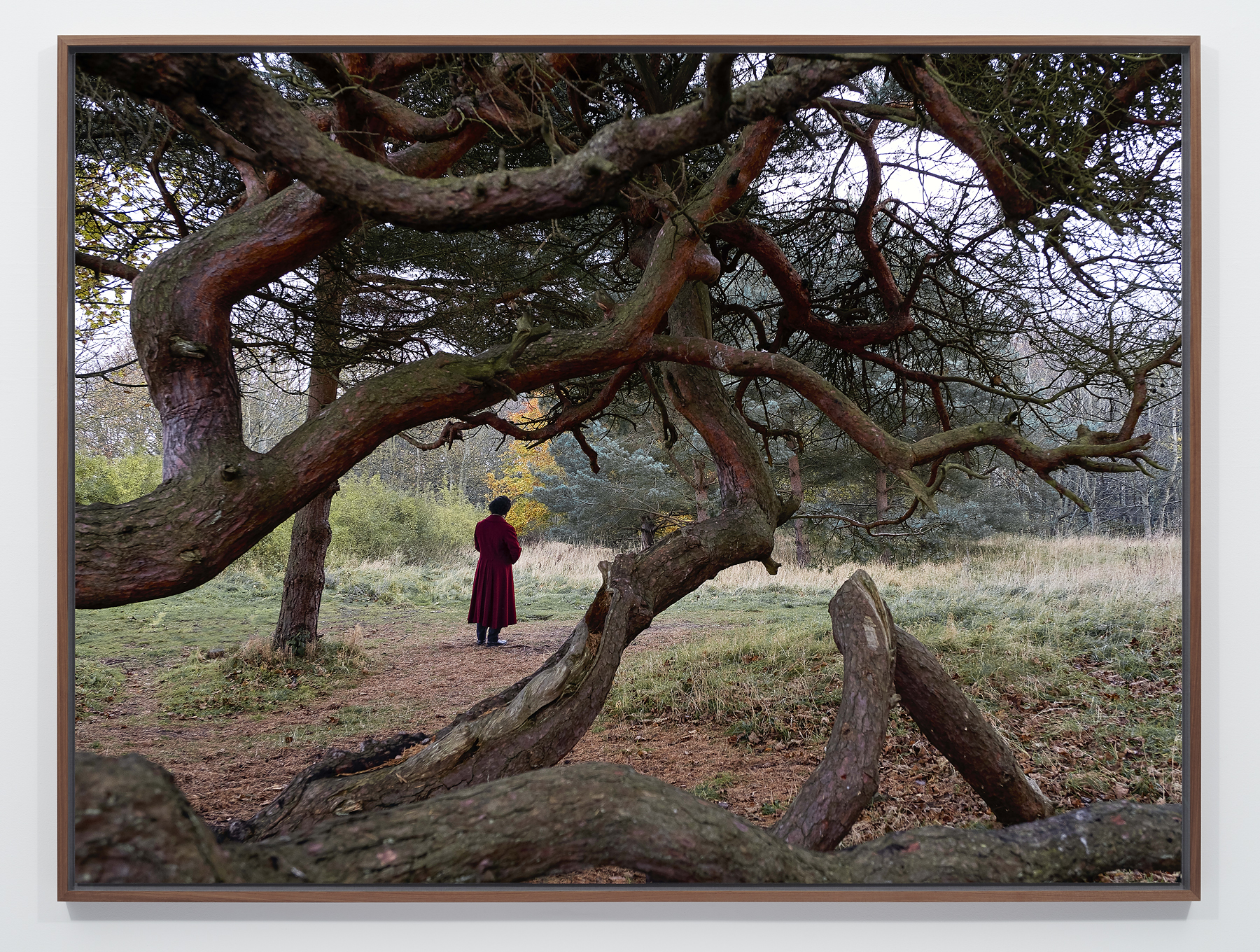 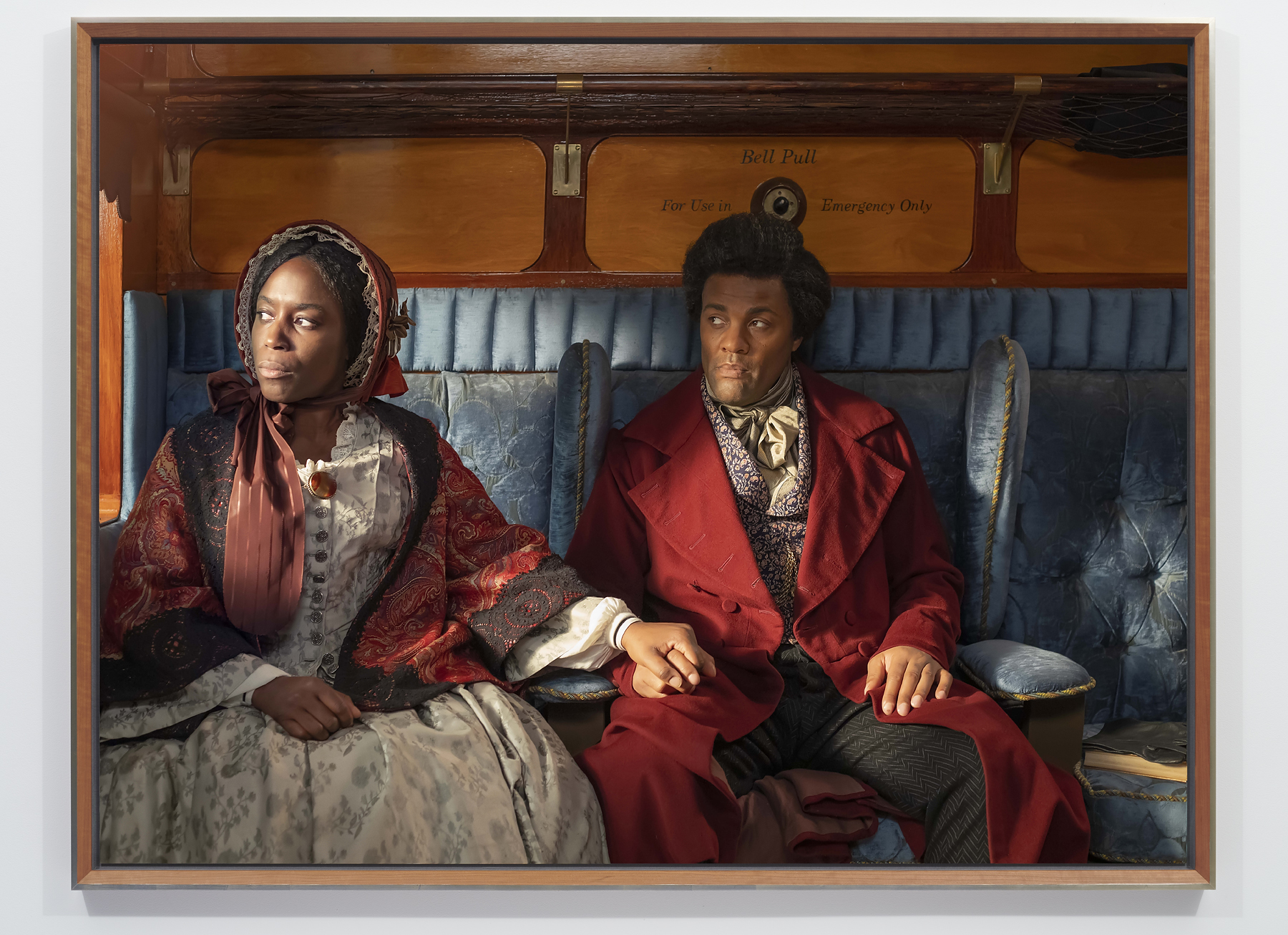 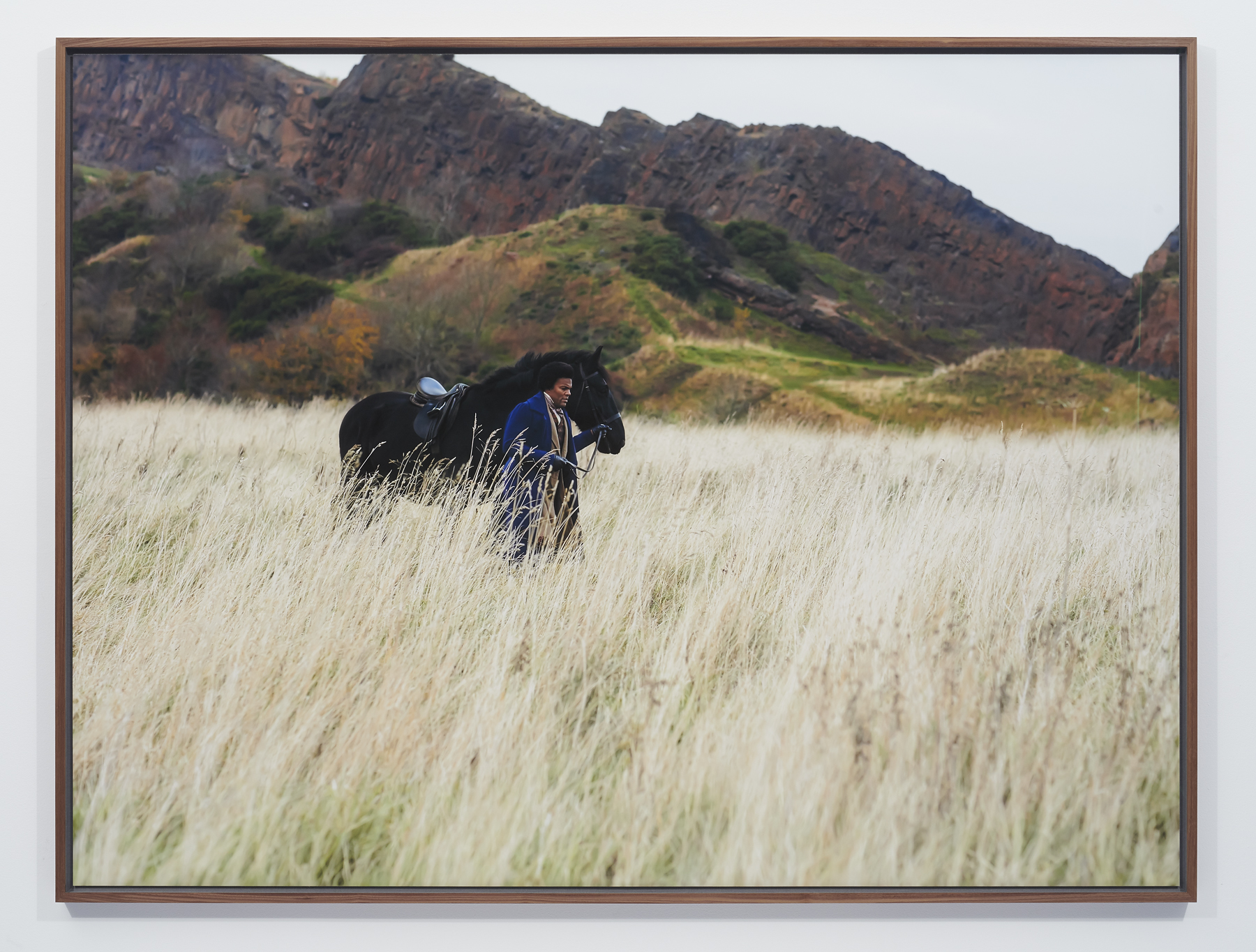 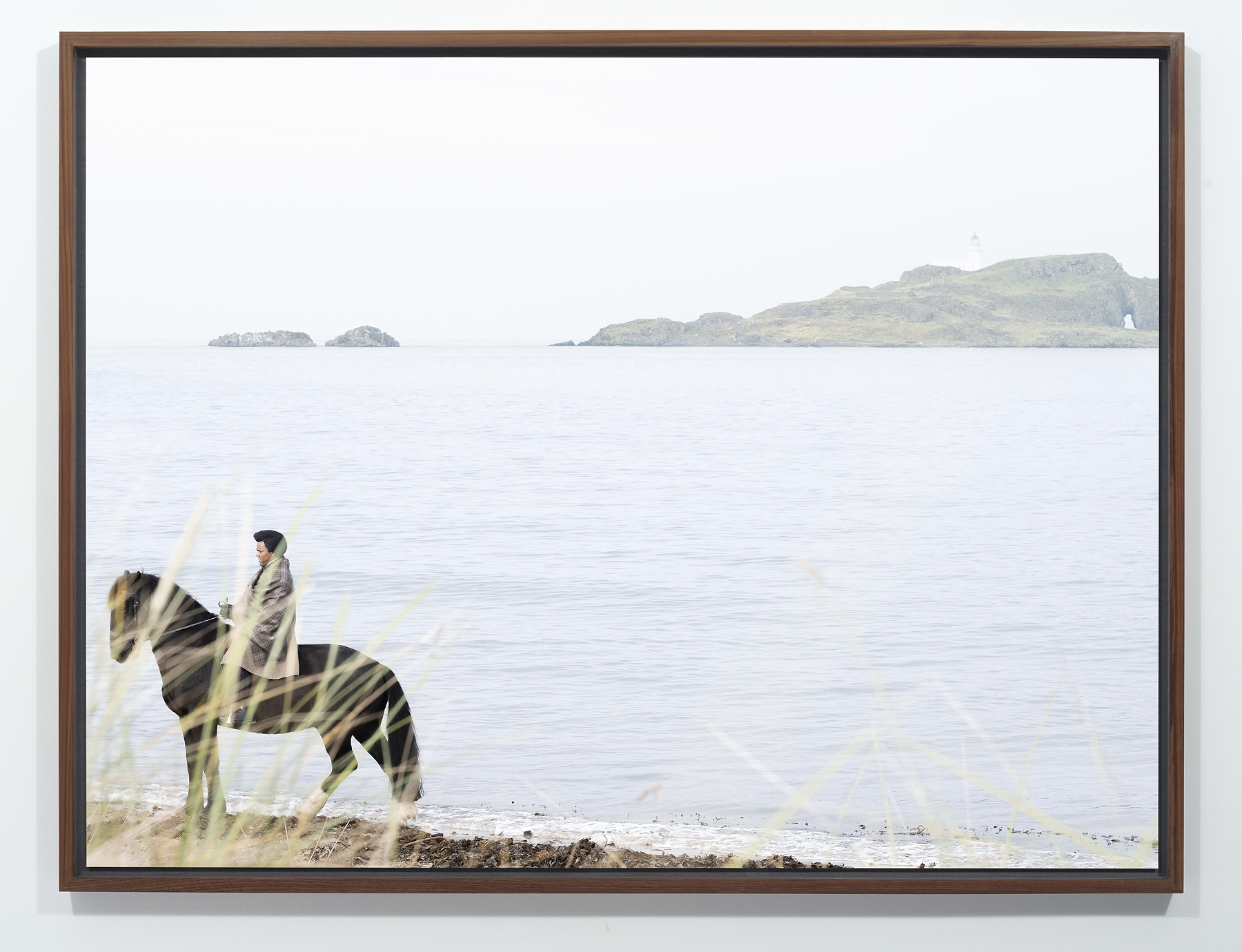 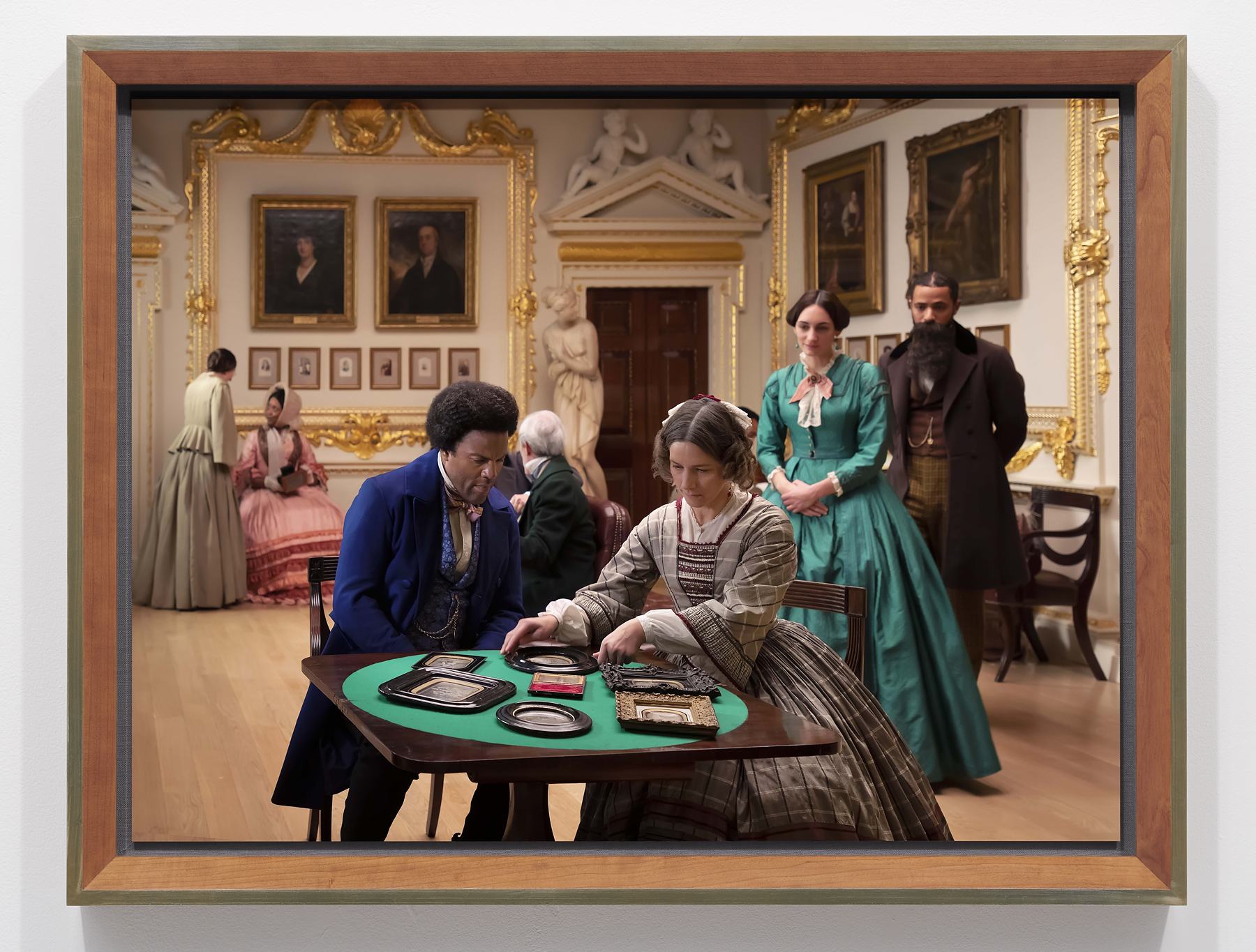 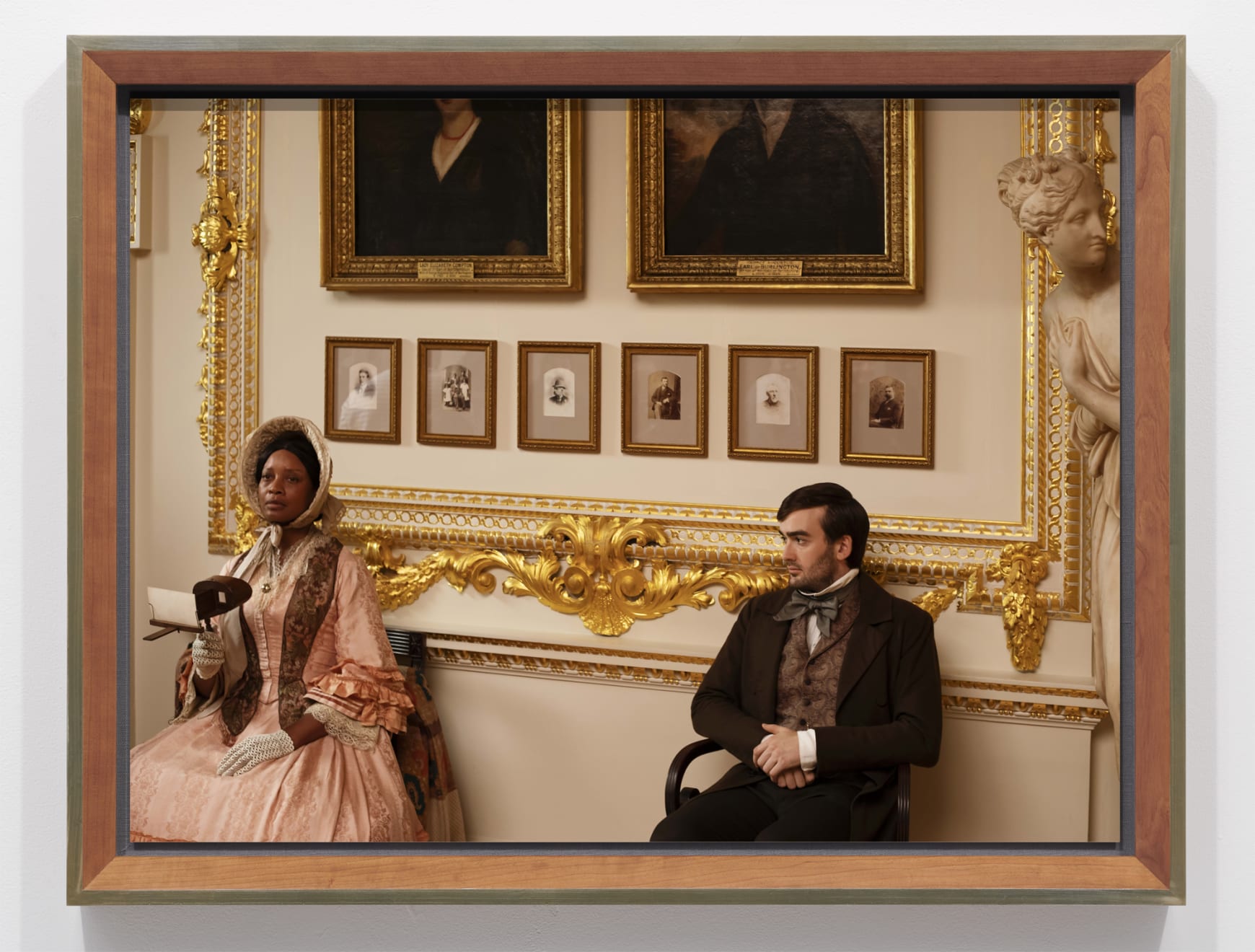 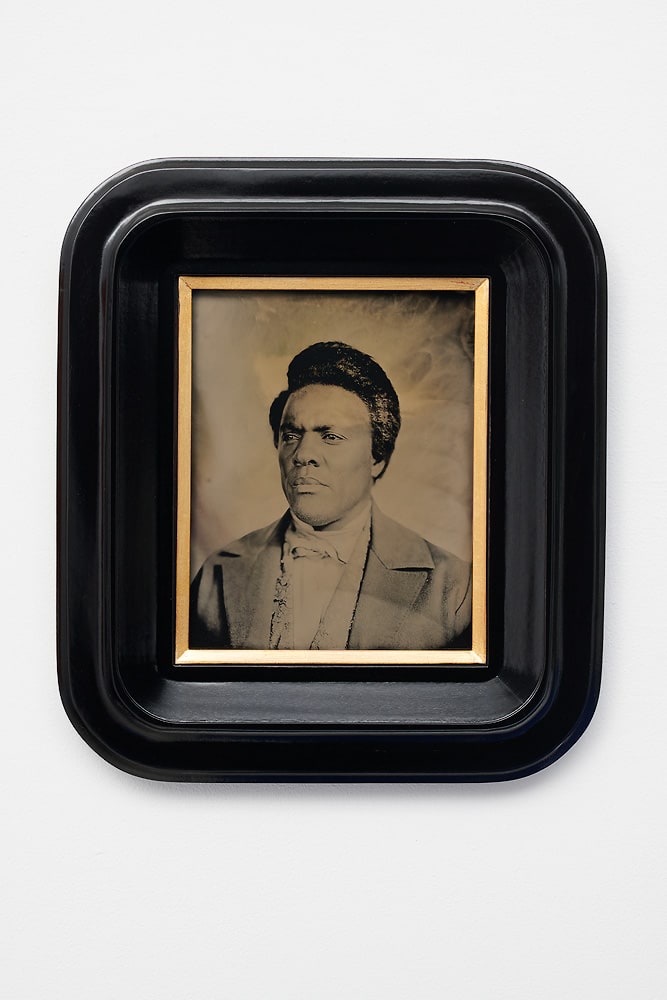 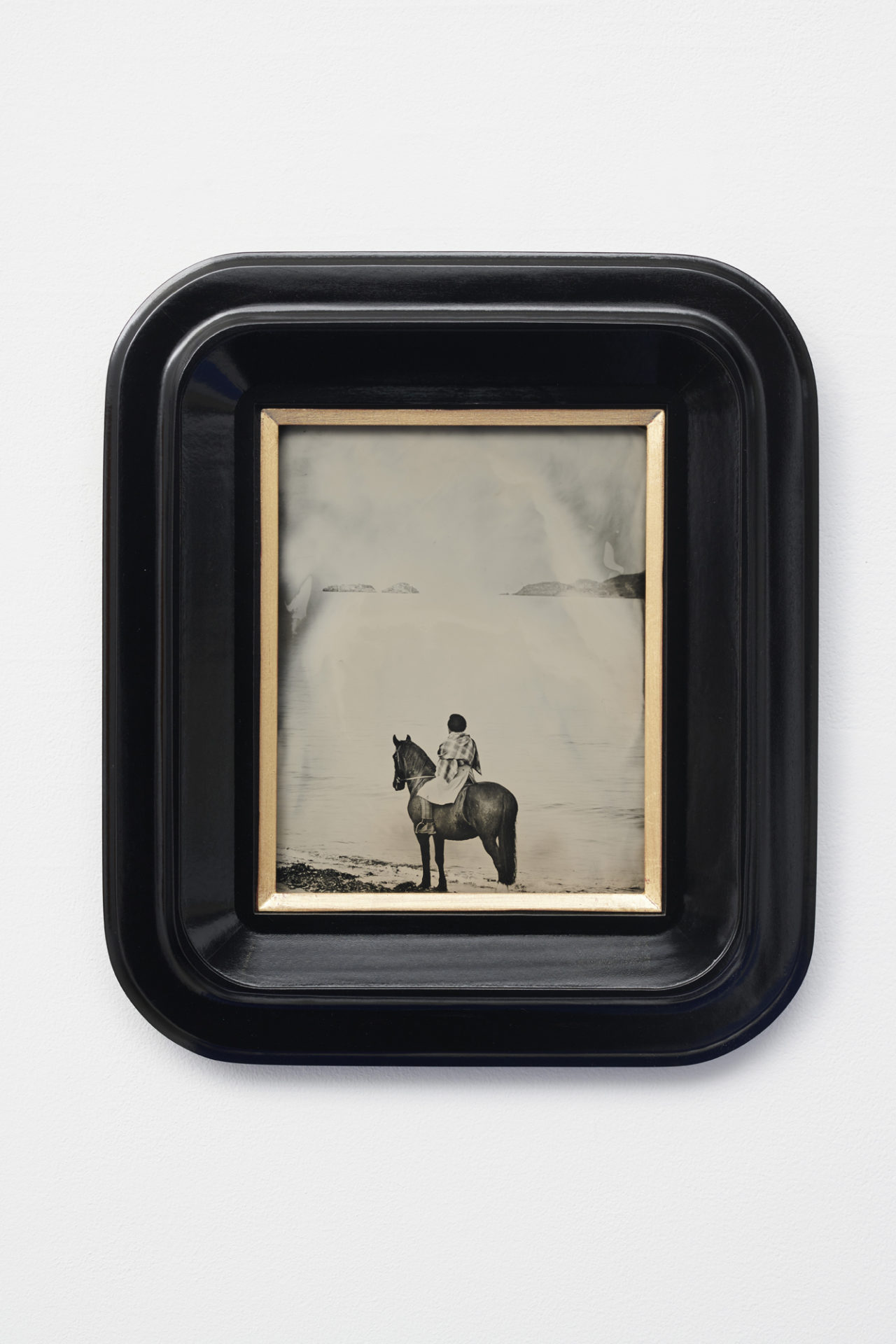 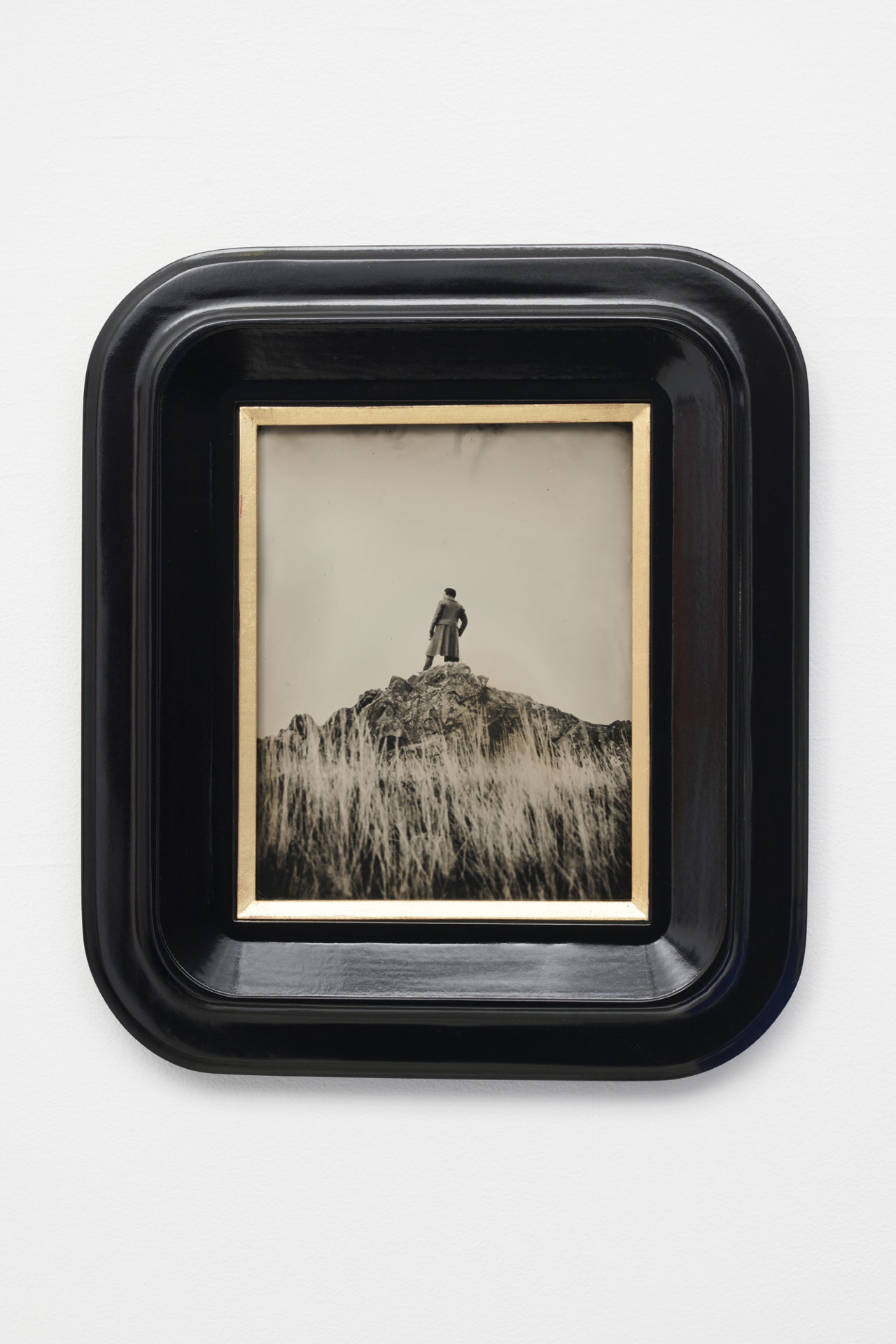 Isaac Julien
Lyrics of Sunshine and Shadow (Free Within Ourselves), 2020
Wet-plate collodion tintype mounted on tulipwood frame
16 7/8 x 14 7/8 inches / 43 x 38 cm
Edition of 3 + 2 AP
INQUIRE
Lyrics of Sunshine and Shadow (Free Within Ourselves), 2020
“Isaac Julien’s America” also features small black-and-white tintypes, titled Lyrics of Sunshine and Shadow after a poem by Paul Laurence Dunbar, one of the first African-American writers to acquire an international reputation, who Douglass once described as “the most promising colored man in America.” Lessons of the Hour is also comprised of a ten-screen film installation, which premiered at Memorial Art Gallery in Rochester, New York, and will open at the McEvoy Foundation for the Arts in San Francisco in late 2020. 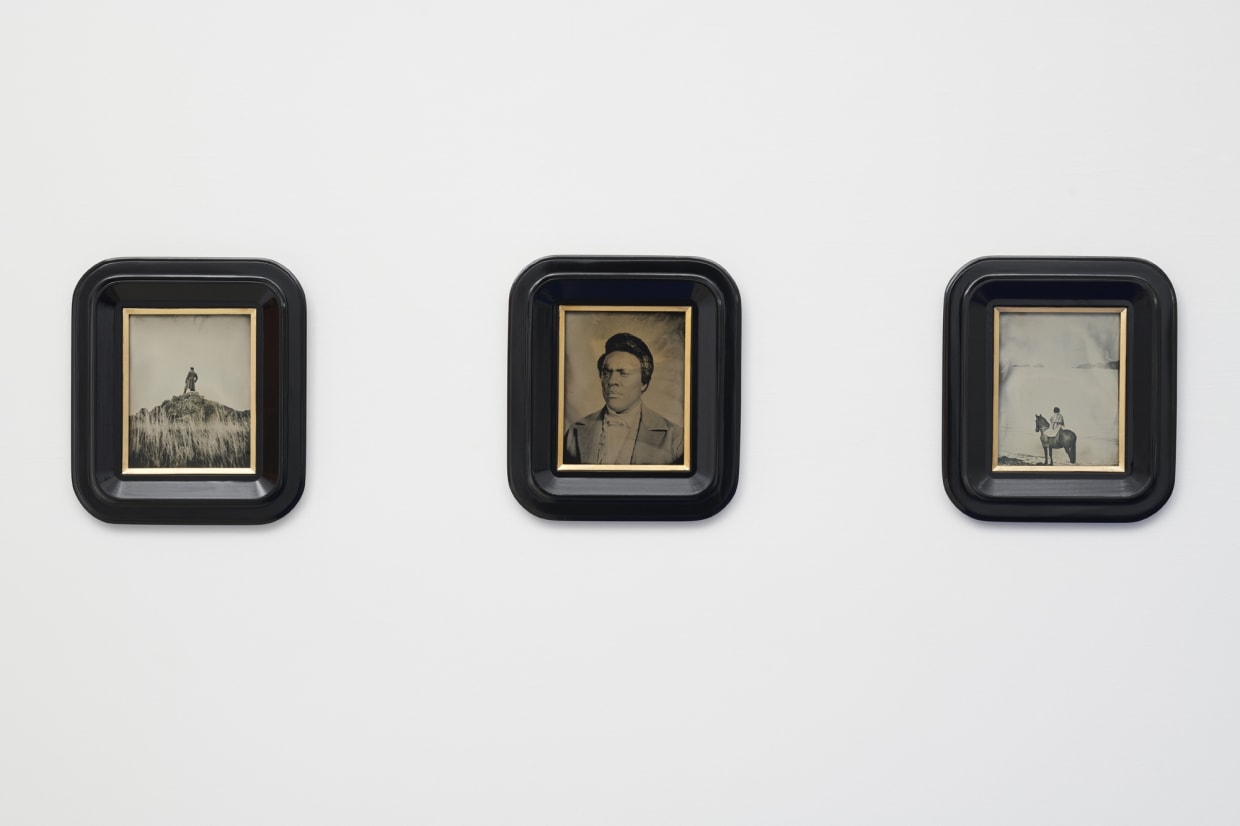 Isaac Julien, “Lessons of the Hour” (2019) —Excerpt
True North (2004) is a mediation on the sublimity of diaspora, loosely inspired by the story of the black American explorer, Matthew Henson, who went to the North Pole with Robert Peary and four Inuit and later wrote an account of his experience. In this body of work, black faces are set against white snow in the midst of a vast landscape and an endless journey. The trek is both existential, universally human as well as political and community-specific. Sisyphus, who can never escape Hades, meets the slave, who has a chance of fleeing the South. Or the Book of Job meets Booker T. Washington's Up from Slavery (1901). In many cases, the role of the intrepid explorer is occupied by an Amazonian beauty or noble warrior, a gender shift that begs many questions. 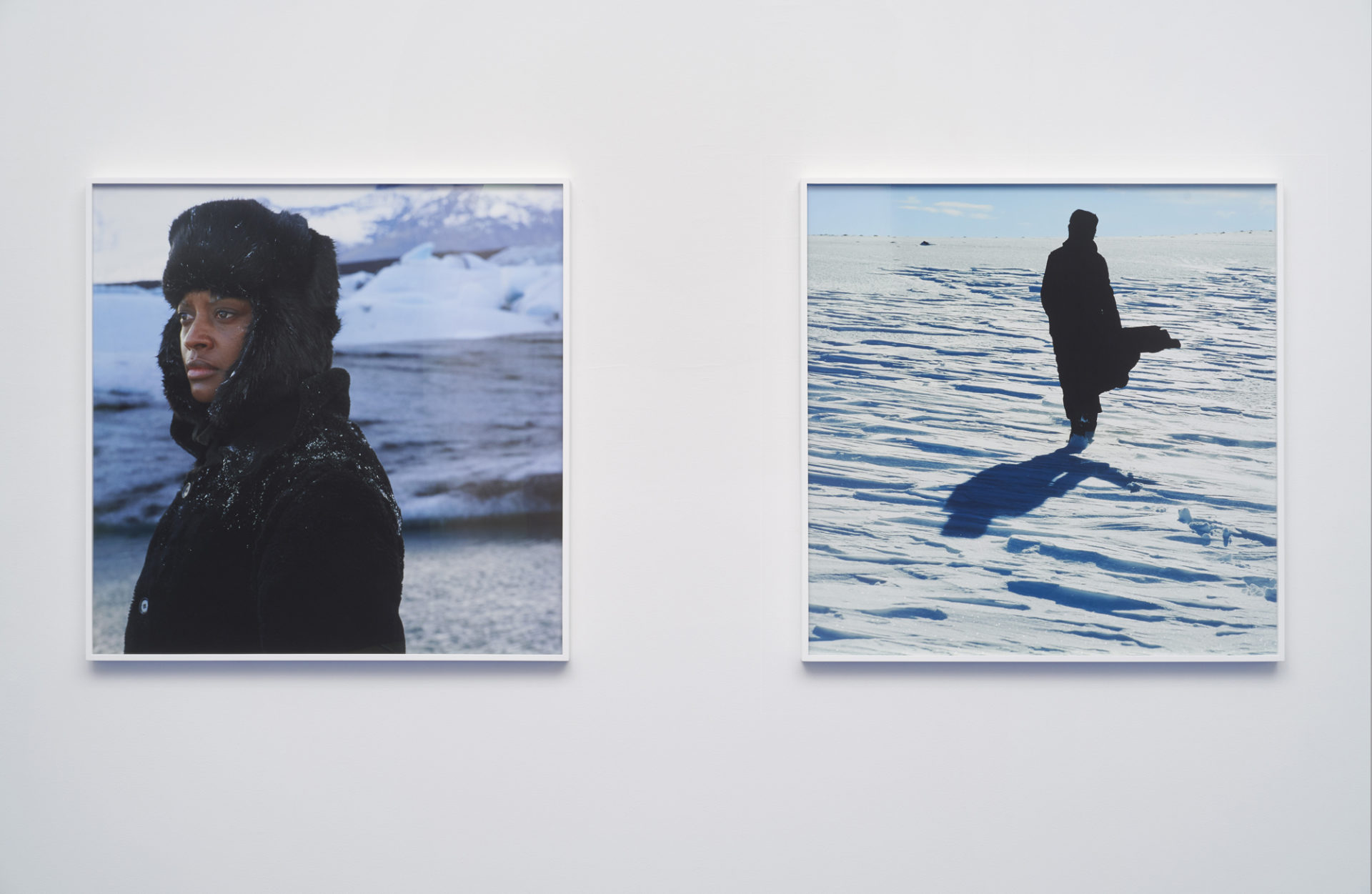 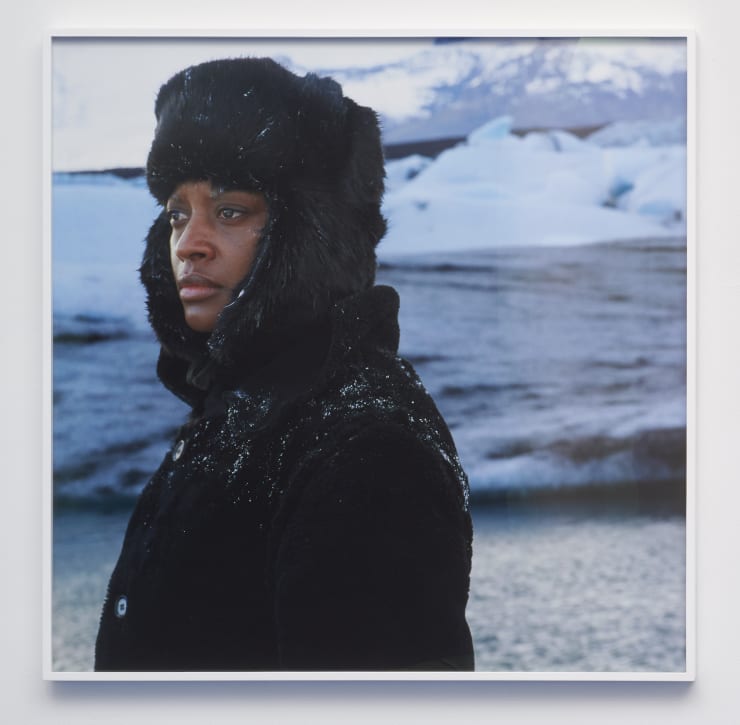 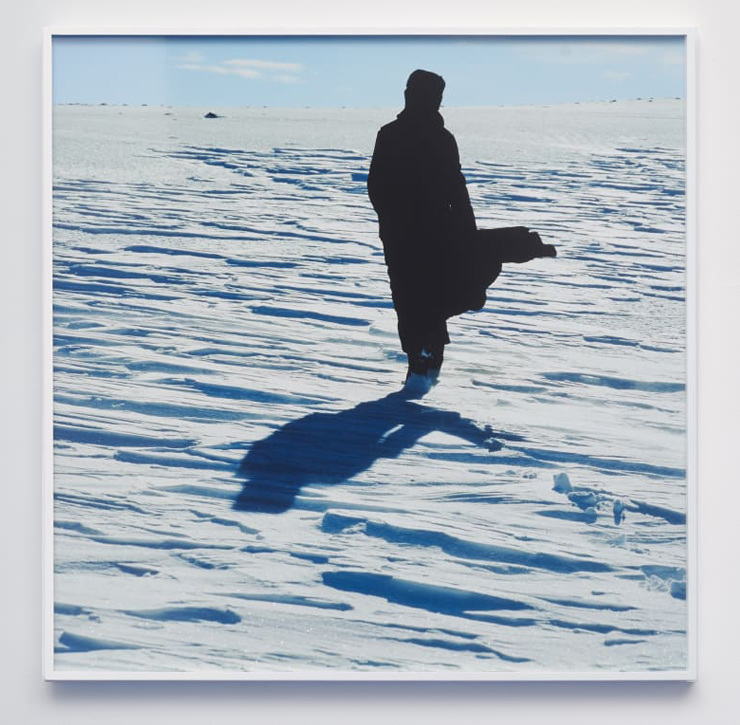 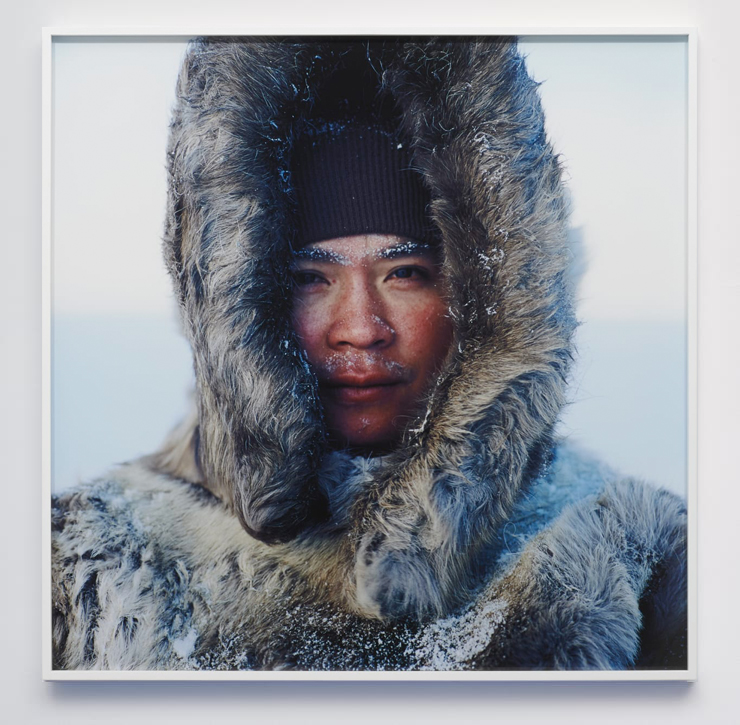 Isaac Julien
True North Series, 2004
Framed archival pigment print on Epson Premium Photo Glossy 250gsm paper mounted on aluminum
40 1/2 x 40 1/2 inches / 103 x 103 cm
Edition of 6 + 2 AP
£ 15,000
INQUIRE
True North Series, 2004
Isaac Julien, “True North” (2004) —Excerpt
Conversation between Isaac Julien & Sarah Thornton on “Baltimore” and “True North” series
Julien’s Baltimore (2003) was shot outside in the city’s streets and inside three of its museums – the National Great Blacks in Wax Museum, the Peabody Library and the Walters Art Museum. These works pay homage to the style, language and iconography of 1970s Blaxploitation films (particularly Melvin Van Peebles’ 1971 classic, Sweet Sweetback’s Badassss Song) and offer surreal allegories of race, class and cultural history. The project bears witness to Julien’s desire to “put the future, the past, and the present in the same time frame” and to see beauty in Afrocentric culture. One of the Baltimore photographs features a waxwork of Ida B. Wells, a journalist and black suffragette who led an anti-lynching crusade in the 1890s, which has been transported two miles from the Great Blacks in Wax Museum to one of the Baroque rooms of the Walters Art Museum. Julien creates an amusingly unconventional image wherein the viewer looks over the shoulder of Ida, whose gaze is directed at a painting of the naked white torso of Saint Paul the Hermit. 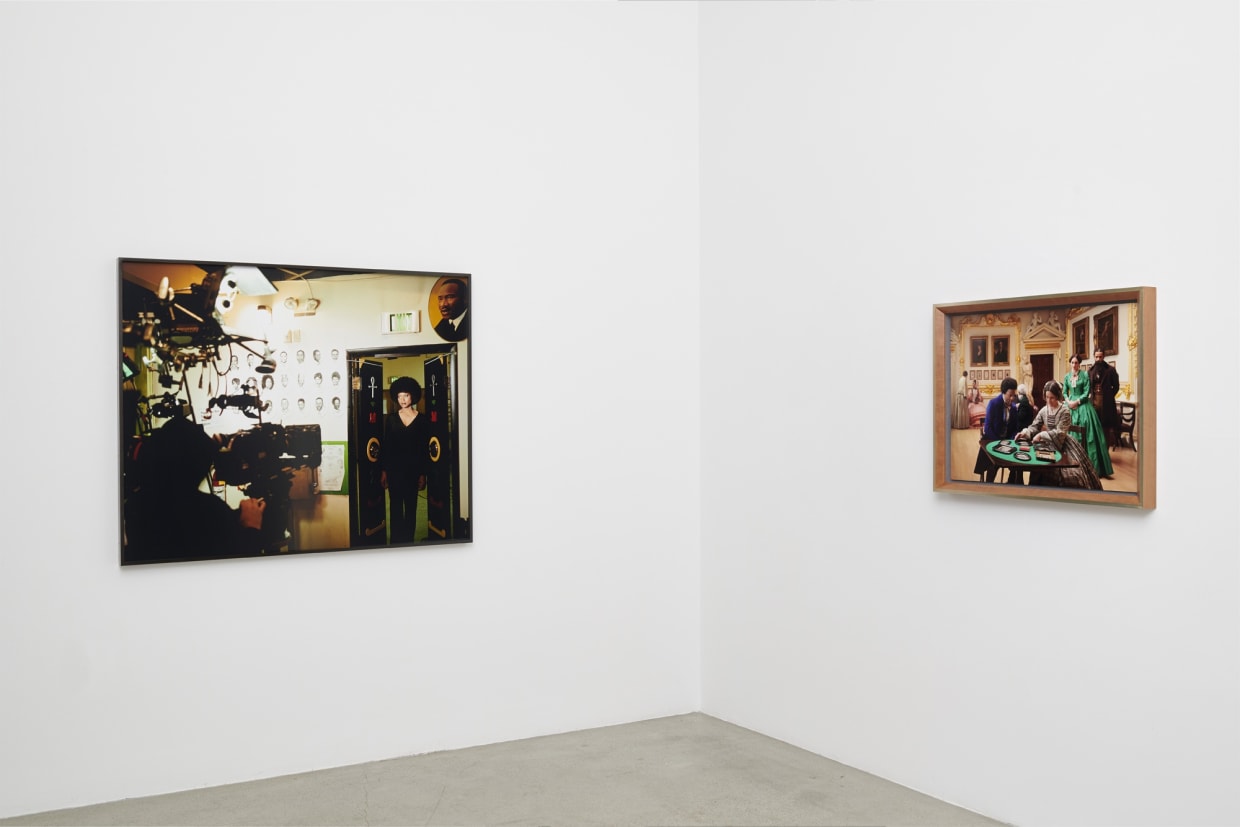 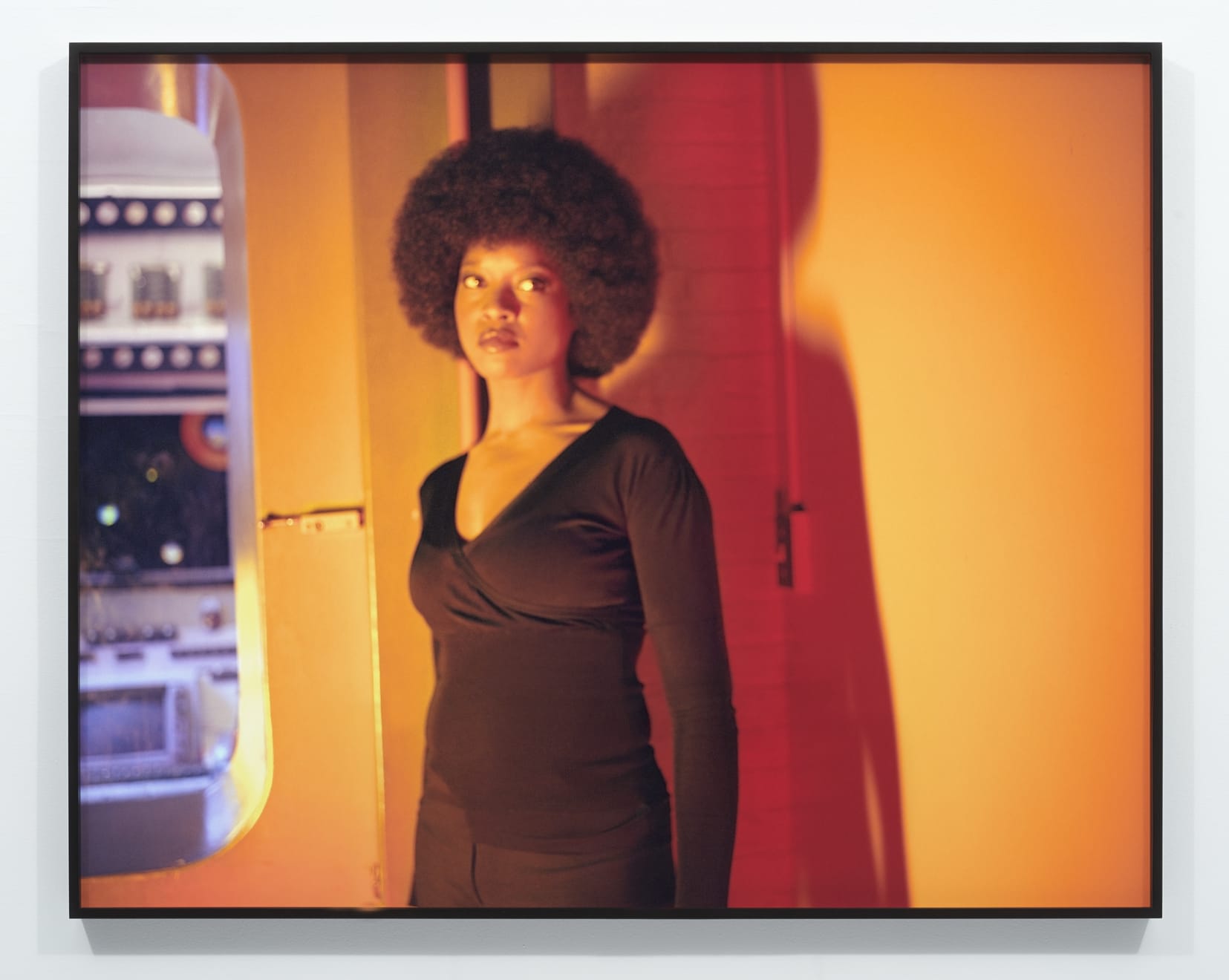 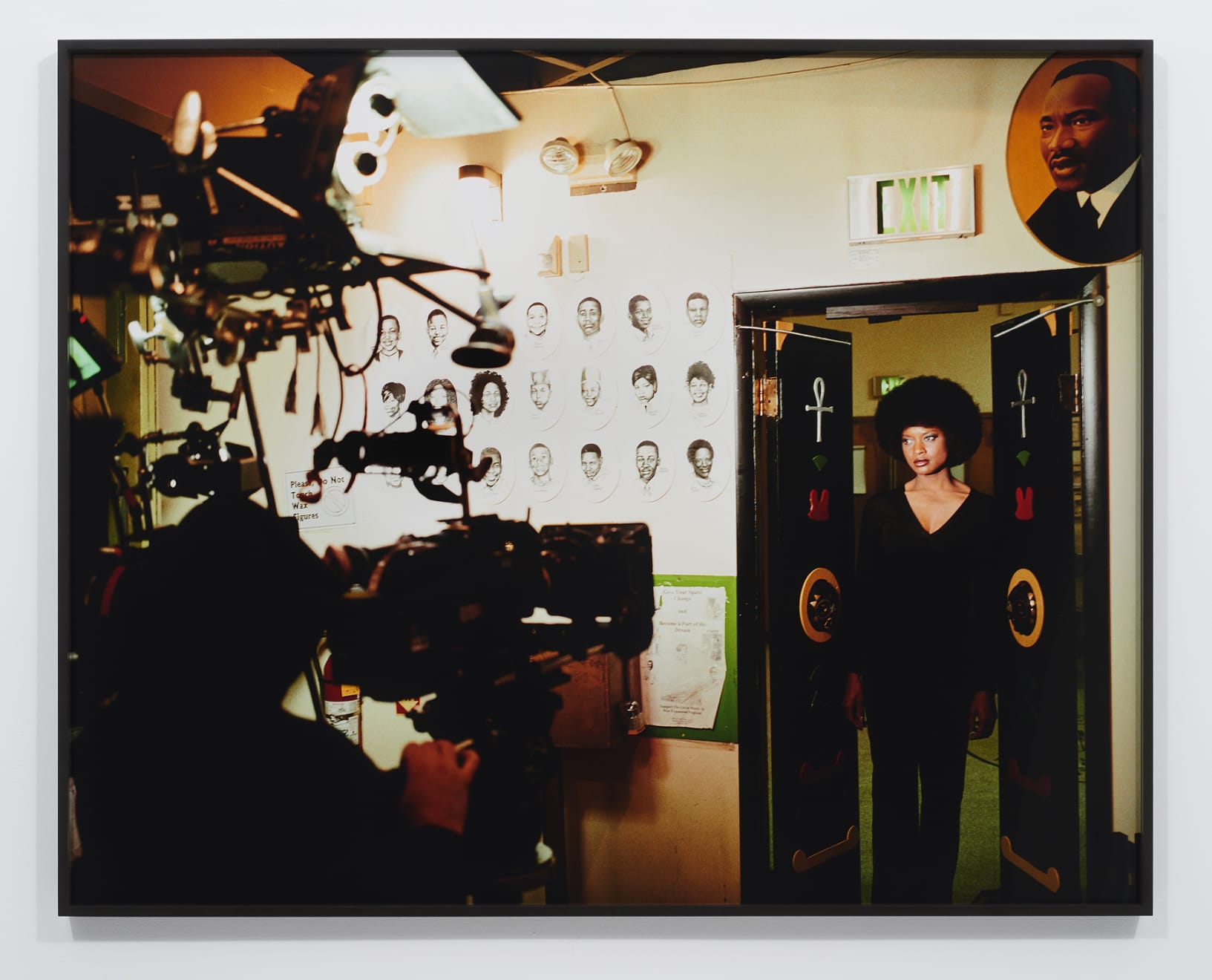 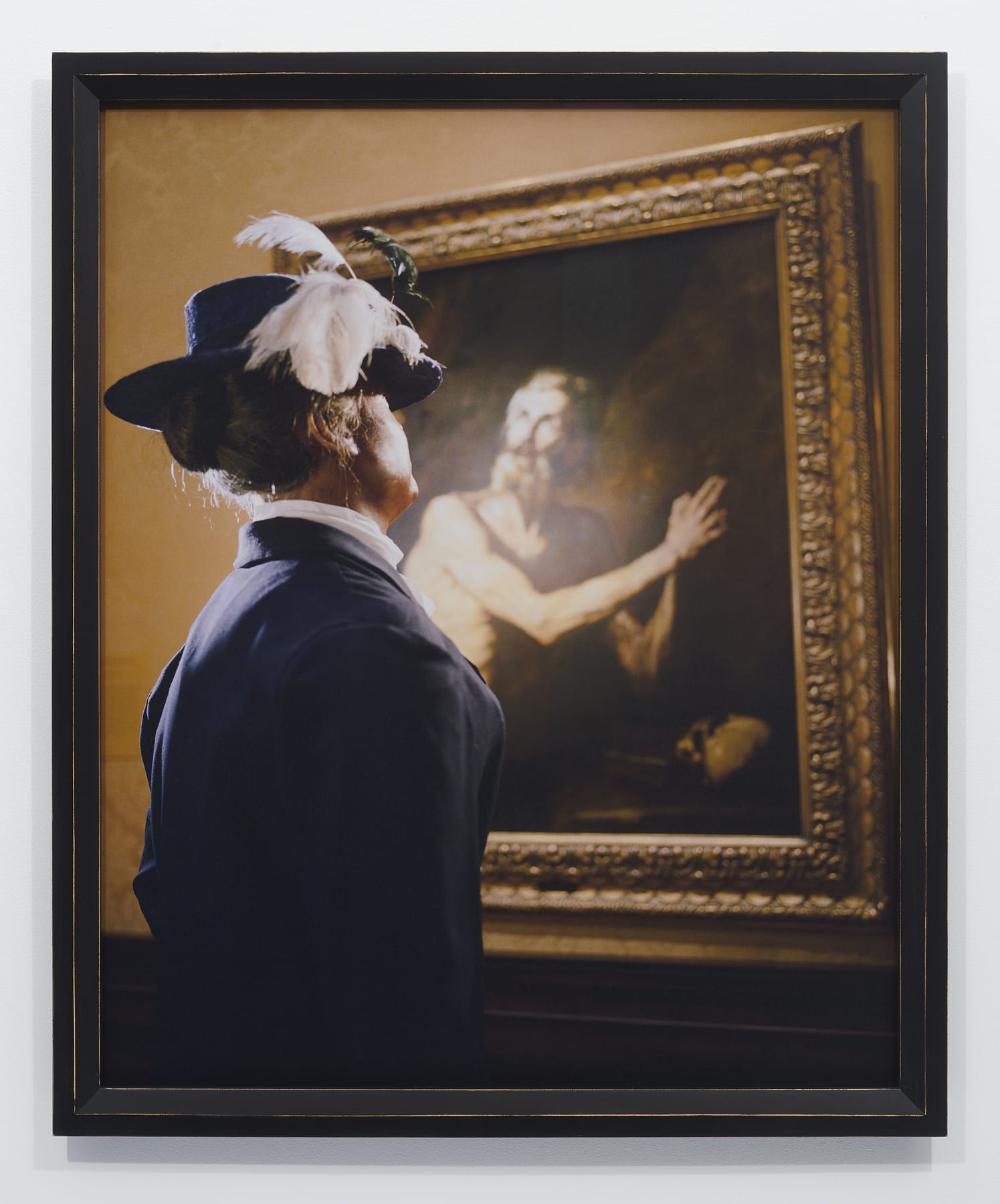