Jessica Silverman is pleased to present “Human Geometries,” an exhibition of works created by Judy Chicago between 1965 and the present. The show features both monumental pieces and potent gems that explore gendered aesthetics, human rights and social justice. Coinciding with the artist’s first major retrospective at the de Young Museum, this exhibition opens Saturday, August 28th.

The centerpiece of the exhibition is Sunset Squares, a landmark in Feminist Minimalist sculpture, which consists of four structures in different sizes and subtle shades – pale pink, baby blue, lavender and mint. Framing and commenting on its surroundings, this quad of quads can be arranged and rearranged for maximum impact and interaction. Its freedom of movement, combined with its poly-chroma, challenges the rigid, dictatorial norms of much minimalist art. Conceived and created in 1965, but destroyed in the seventies, this outdoor rendition of Sunset Squares is made to original specifications in painted stainless steel. 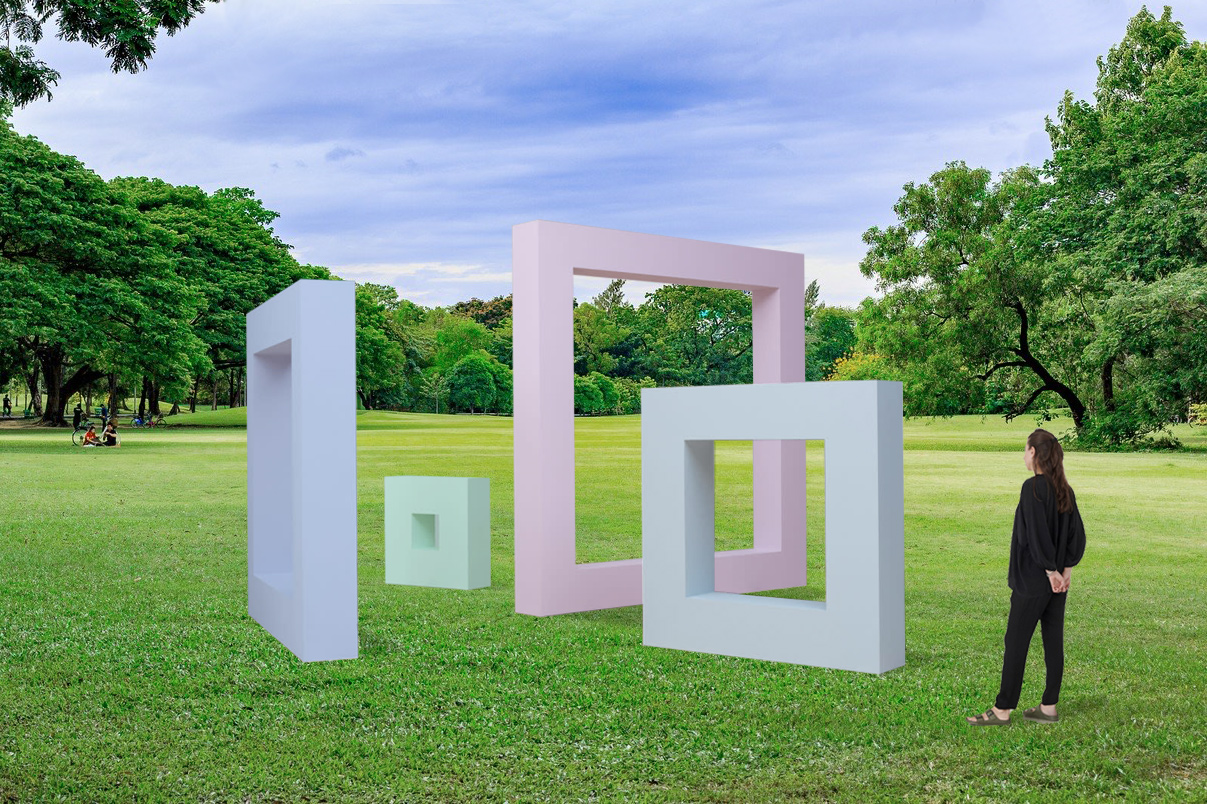 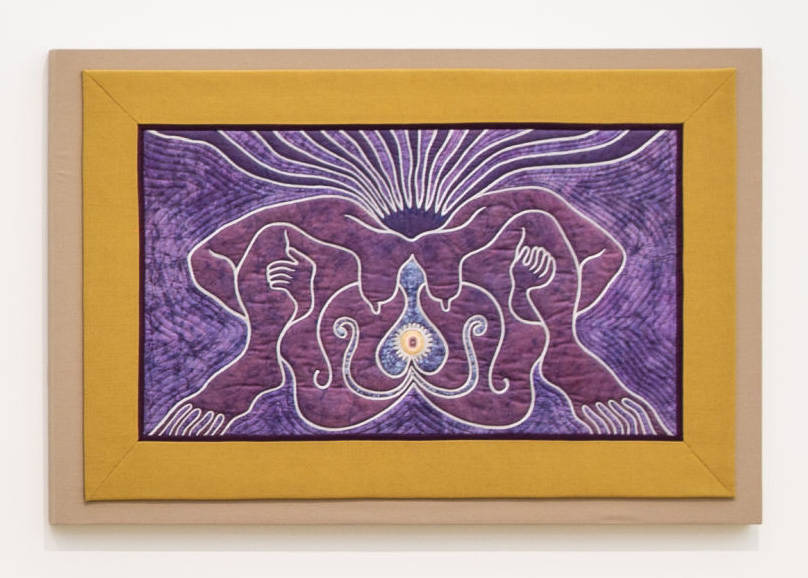 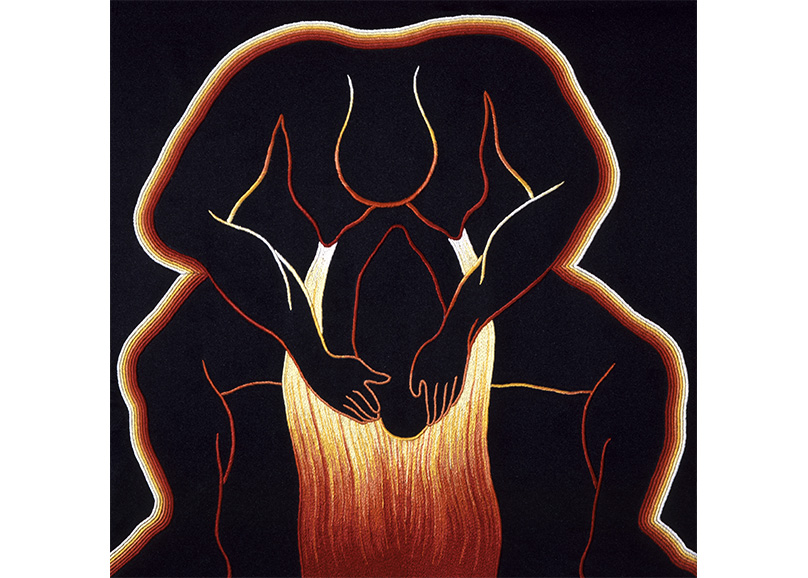 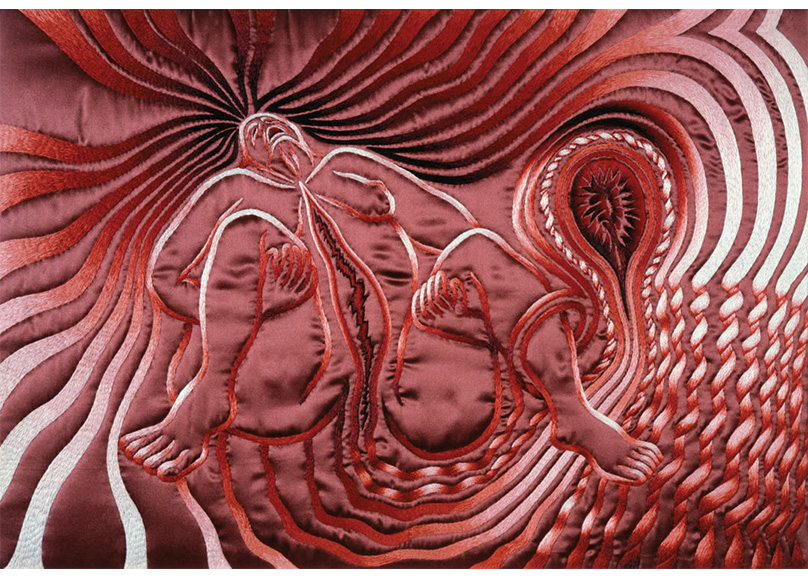 Judy Chicago
Autobiography of a Year, 1993-1994
Mixed media on Magnani paper
140 drawings, each: 11 x 15 inches / 27.9 x 38.1 cm
Installed size: 80 x 448 inches / 203.2 x 1137.9 cm
INQUIRE
Although Chicago is best-known for elevating and recognizing the lives of others (e.g. The Dinner Party, 1979), she has created a series of 140 raw, extempore drawings in watercolor and pencil on paper, laying out her innermost aspirations and insecurities. The unexpected intimacy of Autobiography of a Year (1993-94) invites empathy as the artist’s struggle for self-worth and self-soothing is familiar to us all. 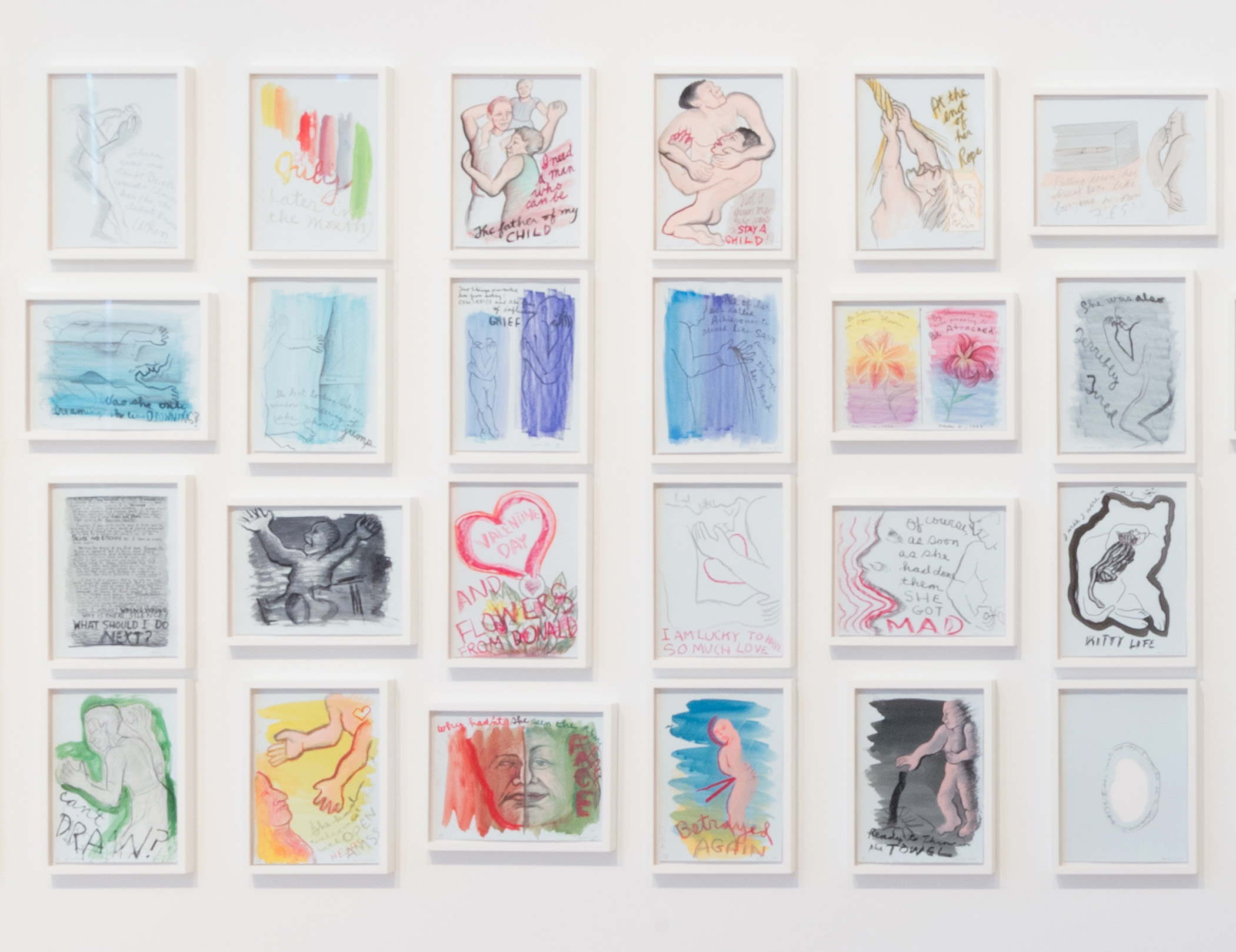 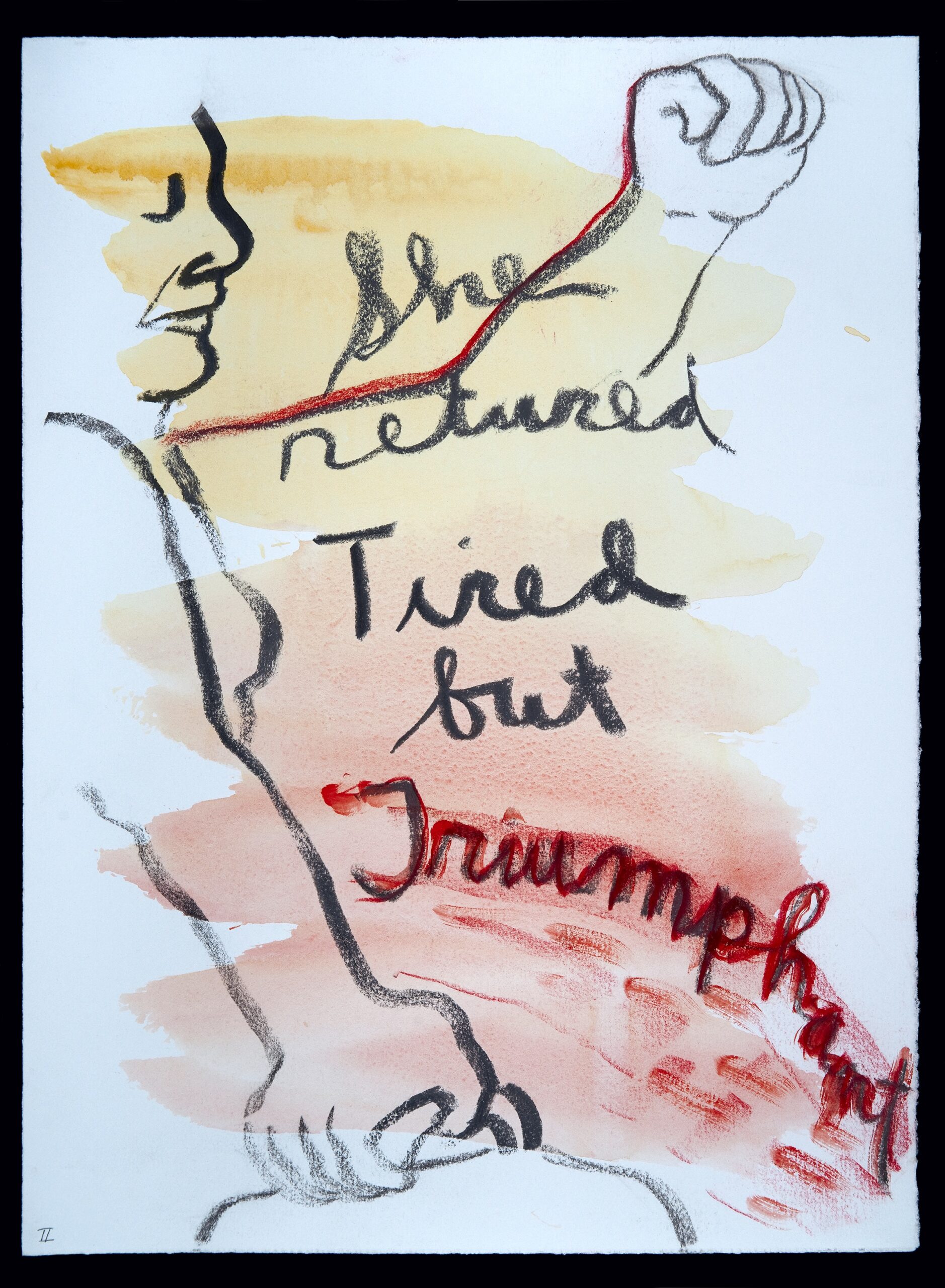 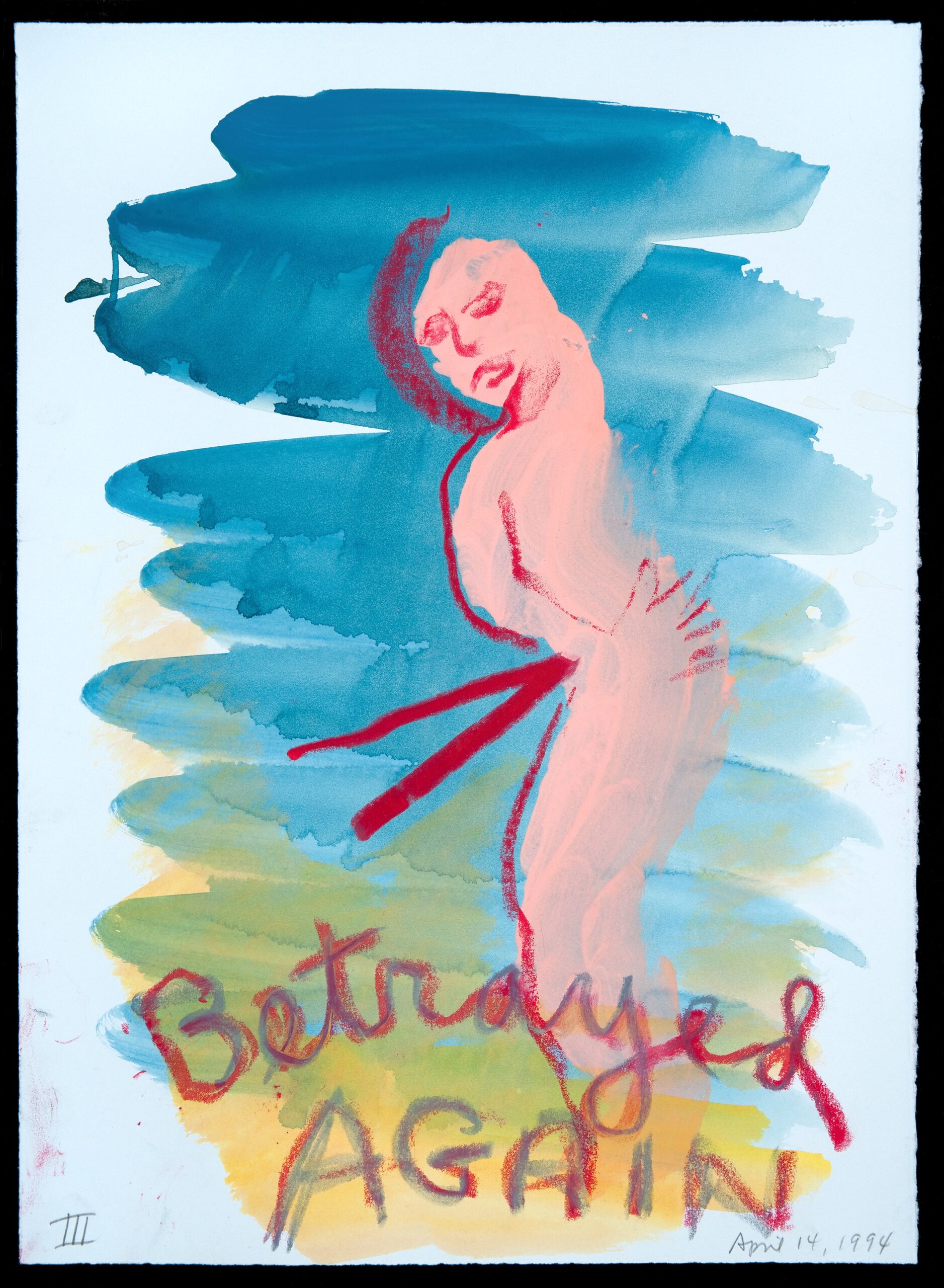 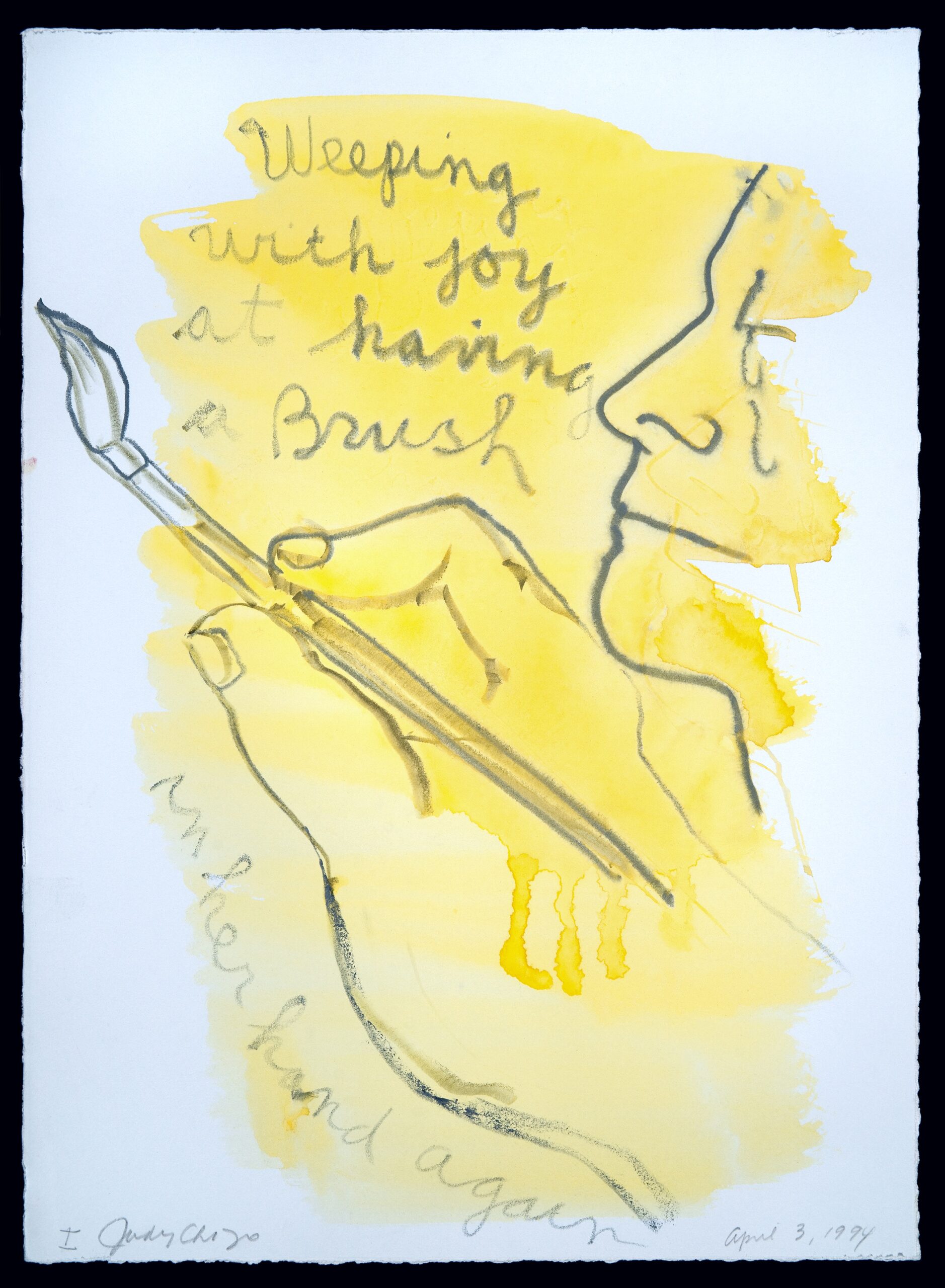 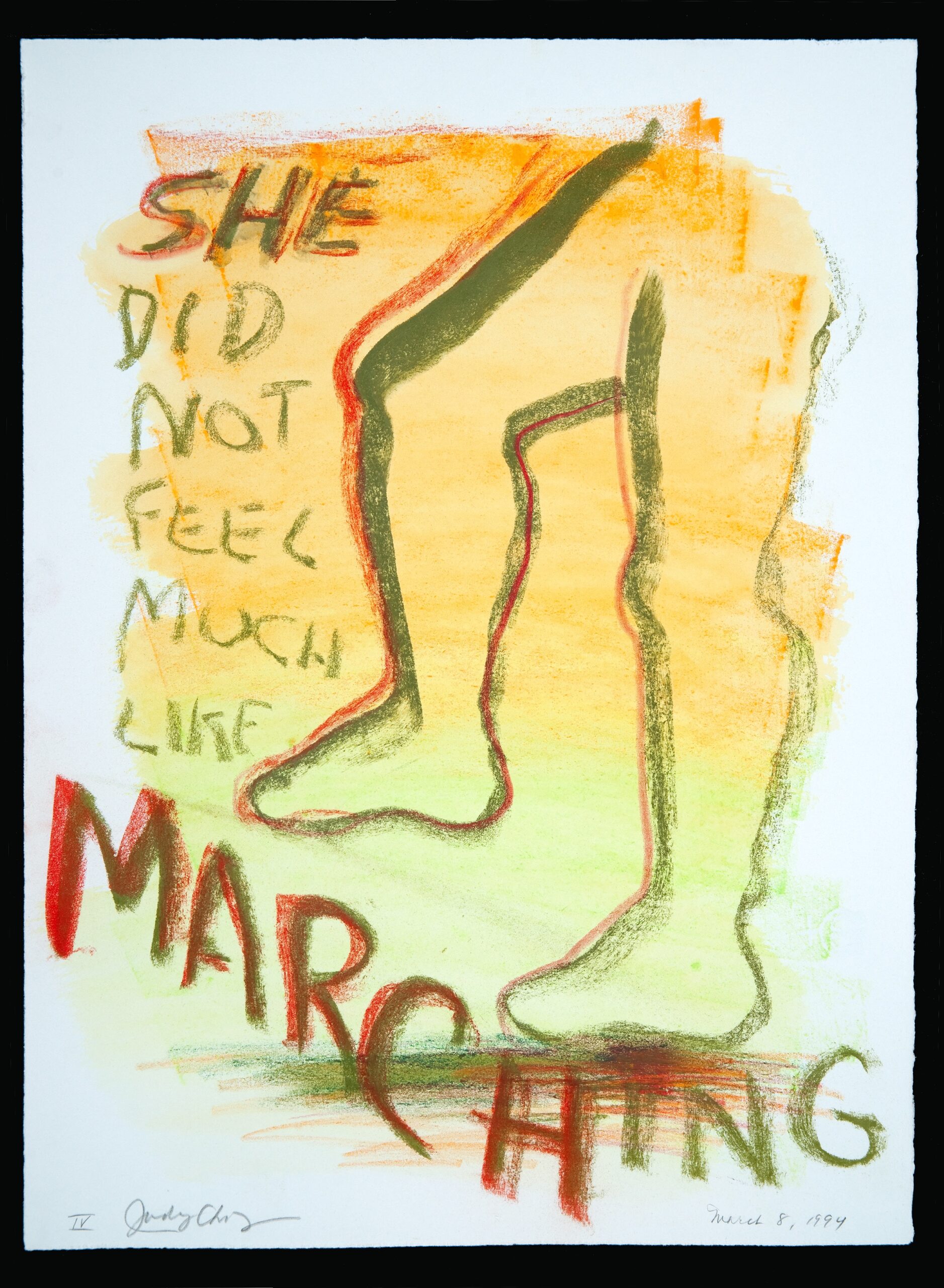 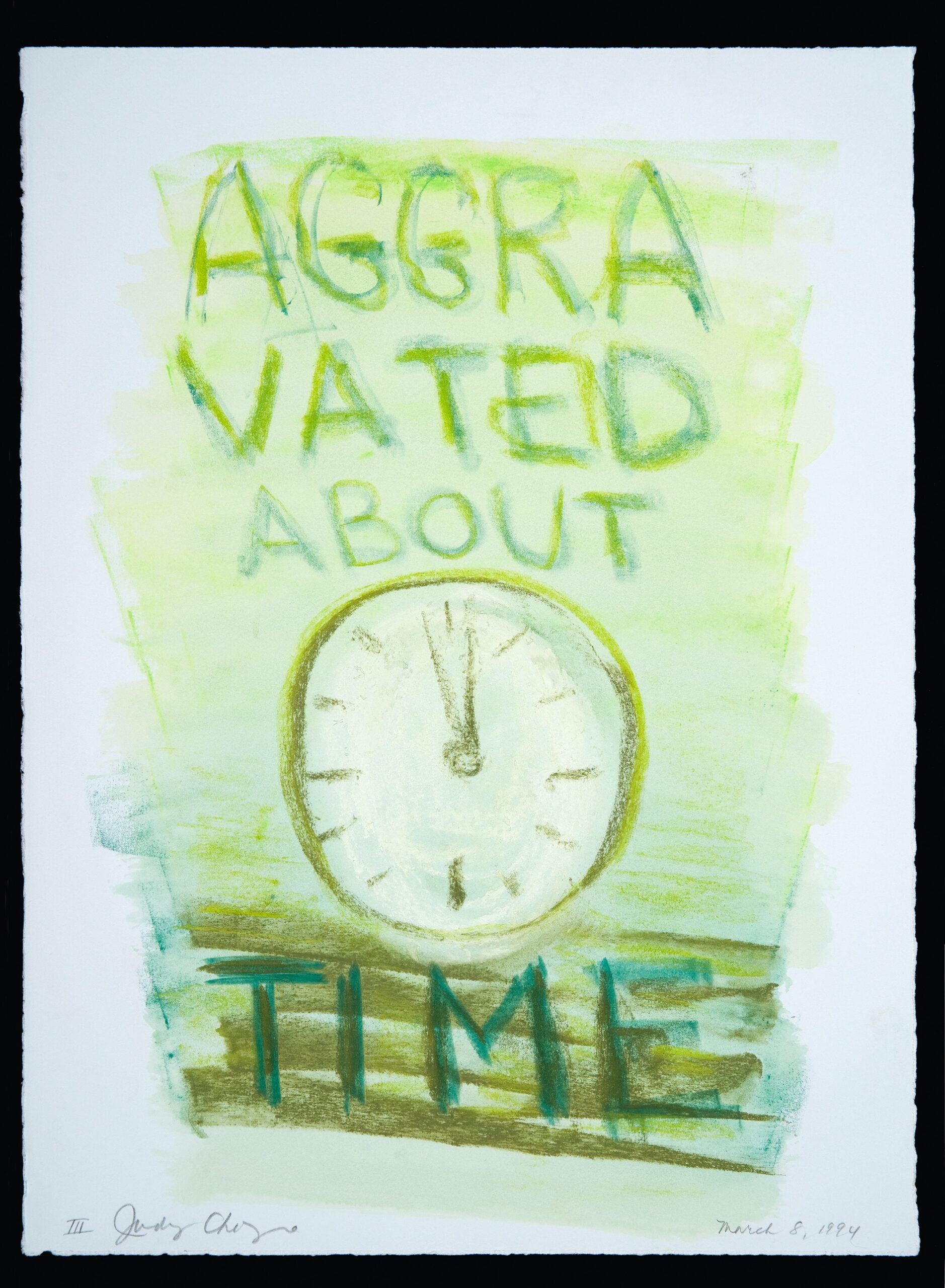 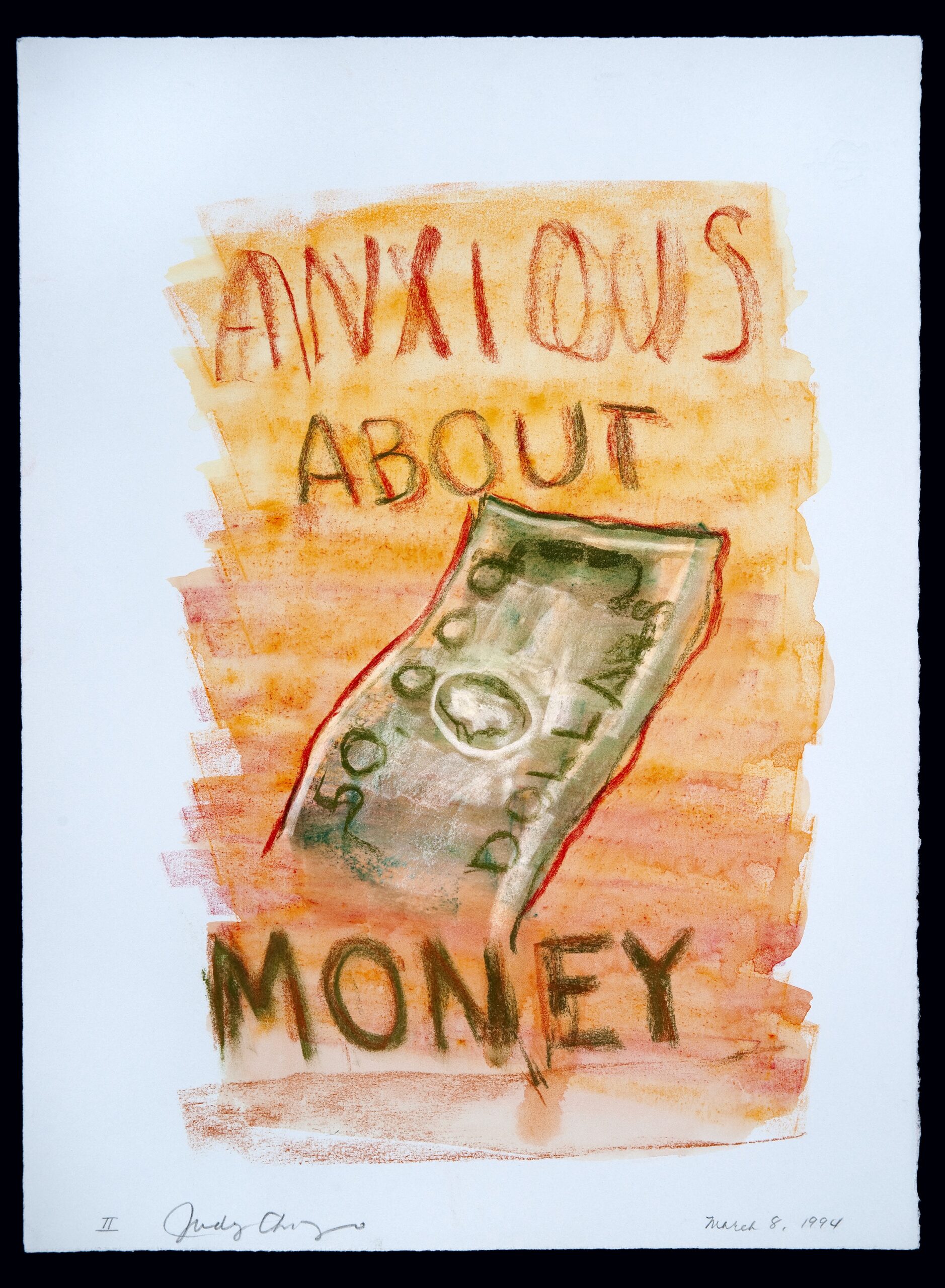 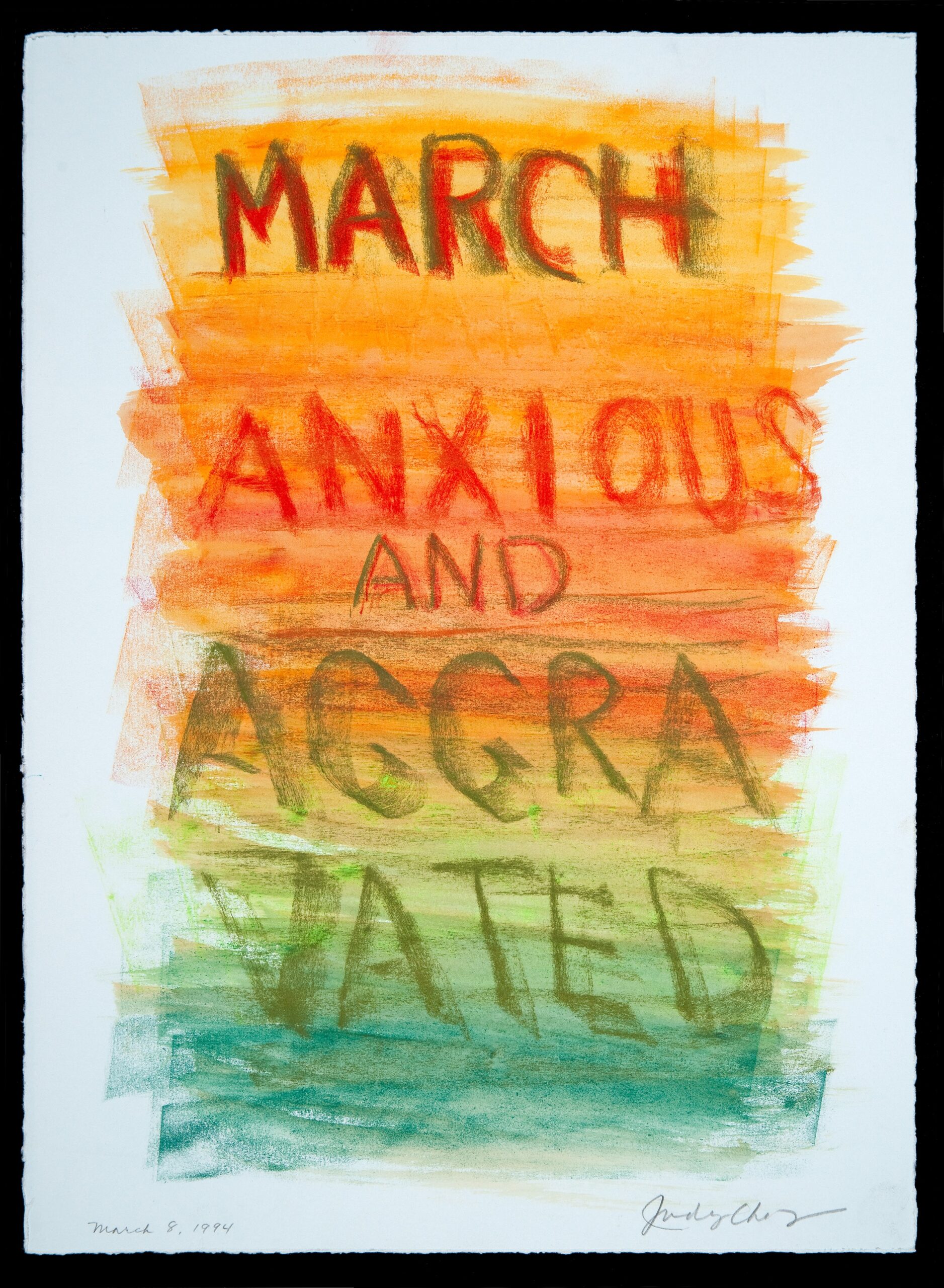 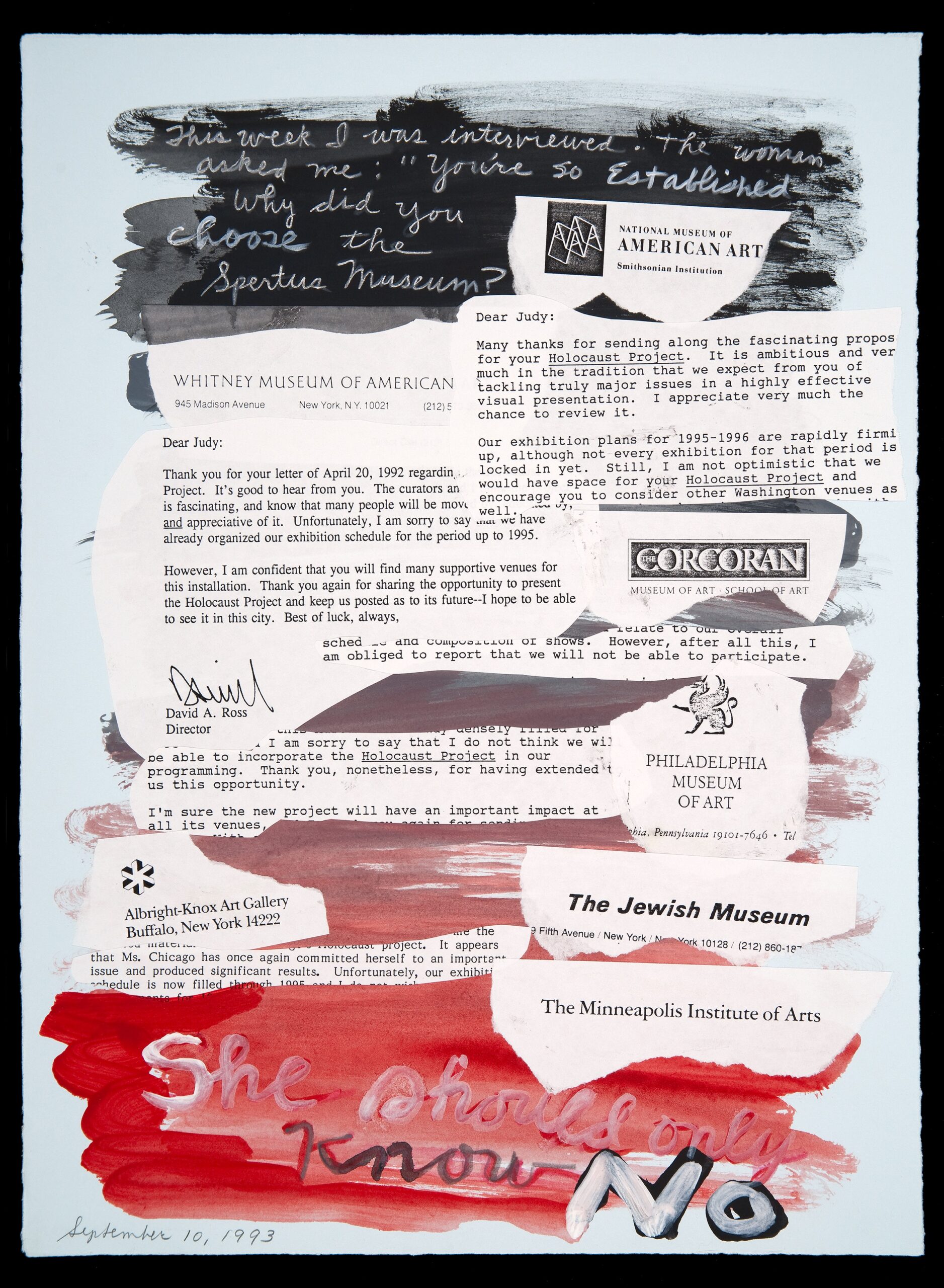 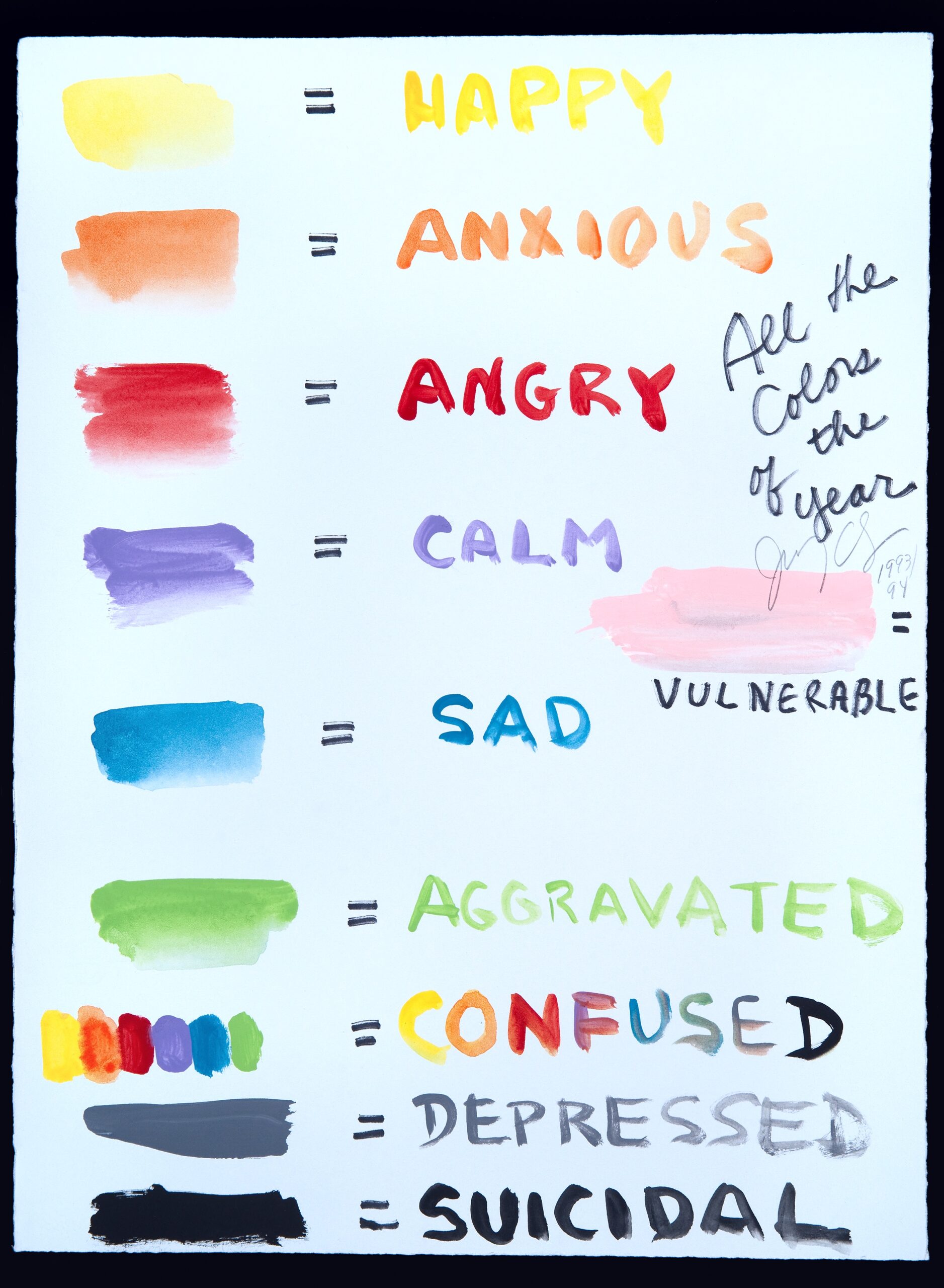 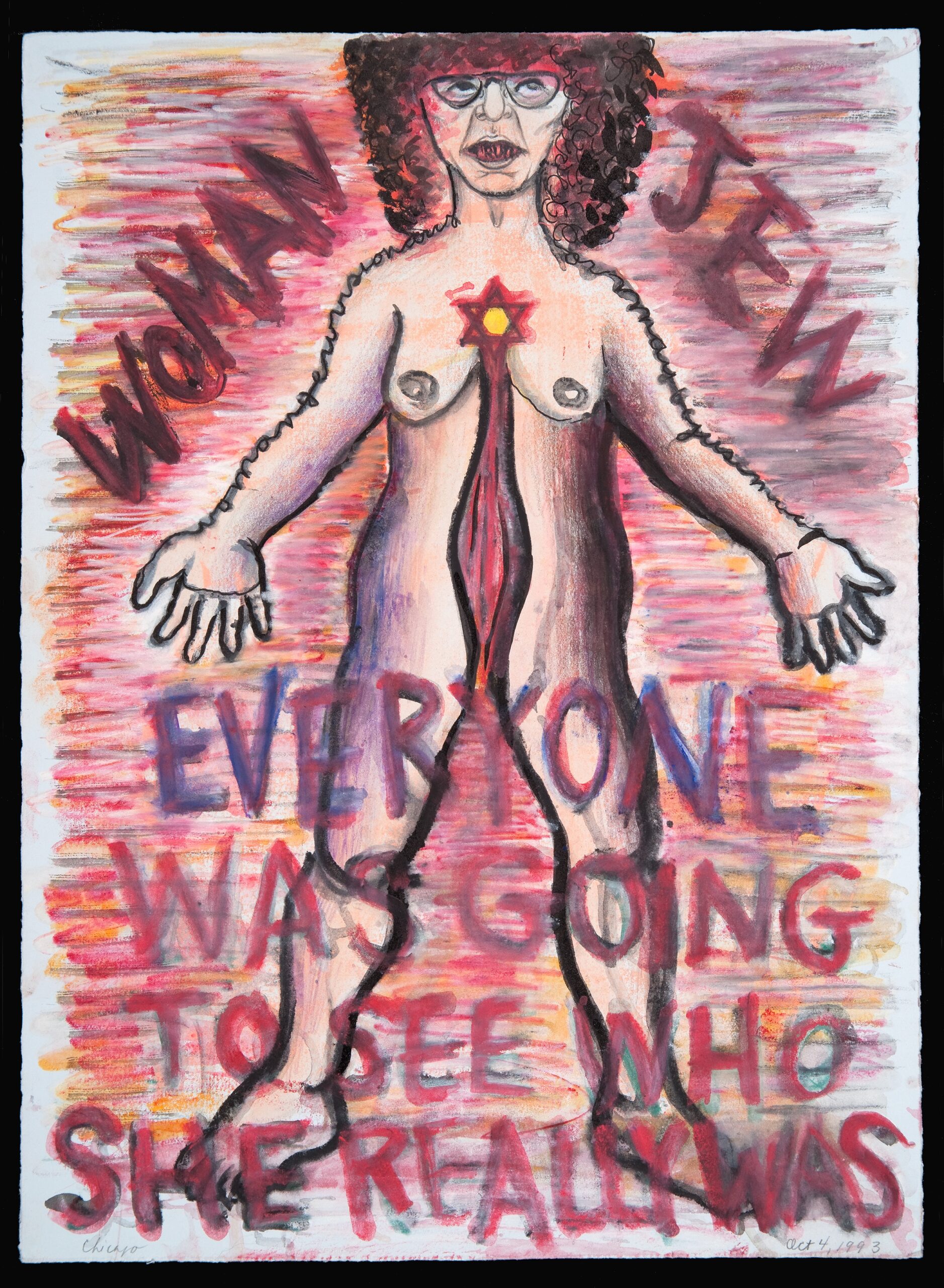 Triangles loom large in Chicago’s oeuvre, taking on different meanings in different decades. Logo (1994) takes the form of concentric triangles of stained glass not only to honor Holocaust victims, but to create an icon of community survival. Here color represents the demographics targeted by the Nazis: yellow for Jews, pink for homosexuals, black for “anti-socials,” blue for immigrants, red for political prisoners, brown for gypsies, and green for criminals. 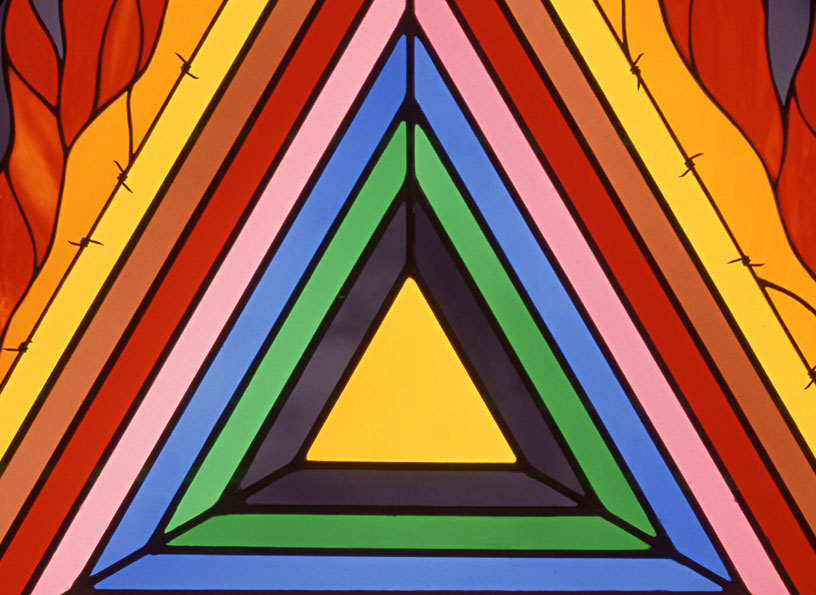 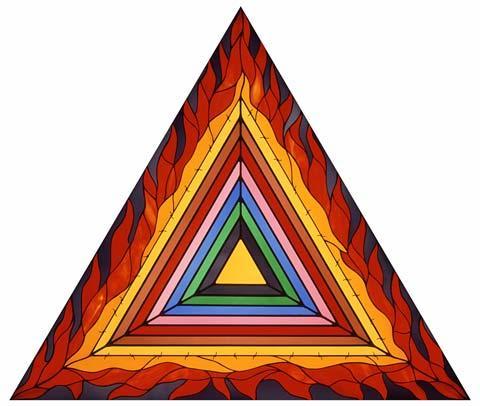 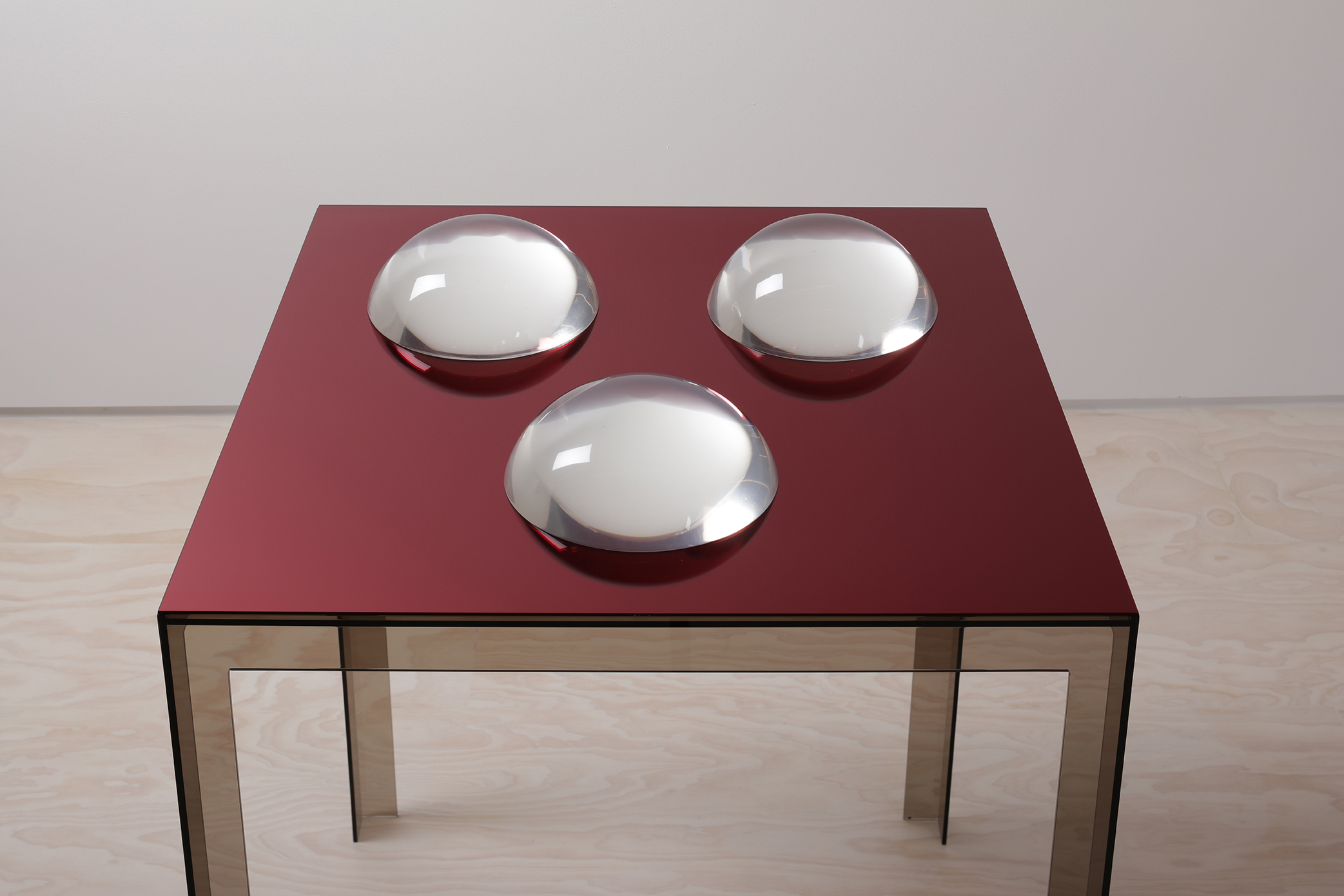 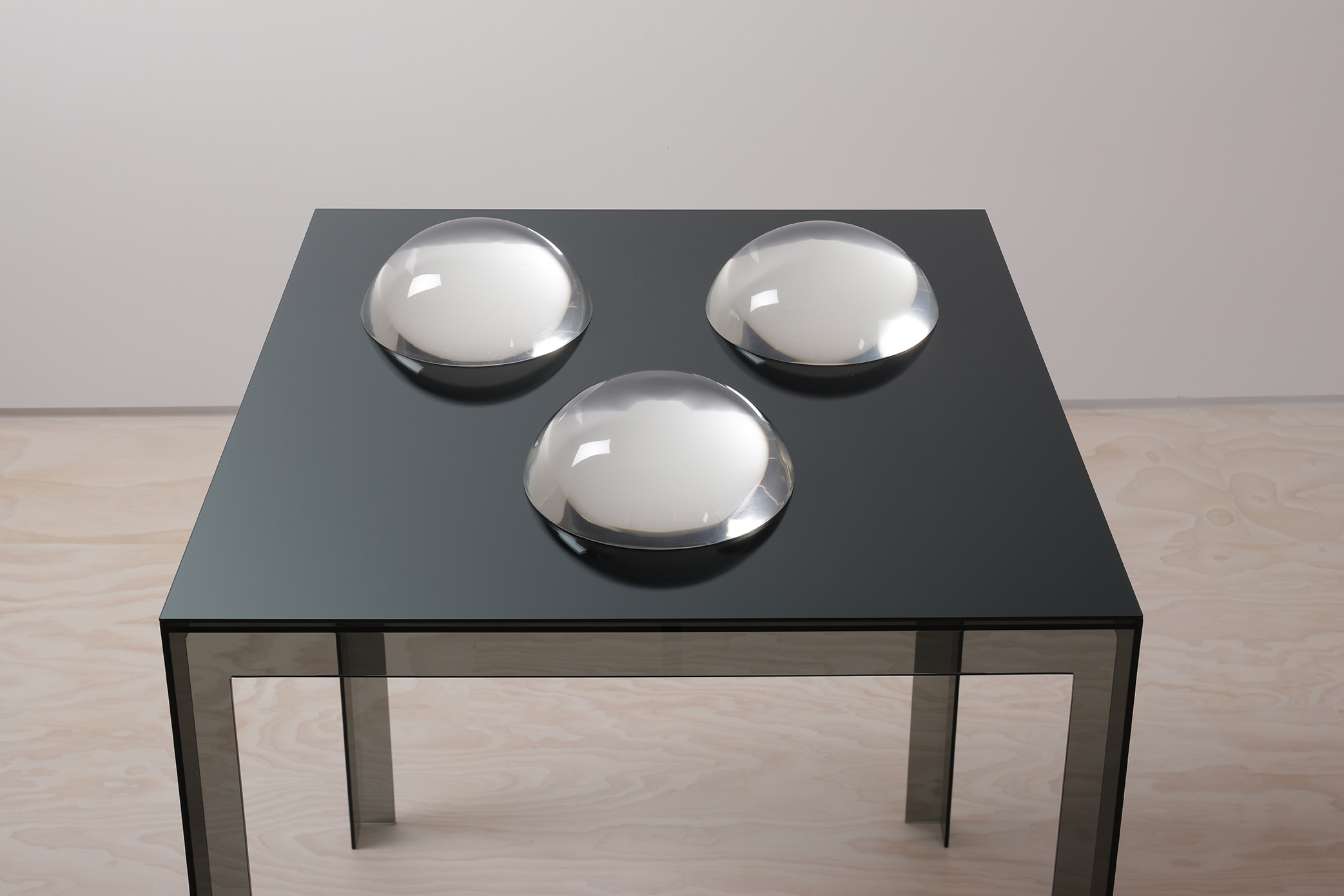 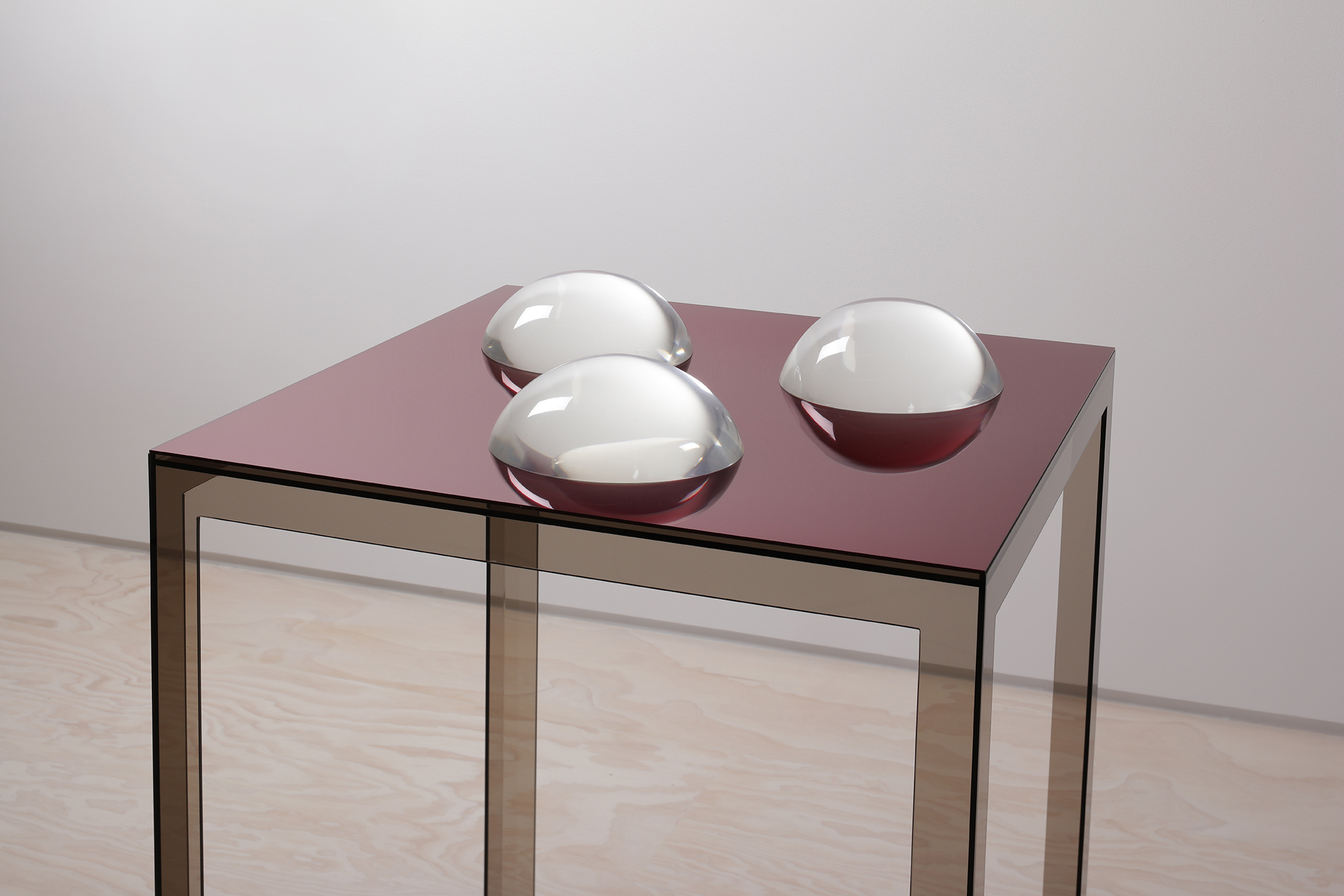 Judy Chicago
Cartoon for The Fall, 1987
Sprayed acrylic and oil on canvas
68 1/2 x 227 inches
173.99 x 576.58 cm
INQUIRE
Cartoon for the Fall (1987) is an ambitious history painting, exploring power and powerlessness, gender and Jewish identity in civilizations past and present. Chicago and her husband Donald Woodman worked for eight years, pondering the horrific depths of the Holocaust. In 2021, a time of resurgent white supremacism, fascism, and anti-democratic dictatorships, their project is ever more relevant. The 18-foot-long canvas is meant to remind us of the necessity to work towards a more humane, peaceful and equitable world. 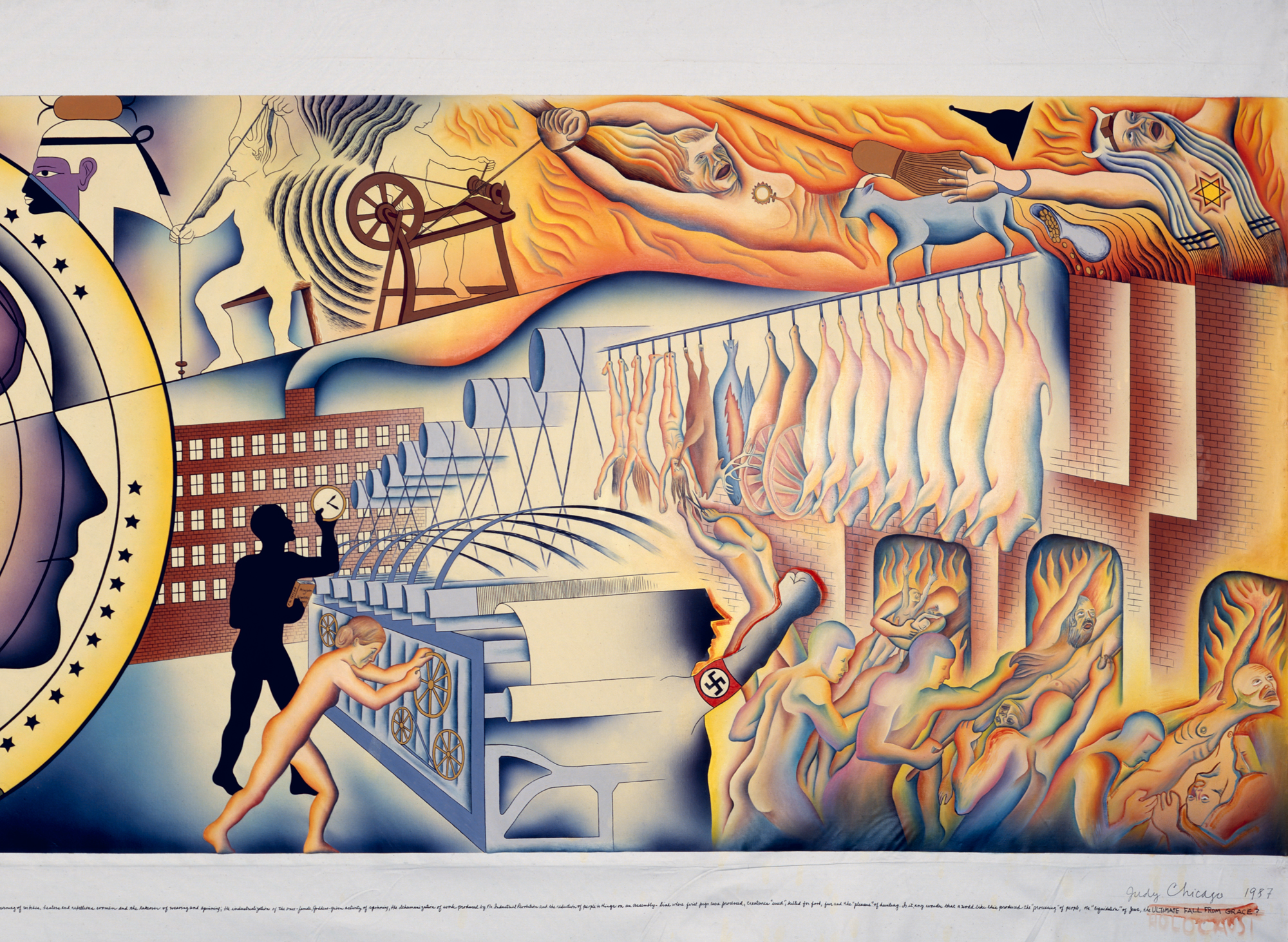 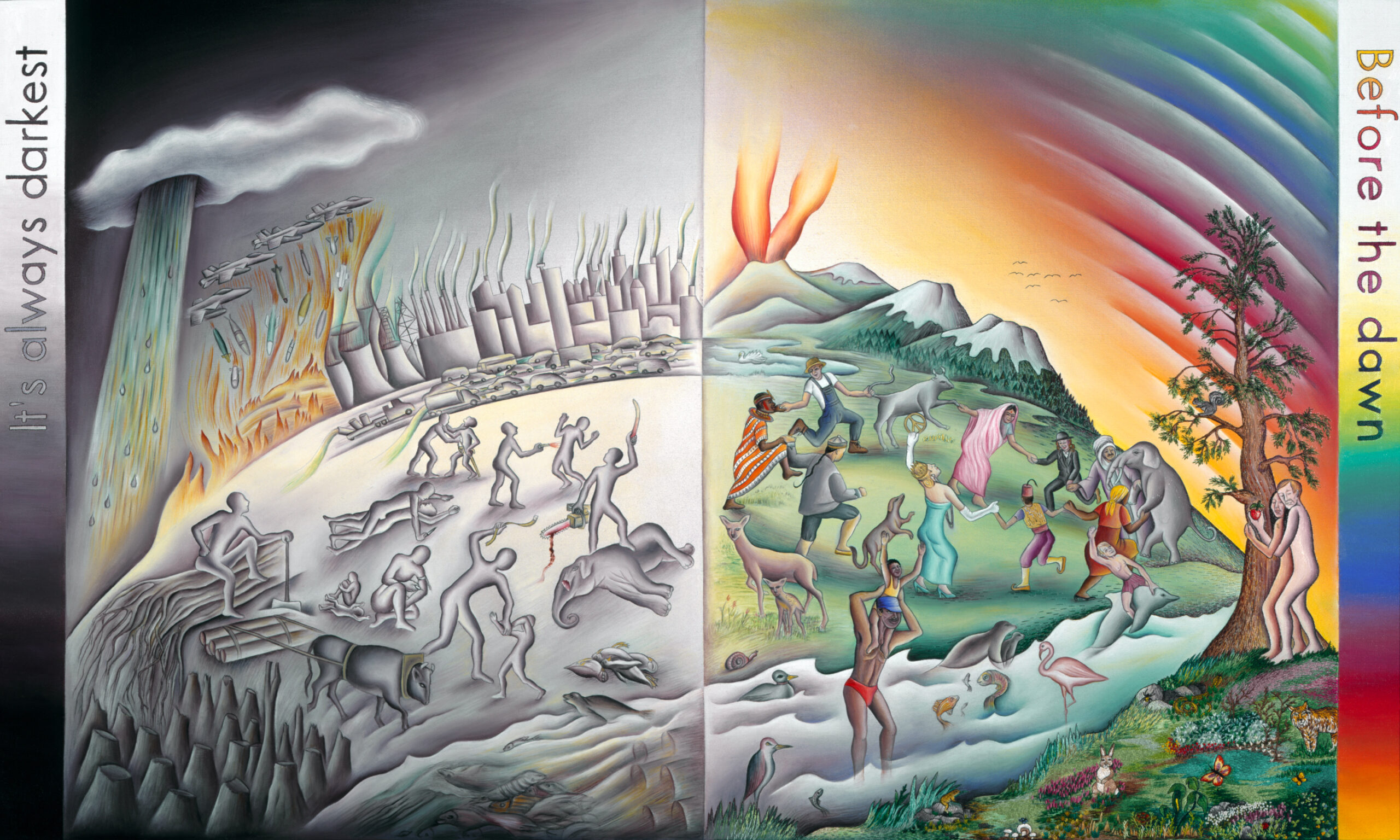 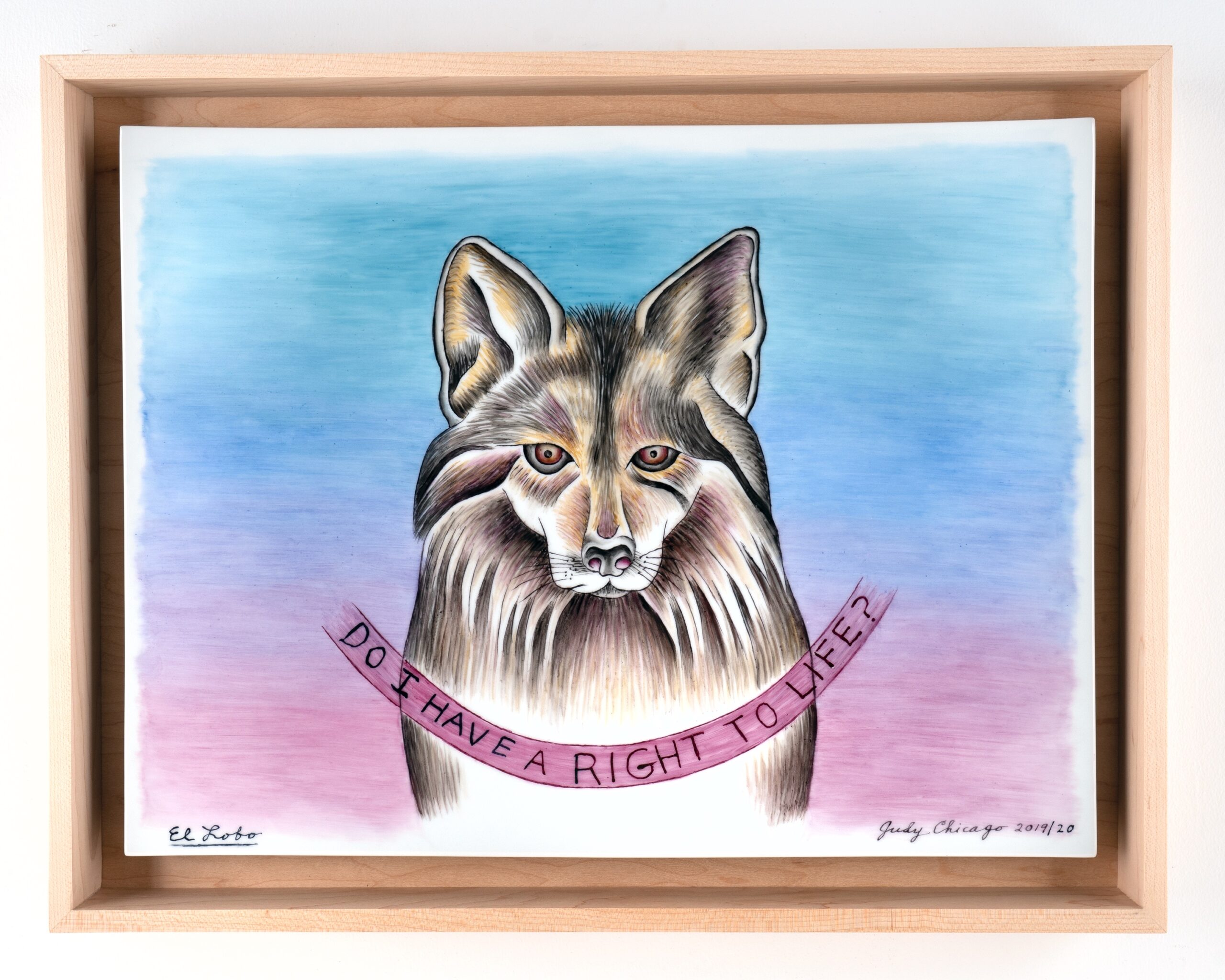 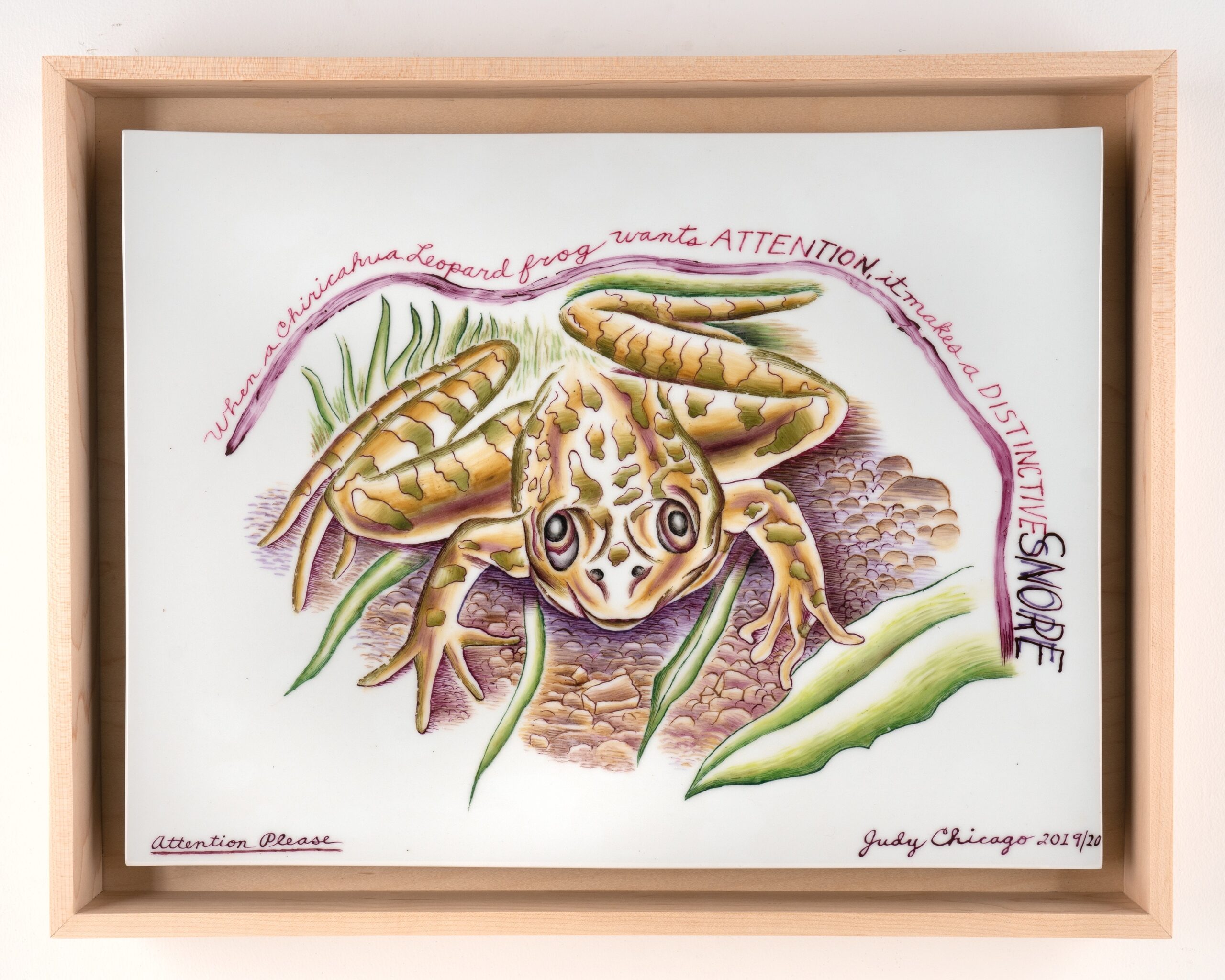 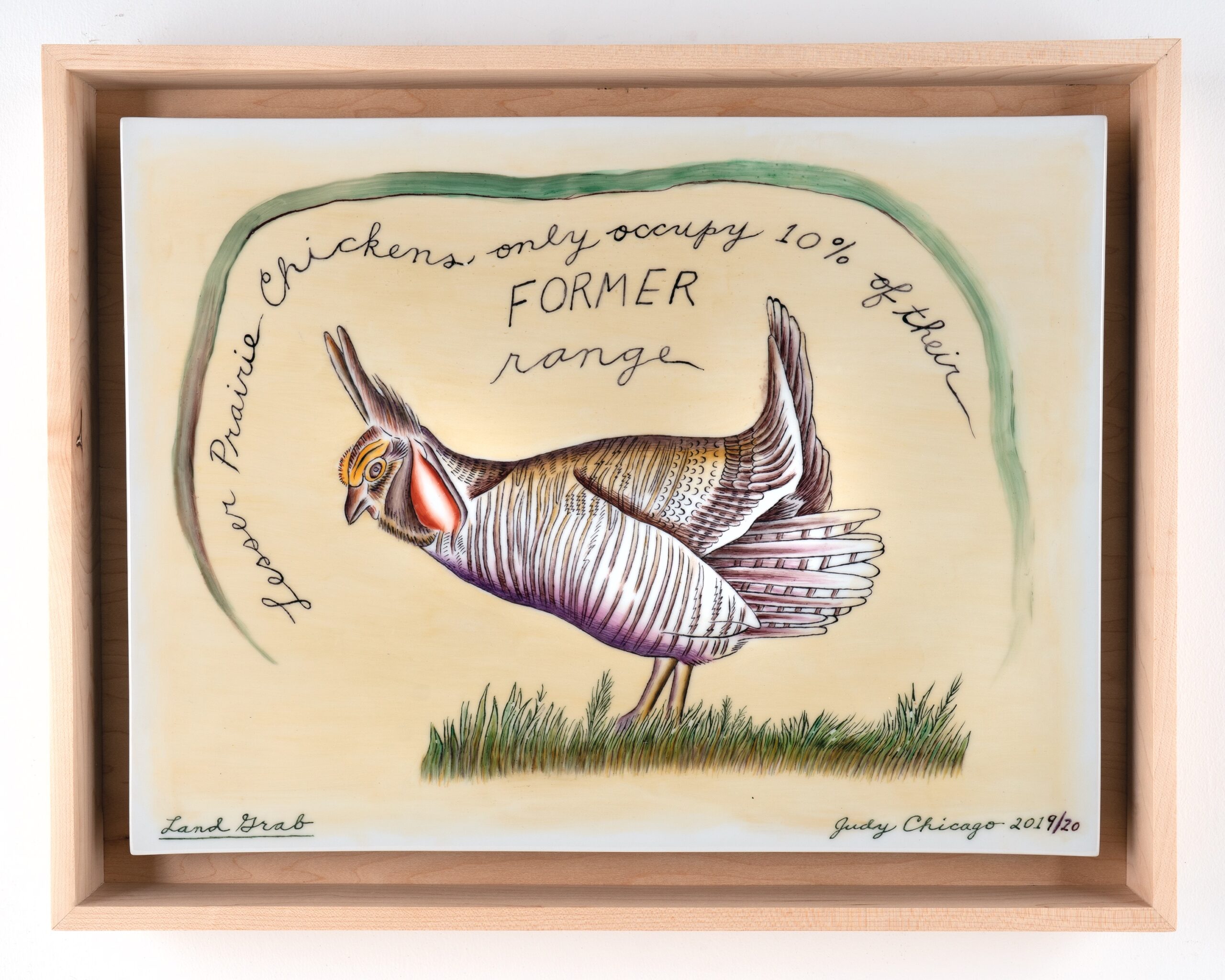 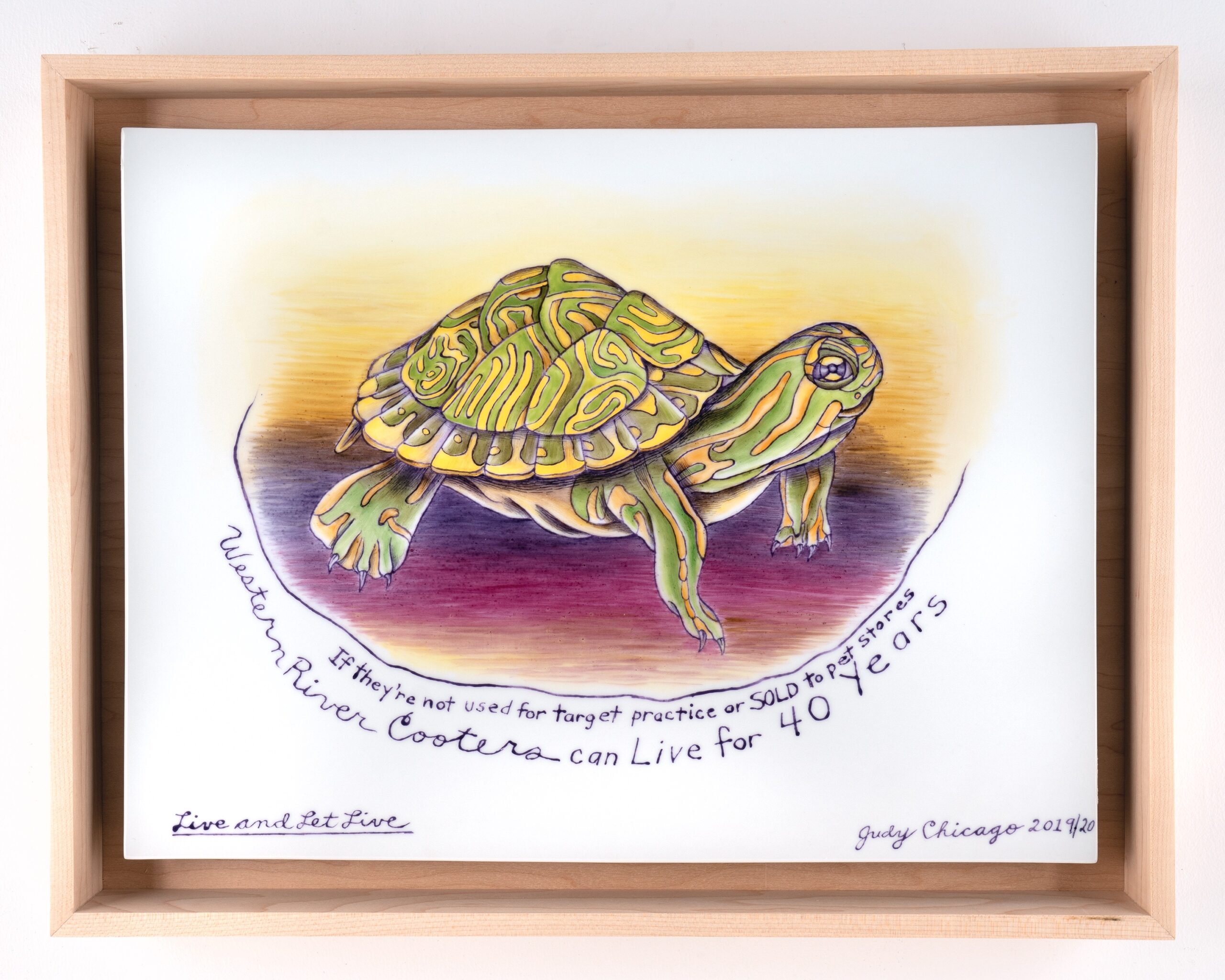 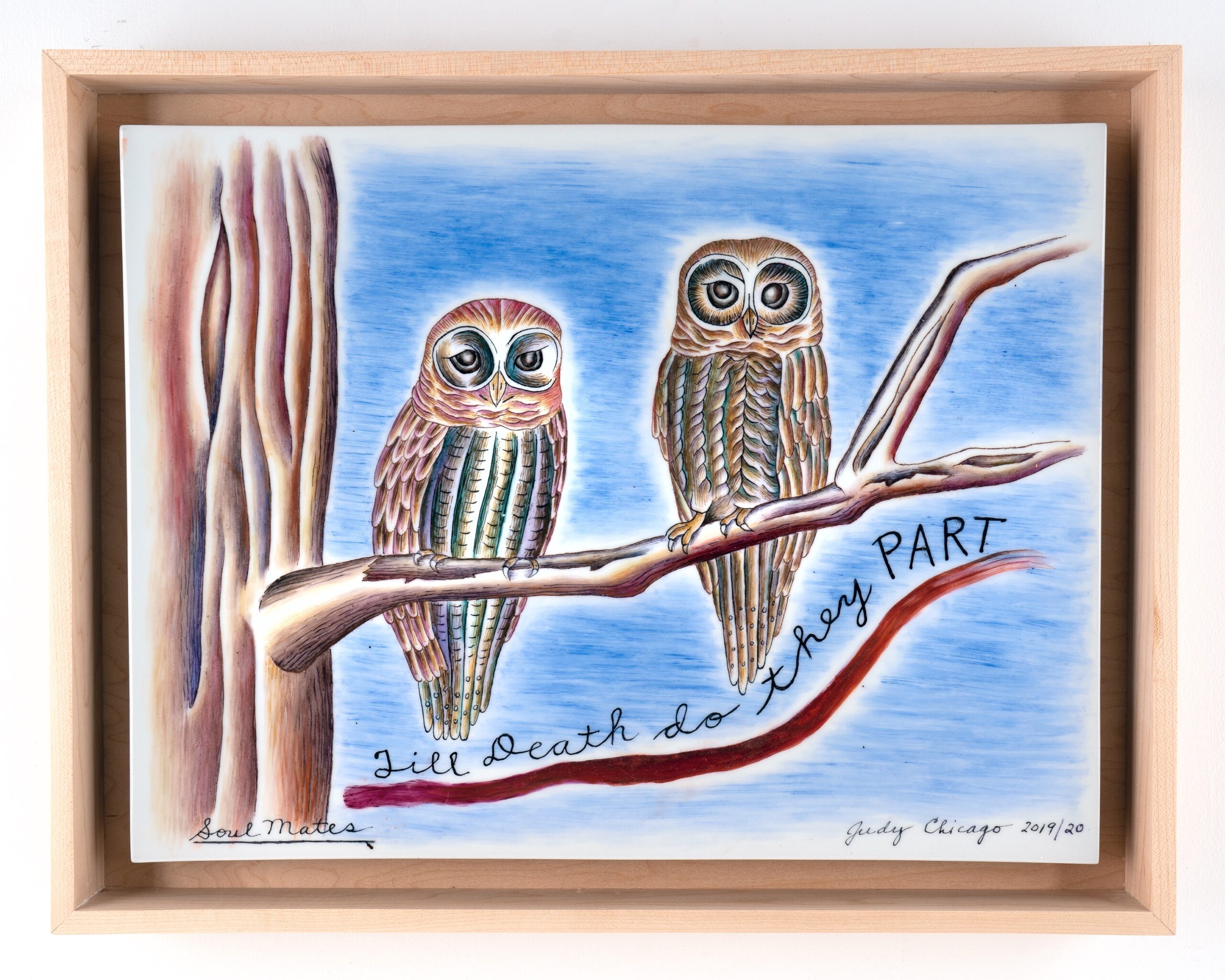 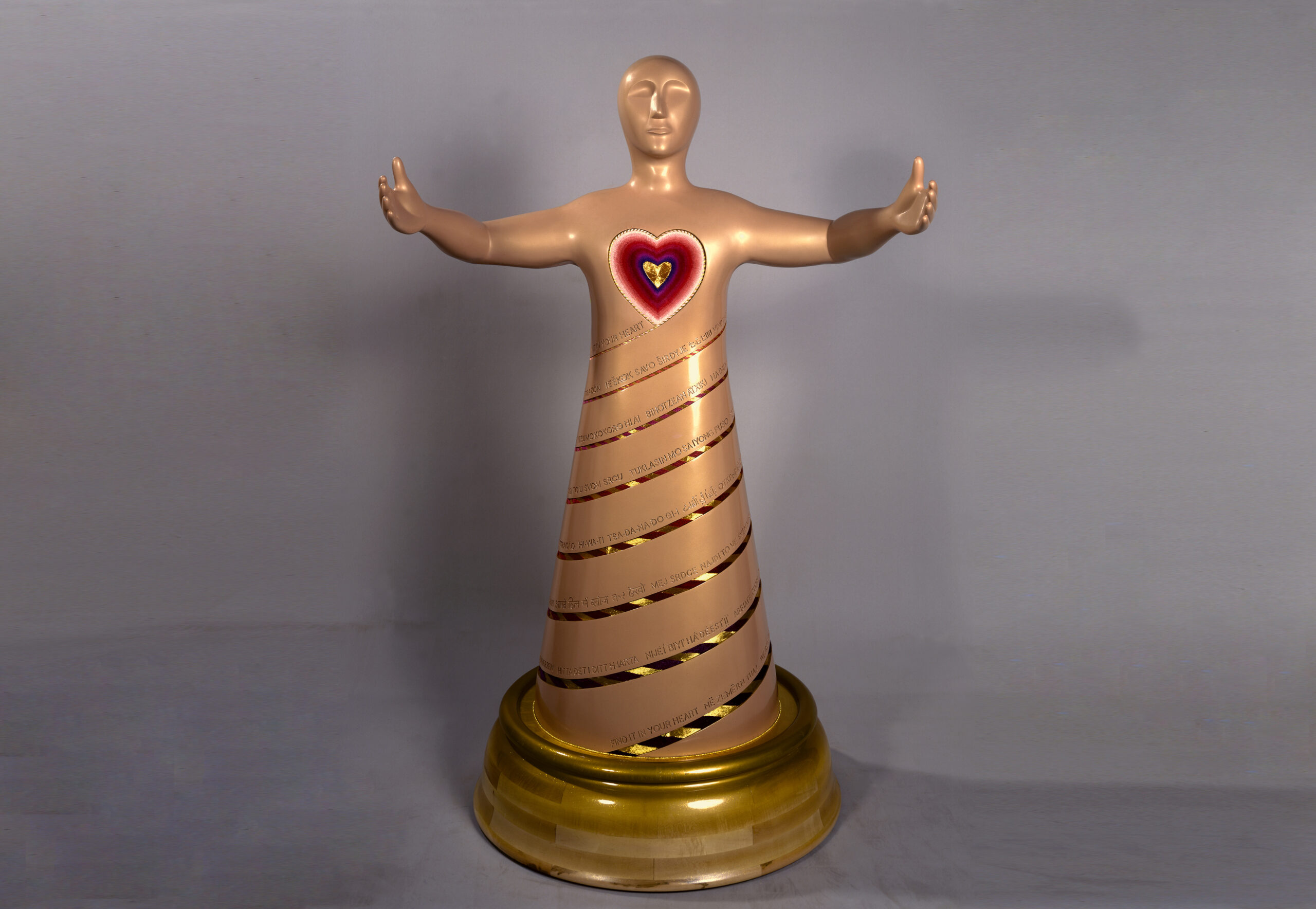