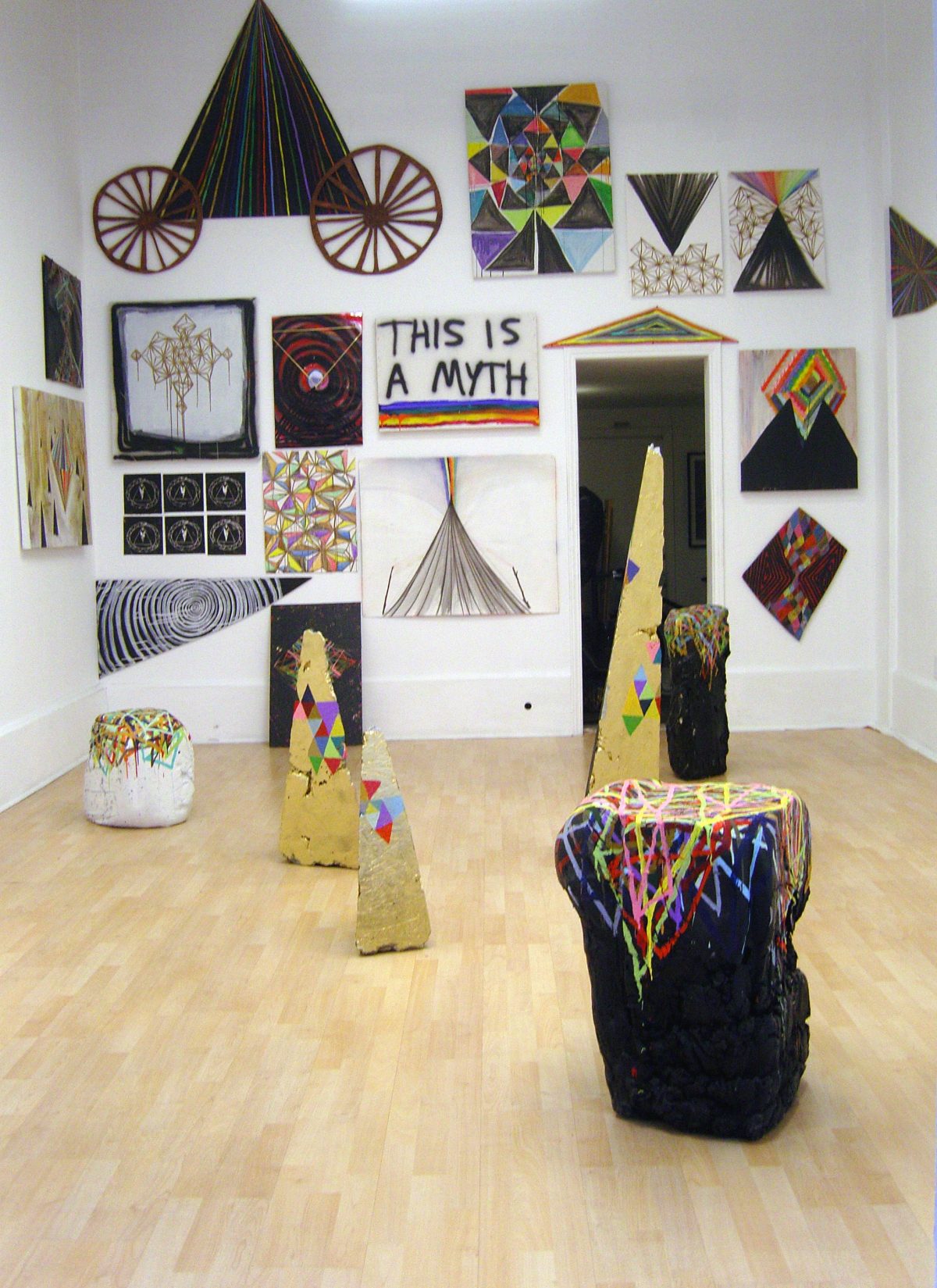 This Is A Myth

Silverman Gallery is pleased to announce the opening of an exhibition of new sculpture and wall-mounted works by Ben Shaffer on view from December 12 – January 17, 2008 with an opening on December 12, 7-10pm. “THIS IS AMYTH” is Shaffer’s second one-person exhibition at the gallery and is themed around the space between chaos and order or rather an attempt to order chaos. “THIS IS A MYTH” embodies Shaffer’s interest in posing questions related to notions of truth, myth, survival and consciousness.

The work produced for “THIS IS A MYTH” contains the artist’s hand perhaps more than ever. Working with concrete, Shaffer sculpts pillar like totems that watch over the room and ouroboros, or serpents swallowing its own tail and forming a circle. Shaffer’s totems are made to live indoor or outdoor and should be treated as sacred, meditative and protective objects. The ouroboros symbolize the cyclic nature of the universe: creation out of destruction, life out of death. The ouroboros has been important in religious and mythological symbolism, alchemical illustrations, and is often associated with Gnosticism and Hermeticism. For “THIS IS A MYTH” the metaphor of the self-sustaining ouroboros foregrounds Shaffer’s interest in renewal and mythology.

“Mother Beard” is one of Shaffer’s concrete sculptures, covered in colorful triangles and shaped like an upward pointing pyramid which represents the monumental, the ancient and powerful, the spiritual and meditative. Associated with the number three, triangles and pyramids have very complex meanings. For instance, a pyramid pointing upwards can symbolize fire and male power while pointing down; it can symbolize water and female sexuality. Throughout “THIS IS A MYTH”, Shaffer highlights the dichotomy inherent in the subtle gesture of turning a shape upside down to change its meaning.

“THIS IS A MYTH” is also the culmination of a monthly email that Shaffer has sent out to a select group of friends. The emails started on December 31, 2007 with this first thought “Written with rainbows all along the bottom a horizon line is now there and the words float above we’re looking all at the same time. This is a Myth.” A collection of all these texts will be available alongside Shaffer’s visual imagery. Spirits made by Shaffer will also be available at the opening. 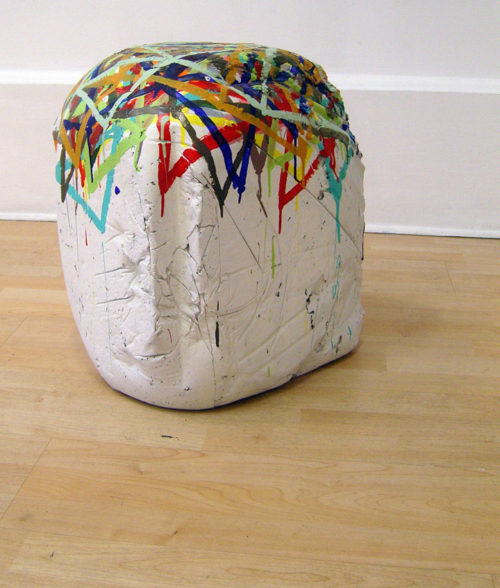 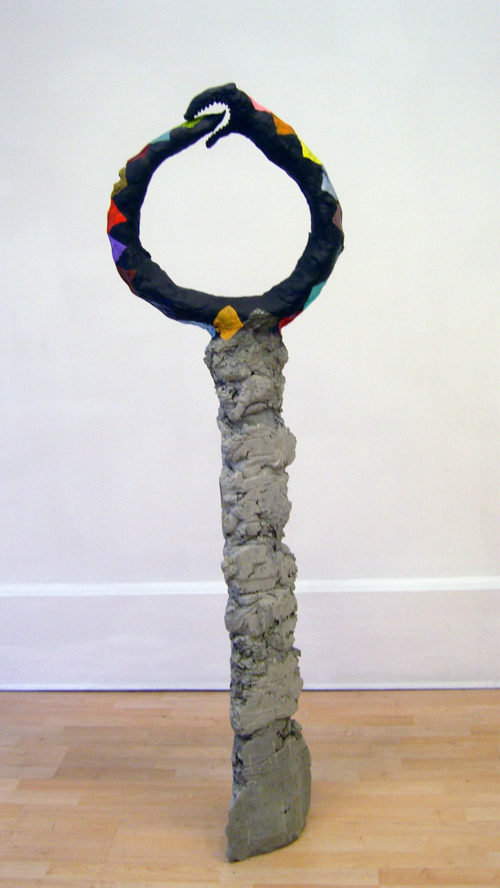 A creature like us
Spray paint, acrylic, magic sculpt on concrete
2008 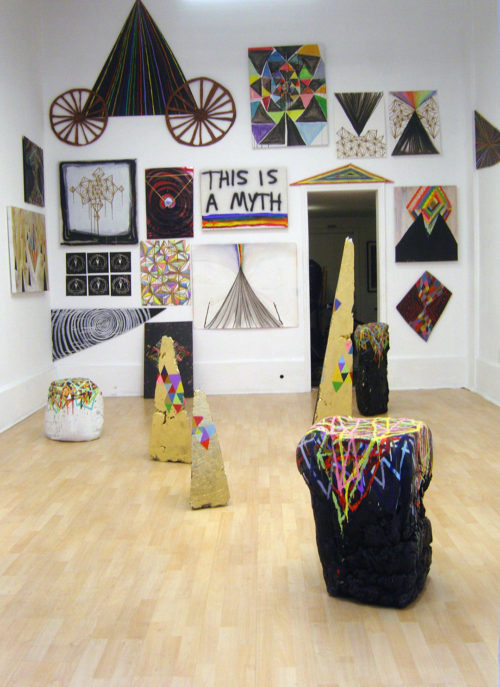 This Is A Myth 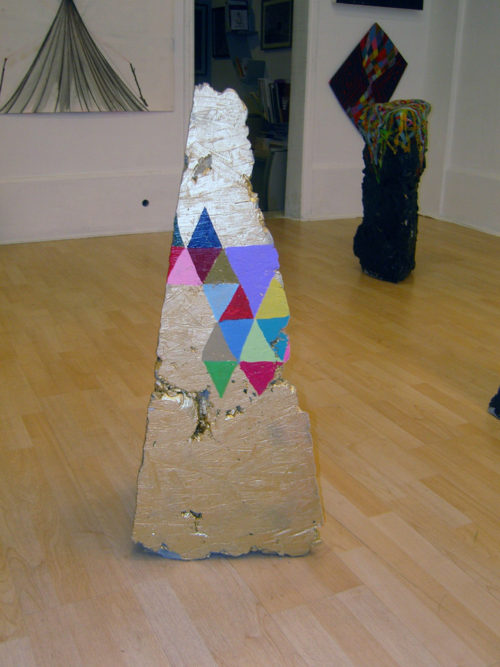 Pyramids of infinite detention, 1
Acrylic and spray paint on concrete 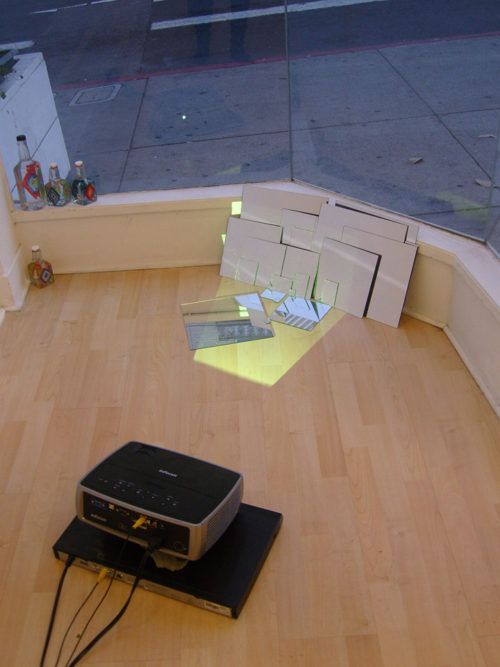 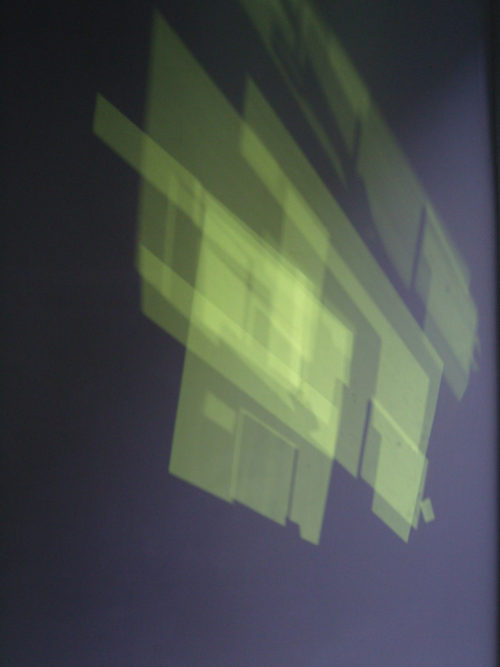