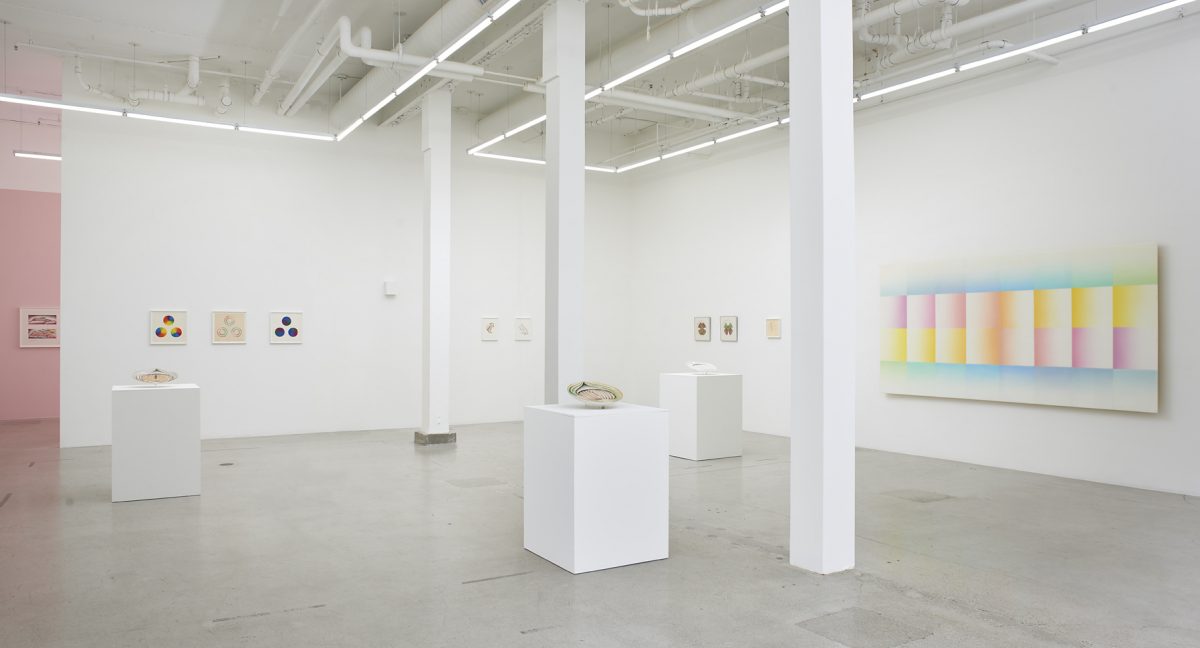 Artist Talk: Judy Chicago will be in conversation with Sarah Thornton on September 10, 7pm at the Jewish Community Center of San Francisco. Tickets for this event, titled “Pussy Power,” are limited and can be purchased here.

Jessica Silverman Gallery is pleased to present “Judy Chicago’s Pussies,” a solo exhibition of paintings, drawings and ceramic plates made between 1968 and 2004, which explore women’s agency, sexuality and feline companions. The exact etymology of “pussy” is unclear, but the term bears witness to the long association of femininity and felinity. About the show’s title, Chicago says, “It wouldn’t have been feasible to call an exhibition ‘Pussies’ before a generation of young women reclaimed the power and humor of the word.”

“Judy Chicago’s Pussies” features Morning Fan (1971), a monumental painting comprised of a grid of self-consciously effeminate pinks, yellows and turquoise blues that pulsate and ultimately succumb to a central void. When Chicago went to auto-body school to learn how to spray paint in the 1960s, she was the only woman in a class of 250 men. She then used the industrial technique for her “Fresno Fans” paintings, made when she was setting up the first Feminist Art program in the USA. “I went to Fresno with the determination to help my students build a professional art practice without having to deny that they were women in their work,” explains Chicago. Like her “smoke pieces” or dry ice environments, the “Fans” merge flesh and landscape. A sublimation of sexual desire through abstraction, and political content through formal concerns, Morning Fan is an icon of feminist minimalism.

The exhibition also includes a range of early works that combine color studies and central core images such as Dome Drawing (1968), Study for Whirling Donuts (1968) and 3 Star Cunts (1969). These circular forms open, close and vibrate through a strategic use of color and shading. While the artist was investigating the optical and emotive effects of color, she was also exploring the question: what does it mean to have a body built around a central void?

By the early seventies, Chicago started to take her central core investigations into figurative territory, including floral forms. In drawings such as Through the Flower Darkly (1973), the central aperture gives way to blue-sky liberation. “Visually and imaginatively, I was moving through a confined space into a bigger one where I had more room to be myself as an artist,” she explains.

Chicago’s floral images mutated into more brazen vaginal forms, culminating in The Dinner Party’s ceramic plates, which metonymically portrayed creative heroines throughout the ages. Three ceramic test plates from the “Dinner Party” sit at the literal center of the “Pussies” show. They represent Hrosvitha, a medieval poet and playwright, known for her accounts of the lives of saints. All three variations of Hrosvitha’s plate embody the beauty of virginity, suggesting a peaceable self-sufficiency or pristine “gold star” sexuality.

The exhibition also features Potent Pussy / Homage to Lamont (1973), which is the first time that Chicago’s central core imagery overlapped with her love of cats. “The association between women and cats dates back to the inquisition when cats were seen as witches’ familiars and the church encouraged people to burn them at the stake,” says Chicago. “Black cats were particularly suspect and Lamont was a black cat.”

Chicago did not grow up with cats. At 23, when she was mourning the sudden death of her first husband, she moved into a house in Santa Monica owned by Frank Gehry. A black kitten, who she later named Little Puss, showed up on her doorstep and won her affection. Through the decades, Chicago’s cats became muses and ciphers for the mystery of identity – roles commemorated in Kitty City, a series of drawings of cats eating, sleeping and making intense eye contact.

Despite her international acclaim, Chicago hasn’t had a solo show in San Francisco since The Dinner Party began its world tour at SFMOMA in 1979. Chicago, now 78, is one of the most important artists of her generation. Her courage and originality have fostered a powerful and distinctive oeuvre. With a new generation of women committed to reinvigorating the feminist movement, the wisdom and relevance of her work is impossible to ignore.

Judy Chicago (b. 1939, Chicago, IL) has work in the collections of the British Museum, Moderna Museet, Tate, Metropolitan Museum of Art, National Gallery, Los Angeles County Museum of Art, Museum of Contemporary Art Los Angeles, Hammer Museum, Getty Trust and Getty Research Institute, San Francisco Museum of Modern Art, and over 25 university art museums such as Brandeis, Cornell, Harvard, Illinois, Michigan, UCLA, Canterbury (New Zealand) and Cambridge (UK). Over the past four years. Chicago’s work has been exhibited in a broad range of major thematic group shows such as “Pacific Standard Time: Made in LA”, “Ends of the Earth” at Haus der Kunst, Berlin, “Pretty Raw: After and Around Helen Frankenthaler” at the Rose Art Museum, Waltham, MA and “The World Goes Pop” at Tate Modern, London. Chicago’s traveling solo exhibition “Why Not Judy Chicago?” was also recently on view at the Musée d’Art Contemporain in Bordeaux, France. Her solo exhibitions “Inside the Dinner Party Studio” at the National Museum of Women in the Arts, Washington, D.C. and “Roots of ‘The Dinner Party’ History in the Making” at the Brooklyn Museum will be on view through early 2018. Her forthcoming monograph will be published by Scala in January 2019. She lives and works in Belen, NM. 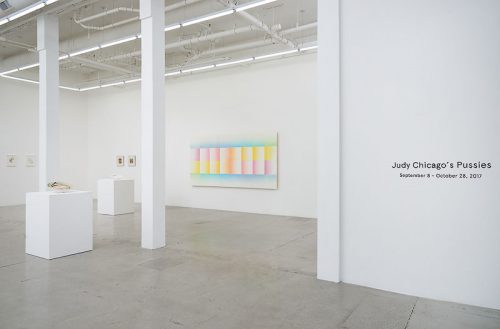 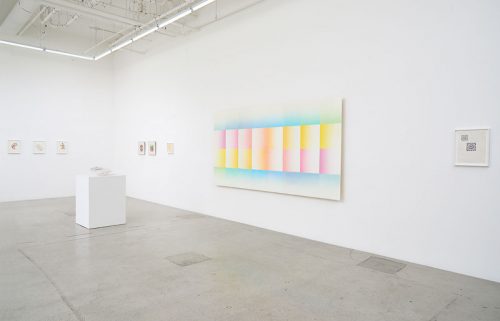 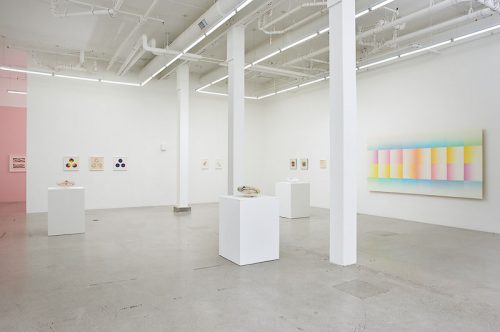 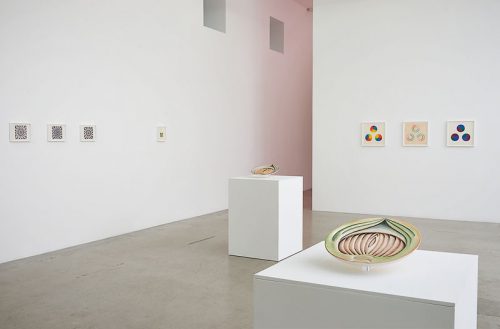 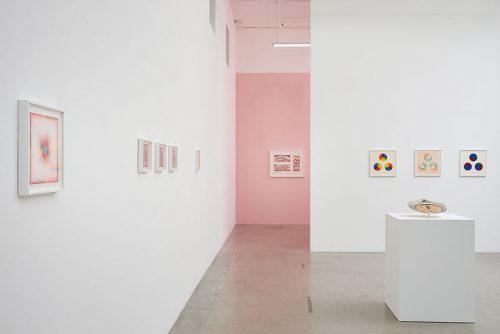 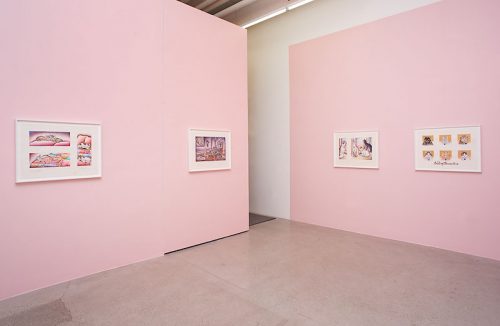 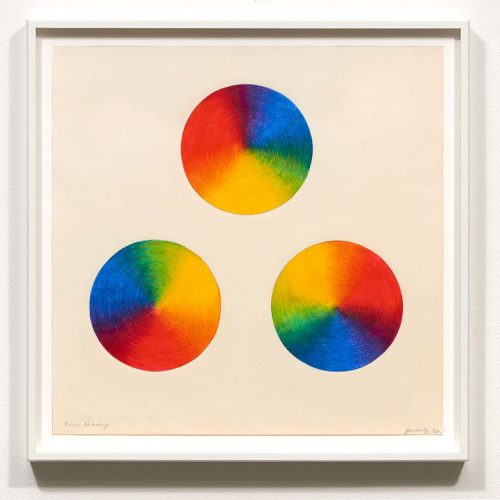 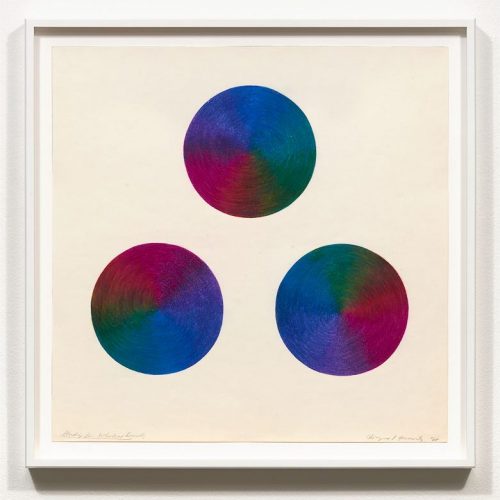 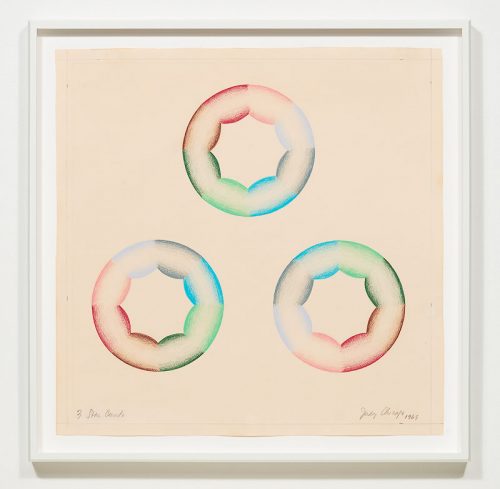 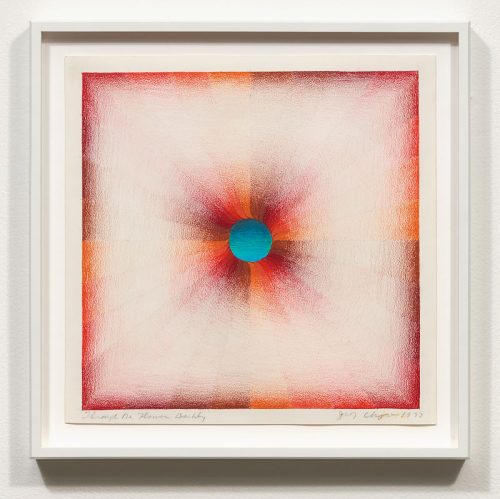 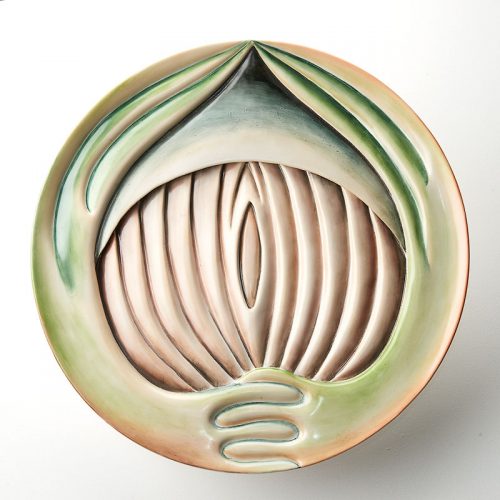 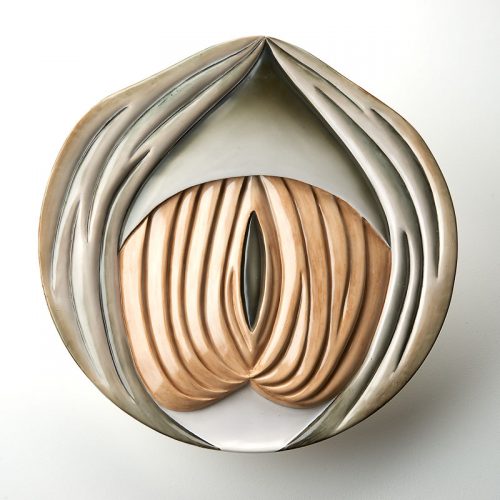 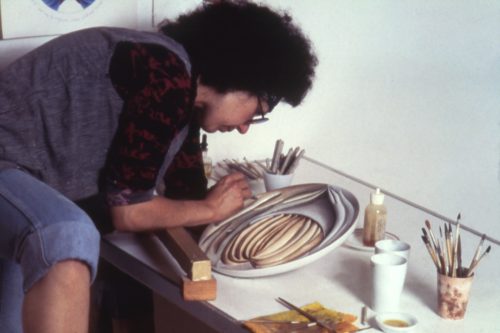 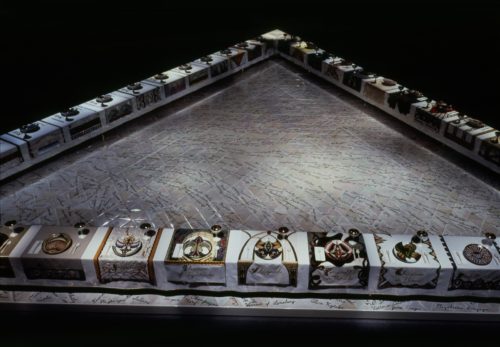 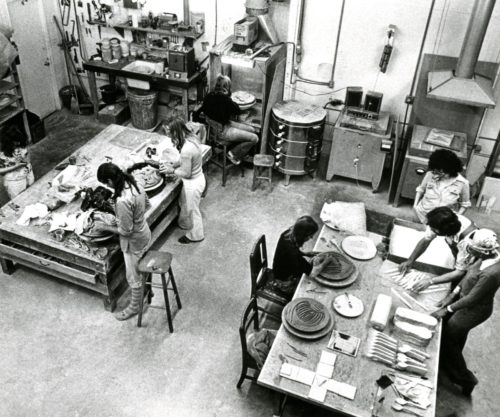 Judy Chicago in the studio with others, preparing for The Dinner Party, 1979 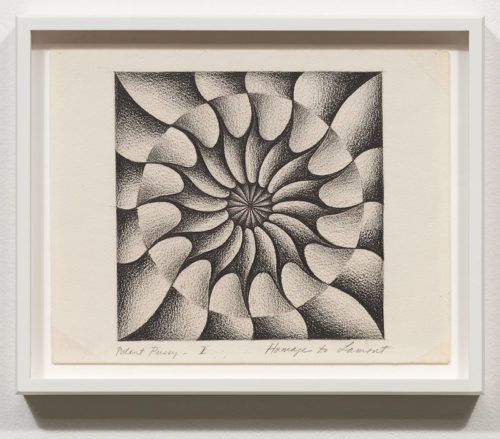 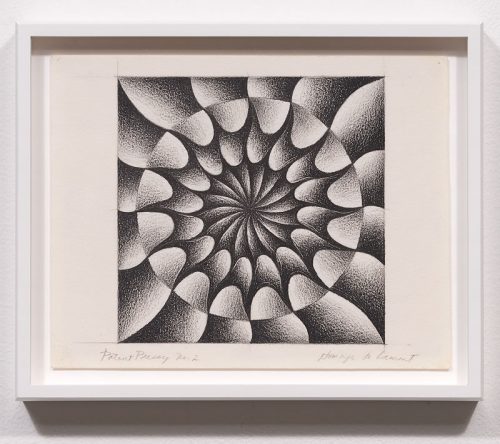 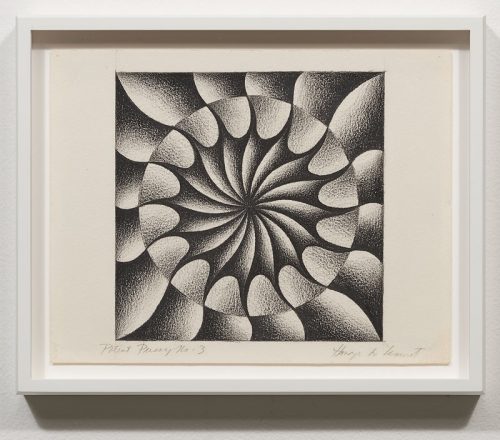 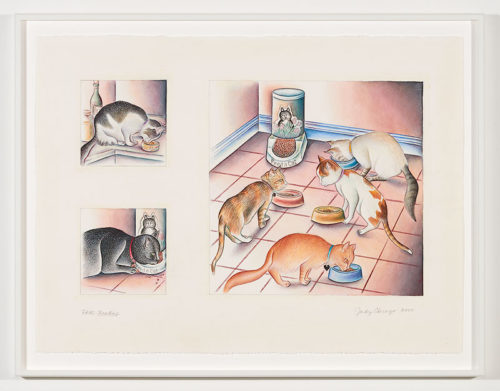 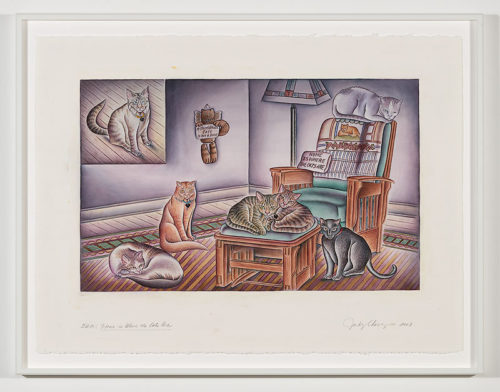 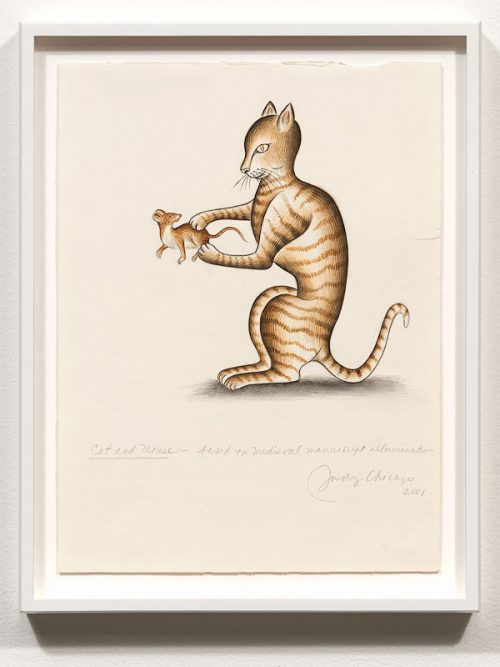 Cat and Mouse, based on Medieval manuscript illumination for Marginalia Illumination
Watercolor on Fabriano
13 3/4 x 10 3/4 inches
2001 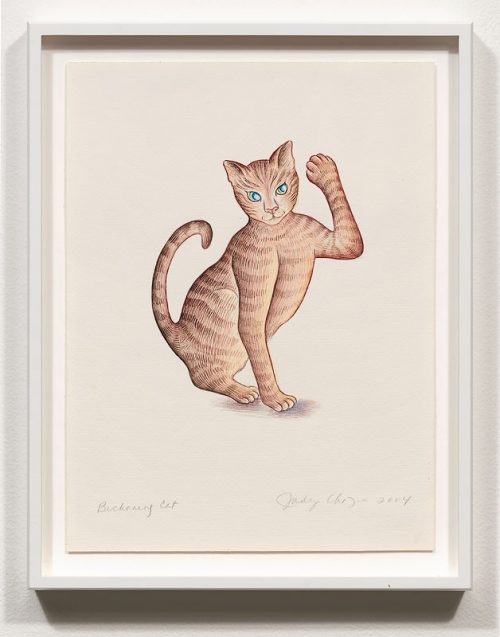 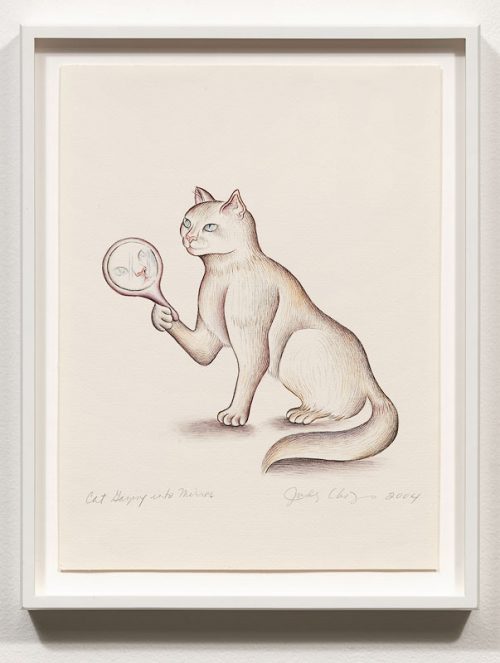